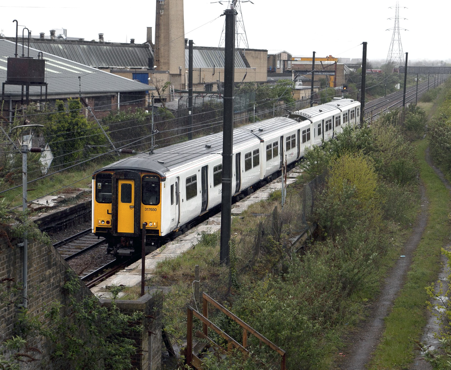 Disused since July 1985, Lea Bridge station was re-opened in May 2016 after a 5-year Railfuture campaign.

In 2012 Railfuture and the Chingford Line Users Association (CLUA) commissioned a report by JR Consulting, to be used in specialist lobbying of key rail industry and political decision-makers for improving access from Waltham Forest to the rail network, in three ways:
The report was made possible with a grant from Railfuture's Fighting Fund.

We have campaigned for changes to achieve a regular all-day/every-day four trains per hour clock-face service for the Lower Lea Valley line, as well as ensure the success of Lea Bridge Station now that it has reopened.

Our parallel campaign to reopen Lea Bridge station began to really take off in 2011, as described in this newsletter article. Then we received some encouraging news from Waltham Forest Council on 29 January 2013.

On 26 March 2013 the Secretary of State for Transport confirmed Lea Bridge as one of just three stations in the country to benefit from the £20m New Stations Fund. Read more about the new stations fund launch in late-January, new stations fund bids in mid-March, and the Transport Secretary's Commons statement in late-March 2013.

On 15 May 2013 the Department for Transport finally confirmed the funding for Lea Bridge station, now planned to re-open by the end of 2015 - 30 years after closure in July 1985. See local press coverage.

On 10 July 2015 new Transport Minister Lord Ahmad of Wimbledon visited the site to mark the start of works and confirm Spring 2016 as the opening date. Read more from the DfT: Lea Bridge works start, and articles in July station campaign success and in August: London station to re-open.

Then in February 2016: Lea Bridge station reopening draws near.

Extracted summary of the 2012 Lea Valley Rail - Better Access to Jobs and Homes report below:

This report shows how much more the existing railways can achieve and contribute to the Lea Valley’s future economic, social and environmental goals.

The Lea Valley requires better connectivity, to help the creation of new jobs and homes and to enable the area’s economic structure to strengthen and grow, with catchments accessible by public transport. This requires smart thinking, better use of existing infrastructure and a few new elements.

The Chingford Line Users Association (CLUA) and Railfuture looked particularly at the Waltham Forest catchments. Waltham Forest is the ‘borough across the Valley’ and needs better integration into the main Lea Valley transport corridors.

JRC was commissioned in March 2012 by CLUA and Railfuture (whose Fighting Fund funded the report) to write an appraisal of three significant rail projects in the Lea Valley, and to set out their merits.

This report responds to that commission. It describes each scheme sequentially, the rationales and merits of the proposals, present status, service plans, foreseeable demand and costs, funding matters and next steps. The report’s structure is:

Practitioners and campaigners will appreciate that securing even small changes in railway services and infrastructure can be a lengthy challenge that needs the best arguments and clarity about the project purpose, and to set out these points to stakeholders, funders and decision-makers. JRC hopes that this report will help the advocates of these rail projects to make the case successfully.

The desired forward timetable for the main projects offers the prospect of continuing improvements in Lea Valley Rail over the next decade, which is in keeping with the wider regeneration and economic growth agenda for the Lea Valley:

2016 Initial stance on project priorities in 2019-24, including the case for Chingford-Stratford.

View or download a presentation about the JRC Report to the CLUA 2012 AGM.

CLUA is the local rail user group which exists to help improve train services between Chingford through Walthamstow and London Liverpool Street, and between the Lea Valley line and Stratford.

We also have a long-term campaign to provide a direct Chingford-Walthamstow-Stratford rail link, by reopening the Hall Farm Curve.

You can contact CLUA to help our campaigning: email roger.gillham at geo2.poptel.org.uk or telephone him on 0845 456 4977.