Bideford via Barnstaple to Exeter

(to become a part of Devon Metro?)


Register your support for this campaign here.

Click to register your support for this and other railway re-openings.

See also Tarka Line - one of several in the Devon and Cornwall Community Rail Partnership. 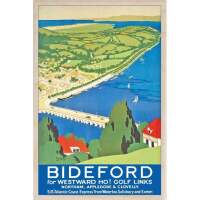 The 9-mile railway from Barnstaple to Bideford closed to regular passenger services on 4th October 1965 - when the population of Bideford was greater than the population of Barnstaple! Freight continued to run, principally clay traffic from Meeth until this was withdrawn in September 1982. While the tracks remained until 1985 attempts were made to reopen the line, as detailed in Bring Back the Trains - The Case for Railway Re-openings, first published by the Railway Development Society (changing its public name in 2000 to Railfuture) in February 1983, and in the April 1984 2nd edition. See Chapter VI pages 31-32 here.

The track was finally lifted in 1985 and the land purchased by Devon County Council for use as a footpath and cycleway. The potential of this line was reiterated in the March 1988, May 1989 and March 1998 publication of the A - Z of Rail Re-openings also published by the Railway Development Society - see RDS books. Bideford-Barnstaple featured too as one of the 26 proposals in the 6-page pamphlet Bring Back our Tracks. Published by the Railway Development Society in June 1996, it can be viewed here. Despite the potential of this route for rail passengers, 22nd April 1987 marked the opening as part of the South West Coastal Path by the Rt. Honourable William Waldegrave, Environment Minister.

By 2020 the population of 'Greater Bideford' (Appledore, Bideford, Northam, and Westward Ho!) was estimated to be over 31,000 (sources: Bideford and Northam) having continued to grow by about 3,000 per decade since the trackbed was converted to become the Tarka Trail. The 9-mile extension of the Exeter - Barnstaple railway to Bideford would add substantially to its effective catchment area. The journey time could be 10 minutes from Barnstaple to Bideford. With some relatively modest line upgrading a 70-minute journey time between Exeter Central and Bideford could be possible. Compared to the Barnstaple to Bideford bus link the rail service would then save around 45 to 55 minutes, although still be only marginally better than the journey-time by car.

Accordingly the case for restoring a rail service to Bideford appears strong. In 1992 Railway Development Society volunteers conducted a site survey of the route to determine whether the former line could be reopened, as one of the options for re-establishing a mainline rail link between Barnstaple and Bideford for through services to and from Exeter.

Additional work has been done since that date, 30 years ago now, to check for changes. The main problem has been the installation of a sewer pipeline beneath the trackbed between Instow and Bideford. Other challenges, which are fortunately few, relate to the overlay of the Tarka Trail tourist initiative on to this closed section of the North Devon main line. Although the route was never built for double track it was originally broad gauge to the outskirts of Bideford, so potentially aiding the rebuilding of the Tarka Trail footpath and cyclepath alongside.

The station at Bideford remains as two distinct halves to either side of the Railway Terrace underbridge. The northern half has two remaining platforms opposite the Royal Hotel and the down line one on the east side could be restored and extended northwards for railway use but would cut the public footpath "Emberys Drang" in half. A new platform on the west side of the formation between Emberys Drang and Old Barnstaple Road would have step-free access at either end, with the road at the northern access wide enough to facilitate taxi and kiss-and-ride pull-in. South of the underbridge the Bideford Railway Heritage Centre CIC are restoring the remainder of the station as a museum, but the station building itself is owned by the Royal Hotel and there would be no parking available. As Bideford now covers an expanding area many potential rail users would use their own vehicles to get to the railway; a new parkway station could be built below the new Torridge Bridge. This would serve the outer west side of Bideford along with Northam, Appledore and Westward Ho!

Beyond the station two overbridges appear to have sufficient width to keep a narrow path alongside the railway, but beyond this point there would be no apparent difficulty in building a full width path alongside as seen from the High Level Bridge. As the railway trackbed approaches Tapely Park 1¾ miles from Bideford there is some narrowing of available land and a building relating to a jetty may need to be modified. This had appeared by 1996 subsequent to the 1992 survey.

From 2½ to 3¼ miles north of Bideford the only major difficulties are encountered on the line, these being the cutting immediately south of Instow station and the tunnel north of the station. While there appears to be space for both the path and railway to be alongside at Instow station and it may be considered worth modifying the cutting south of the station to avoid diverting the path onto the main road, that would not be straightforward. There is no space for the path through Instow Tunnel and accordingly the Tarka Trail could face the unwelcome prospect of the need to be diverted at this point, as widening the tunnel or decking this section of the railway would be expensive. As Instow provides local services it has been suggested by some that the road along the river front is made safe for the cyclepath. This could then mean restricting traffic, except buses and making more use of the 'Back Road' or B3233. The Back Road appears to have sufficient width for an additional cyclepath to be built so that users of the Tarka Trail would have two alternatives to compensate for the loss of the Instow Tunnel section. A new station for Instow, were a sufficient business case for one to justify it, might be built on the north side of the village as it would be easier to provide car parking and there would be less disruption to the Tarka Trail.

Beyond Instow over the last 5¾ miles to Barnstaple the trackbed is wide so that the path could be rebuilt alongside the railway. Overbridges at Fremington appear to be of sufficient width as are the gently-sloped railway cuttings. The railway bridge over the Fremington Pill remains, but as it is of single track width a new bridge for the path would be required. A parallel bridge for the long-standing footpath was originally built onto the railway structure, but was removed at sometime between the 1992 and 1996 survey of the route. On the final miles into Barnstaple some culverts beneath the low railway embankment extend beyond the width of the railway formation, so widening would likely be easier here.

It was concluded that track reinstatement from Barnstaple to Bideford could be achieved, and that the advantages of a passenger service over the line would be high. The re-opening would increase use of the North Devon main line from Exeter to Barnstaple, and in turn the services on this line. No major threat to the integrity of the trackbed has been identified since the Barnstaple Western Bypass was built above the trackbed, fortunately at a height which could incorporate a bridge.