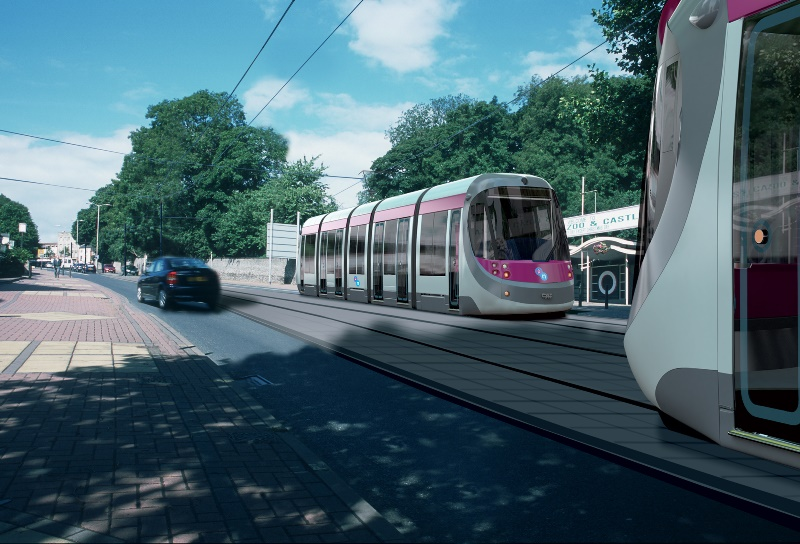 Railfuture welcomes the news that funding has been secured to extend the Midland Metro from Wednesbury to Brierley Hill. The metro will serve Dudley Zoo and Castle – image by Midland Metro Alliance.

The extension to Brierley Hill was originally approved by the Secretary of State for Transport on the 20th December 2004, which was only 5 years after the original Metro opened. However the powers to compulsorily purchase land by the Transport and Works Order expired in March 2010. The scheme was unfunded but this has all changed following the election in 2017 of the West Midlands Mayor, who has been committed to ensuring the funding is secured and the fact that it provides connectivity to HS2. The scheme was recognised in the document “HS2 Unlocking the Benefits, West Midlands Connectivity Package” produced by Centro in 2013.

The extension also had the support of the Association of Black Country Local Authorities and the Statement of Case promoted by the West Midlands Combined Authority noted:

“it is vital to the future economic well being of Dudley and Sandwell, the Black Country and indeed the wider west Midlands and that it will help to unlock and support regeneration projects across the boroughs of Sandwell and Dudley encompassing commercial, residential, employment, educational and visitor economy developments. Crucially it will also play a key role in enhancing the development potential of the recently launched DY5 Enterprise Zone in Brierley Hill. This is projected to create 7000 jobs and 300 new businesses.”

In addition to the opportunities mentioned above the Statement of Case stated that the new line would provide access to three Universities, 3 Further Education Colleges and two hospitals.

Finally paragraph 11.77 stated “Congestion is a major issue in the Black Country affecting both car and bus journey times. The unreliability of highway journey times currently acts as a barrier to employment for many residents of Sandwell and Dudley. Despite the provision of some bus priority measures, the impacts of road congestion on bus-based public transport services can be significant with both extended journey times and unreliable service frequencies. The WBHE is expected to provide a more reliable, higher quality mode of transport within the Black Country and between the Black Country and Birmingham principally by segregating the public transport service, and where not possible, by providing high levels of priority for Metro. A journey time comparison between the Metro route and existing bus routes servicing Birmingham City Centre show that with the WBHE in place, public transport times are expected to reduce by around 50%.“

As someone who lives in the Dudley MBC Area this Metro extension at last enables Dudley and Brierley Hill to be connected to the rail network. Dudley Town Centre could promote itself more as a tourist attraction as it has a Castle, Zoo and the Black Country Museum. Furthermore Dudley and Brierley Hill are in urgent need of regeneration. The Merry Hill Shopping Centre is almost totally car reliant and therefore suffers traffic congestion. It will be served by the new Metro link.

The 11km extension will branch off the current West Midlands Metro line just east of the Wednesbury Great Western Street Metro stop, before heading through Tipton and Dudley on its way to Brierley Hill. The section from Dudley to Brierley Hill will be on street and serve Dudley Bus Station. There are plans for up to 17 Metro stops (including a number of provisional ones).

Investigations are taking place as to whether sections of the route can be operated using batteries rather than traditional overhead wires. An additional Metro depot will be needed to accommodate the extended fleet of trams that will run services on all of the planned extensions. Passenger services are expected to start in 2023.

There have been concerns raised about the effect of a light rail tram scheme on the Walsall-Stourbridge corridor where there is a disused railway line which remains intact. Objections were made to the 2005 Order on the basis an existing rail corridor would be lost. As part of the combined Authority’s Statement of Case the submitted documents included the Black Country Rapid Transit Strategy 2015 which considered the heavy rail option. This report noted that the reinstatement of the Stourbridge-Walsall corridor did not feature over the next 5 Control Periods (25 years) and would require Network Rail “buy in” which could pose a significant risk to delivery. Furthermore this reinstatement was not required to address capacity in the region.

Paragraph 5.15 of the report stated “Walsall to Stourbridge tram-train/VLRT.
This would involve northern and southern extensions to the Wednesbury to Brierley Hill Extension and would be contingent upon the approval of the use of tram-train or VLRT technology. It would also need to be consistent with any plans to re-open the line for freight in the future.”

Railfuture’s West Midlands branch has at its quarterly meetings with the WM Combined Authority and West Midlands Rail Executive supported the Metro extension provided that provision for heavy rail is retained.

Phil Hewitt WM Metro Director confirmed this in Rail magazine issue 874 w/c 13th March 2019 by stating “There is potential to share the route with rail freight traffic and as when bridges on the line are being refurbished or replaced, they will be constructed to be able to handle heavy rail.”

It is therefore clear that future heavy rail operation is not precluded by Midland Metro.

In January 2018 Railfuture attended an open meeting entitled “Ask Andy” at Dudley College when the Mayor, Andy Street invited the audience to ask questions. Our representative said Railfuture supported the Metro Extension and this has been our approach as it delivers a scheme which takes people where they need to go, and so has wide support amongst key stakeholders as demonstrated above.