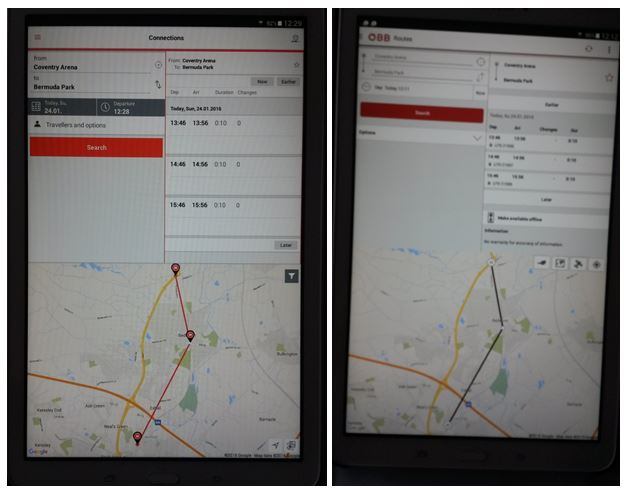 Ever wanted to send someone to Coventry? Well, the railway can certainly help you do that. The city is served by fast frequent trains. But supposing you wanted to send them to Coventry Arena? Well, that’s a different matter - unless you are using German (left) or Austrian (right) apps and sites because they know precisely where the stations are, as the map on their apps proves.
A new station to serve Coventry’s Ricoh Arena has been proposed for many years. The planning, construction and certification process have all taken time but everyone knew it was coming.

Finally, on Monday 18 January 2016, after several false starts, Coventry Arena and its near neighbour Bermuda Park stations (they are on either side of Bedworth station) finally opened. Railfuture wrote an article “White NUCKLE Ride” to celebrate the openings and, providing that you don’t want to travel on a match day, when the trains serving Coventry Arena cannot cope with numbers, the service is there to use.

But try looking for train times at these stations. Try buying a ticket. It doesn’t matter whether you use a web-site, a mobile app, ticket vending machine or speak to a call centre, you may find they do not exist. Your chance of getting information and a ticket depends on who you ask and to frustrated passengers it feels like pot luck. This is truly an example of the failure of Britain’s fragmented railway.

It’s not just stations opening a few days ago that the railway ‘system’ seems not to have heard about. On Sunday 13 December 2015 Cranbrook station opened, as did Apperley Bridge. They coincided with the annual timetable change, where every ticket machine and web-site in the country needed to be updated.

Not only did Cranbrook and Apperley Bridge stations not exist but neither did Oxford Parkway (26 October) or the seven Borders Railway stations (Tweedbank, Galashiels, Stow, Gorebridge, Newtongrange, Eskbank and Shawfair) that opened on Sunday 6th September, more than three months earlier.

Moreover, all of these systems needed to be changed on Saturday 2 January 2016 for the annual fare increases. Probably the worst culprit was Abellio Greater Anglia. Its ticket vending machines (TVMs) and app did not have a single new station that opened since Energlyn & Churchill Park on 8th December 2013 – more than two years ago. As well as those already mentioned, AGA systems are unware of James Cook University Hospital (17 May 2014), Pye Corner (15 December 2014), Ebbw Vale Town (17 May 2015) or Newcourt (4 June 2015).

Because of AGA’s reputation, Railfuture conducted at test at Stansted Airport, one of the stations it manages, on 22 January. There are some high-quality ticket and information machines close of the luggage carousels. It was an opportunity to use the information machine (pictured below) speak to a person, remotely using a CCTV link. Coventry Arena did not appear on their system, but Coventry did.

At the ticket office close to the check-in desks the two new stations were known. This was also the case at the gate-line before the railway platforms where the assistant kindly checked their portable device. However, none of the TVMs listed the recently opened stations mentioned above.

Looking at the AGA mobile app, which is efficient and easy-to-use, obviously works from the same list as its TVMs, as the following screen shots show:

Railfuture had been monitoring TVMs for some time, and discovered in mid-December that Great Northern was showing the Borders Railway stations. Railfuture reported the omission and got a helpful response back from AGA:

The day after Coventry Arena and Bermuda Park opened Railfuture stated to check well-known web-sites and apps to see which listed the stations, Out of 12, only half did:

Railfuture welcomes the rail industry’s commitment to opening up its computer system to independent developers, and this has seen the creation of some fantastic web-sites and apps. However, they cannot be taking their information from the same sources. It is disappointing that the otherwise excellent www.brfares.com didn’t have the new stations several days after opening (although it did have all of the other stations).

Railfuture’s media spokesman Bruce Williamson issued a Press Release  and was interviewed on BBC Radio Coventry and Warwickshire  (click link to hear recording) and the story was picked up by newspaper including the Daily Telegraph.

So, does this ‘oversight’ really matter to passengers, or is it just making a fuss over nothing much?

It may be a case of knowing which web-sites are reliable (this includes the German and Austrian ones!) and avoiding the others: www.nationalrail.co.uk was correct from the outset but half of the TOCs' own sites were not. Moreover,  www.thetrainline.com is promoted heavily in advertising especially on television and many people use it first. Within 24 hours of Railfuture making the news TrainLine had been updated for the new stations.

If passengers cannot rely on the information that the railway provides then they will lose confidence and the railway may well lose their custom. But there are consumer issues here too.

Revenue inspectors are eager to pounce when a passenger has innocently bought the wrong ticket, and at times it feels like being ‘guilty until proven innocent’. What should a passenger do if they arrive at an unstaffed station and the TVM will not sell them a ticket to their destination? Do they buy a ticket for the closest station before and risk a penalty, or the closest station after and pay over the odds because of the railway’s incompetence? Would they even know what was a nearby station? Should they get on the train without a ticket and hope to pay later but spend their journey in fear that they will have to argue their case?

Because of inaccurate TVMs passengers may unwittingly buy the ticket for a different station.  Is it the passenger’s fault if they want Apperley Bridge and they buy a ticket for Appley Bridge assuming, quite reasonably, that either they did not know how to spell it or there is a typo in the ticketing system?

Our lives rely upon computer systems. They are easy to update and there is no justification for any system not showing information and fares for all of the approximately 2,550 stations on Britain’s rail network.

Railfuture is an independent campaigning organisation. It is not resourced to take up passengers’ complaints with train companies (Transport Focus is the statutory consumer body) but it seeks to persuade them to improve the railway so that complaints do not happen in the first place. We are run entirely by volunteers and rely upon annual membership fees from our thousands of members across Britain, and beyond. Please consider joining Railfuture to show your support.

Railfuture has been in contact with Paul Kelly who is behind the www.brfares.com  fares site and the www.brtimes.com timetable set as well as being jointly responsible for the www.fastjp.com journey planning web-site. He explained that although timetable information is supplied on a weekly basis, ATOC only provides fare data about three times a year, unless the subscriber is paying a large licence fee. Therefore www.brfares.com will not show fares for Coventry Arena and Bermuda Park until May 2016. Frustratingly ATOC’s fare data in 2015 did show data for those two stations (as they had been expected to open) but removed them from the January release. It does know about Ilkeston station, which opens later in 2016.


UPDATE: On 24th May 2016: Railfuture had chased Abellio Greater Anglia (AGA) about its TVMs and mobile apps not showing stations opened for 28 months, even raising it face-to-face with Managing Director Jamie Burles. Its web-site was fixed in spring 2016 and it even knew about Lea Bridge station when it opened on 15th May. Railfuture had been trying the TVMs and app about once a week and discovered on 24th May that all of the missing stations (and even Lea Bridge) are now showing. In a meeting with the Office of Rail and Road, Railfuture was told that the out-of-date TVMs are a result of TOCs having a different supply chain so the discrepancies will recur, unfortunately.