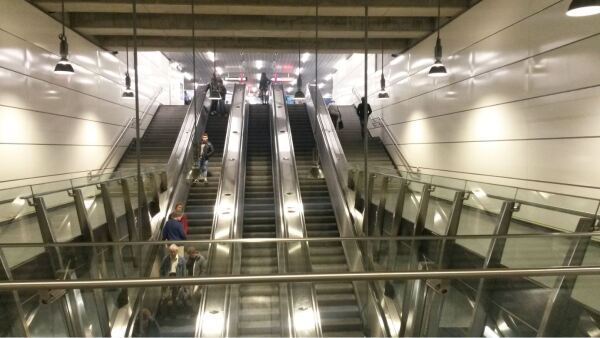 Vienna's modern underground system relies upon far fewer customer-facing staff than London Underground but is enormously popular and well-run. It has plenty of space for passengers to move around without the need for staff to prevent overcrowding. If only London had this luxury.
On 26th July 2014 the RMT union will be staging a half-day conference in London on the future of London Underground. The event is part of its response to proposals by Transport for London (TfL) to introduce from 2015 an all-night Tube service on some lines at weekends (see note at end) and to move staff from behind a glass window (in a ticket office) into the open where they can directly help the public.

The proposed changes have been controversial (they will result in reduced staffing overall) and led to strikes by Tube staff earlier in 2014. Surprisingly neither side has compared the proposal to how public transport systems are run elsewhere. Fortunately Railfuture has a considerable amount of experience of rail-based transport systems around the world and is able to shed some light on the matter, if not address all concerns.

Railfuture director Jerry Alderson, who has been a daily commuter into London and has spent more than 15 months working in Austria’s capital city, Vienna, gives his insight

For several years almost all travellers on the London Underground have been using the iconic Oyster smartcards. With ticket machines being available everywhere only a tiny minority now visit staff at glass-windowed ticket offices. Because of this change in customer behaviour TfL is proposing to use staff in a different way, moving them to where the passengers are rather than making passengers go to them. One might call it being customer focused. Others might see it solely as cost cutting or a chance to raise revenue by creating more retail space.

TfL has promised indefinitely to retain continuous staffing at every single underground station throughout the hours of service. In contrast Vienna does nothing of the kind and operates, apparently very successfully, with very minimal staffing on both its underground and over-ground trains.

The entire public transport system in Vienna is integrated under one organisation, Wiener Linien, although the state-owned rail operator ÖBB runs the railway. It is so tightly knit that the largely underground U-Bahn system and above ground S-Bahn trains can be considered a single service.

The entire railway has driver-only operation, whereby the driver is the only member of staff on any train (ticket checks normally occur at the stations rather than on the trains). They control the doors and lookout for passengers boarding and alighting at platforms. Stations do not have staff to dispatch trains at any stations and no-one shouts out ‘mind the gap.’

Train services are very intensive and punctuality is exceedingly high. Time is not lost by a guard having to manage the doors or a dispatcher giving the ‘right away’. Dwell times at some stations can be as short as 25 seconds. There are few occasions when passengers will see any operational railway staff at any station apart from cleaners. Almost all of the U-Bahn stations are 100% unstaffed.

There are virtually no ticket offices at any S-Bahn or U-Bahn station, despite the transport system being very heavily used. In fact the Vienna U-Bahn has one of the highest per capita riderships of any metro system in the world. There are just a handful of ticket offices and information centres across the entire Viennese network, and these tend to be at the main tourist points. Amazingly Vienna International Airport's railway station, which is heavily used by tourists, is totally unstaffed, although staff sell expensive train tickets (for their Heathrow Express equivalent service) within the airport terminal (at the luggage carousel) and immediately after walking through customs.

Whilst there is a lot of graffiti, which is common on the European mainland, travel on public transport is incredibly safe overall both in terms of crime and accidents.  In fact the U-Bahn operates 24 hours a day at the weekends, i.e. it does not stop on either Friday or Saturday night, operating for 68 hours non-stop.

Everything that TfL is proposing is common-place in Vienna and appears to work so well that one might ask why TfL doesn’t emulate the Austrians and just abolish virtually all customer-facing staff everywhere.

There are two reasons why London cannot do that: ticketing and safety concerns.

London is geographically much larger than Vienna. Whilst Vienna has a single travel zone covering the whole capital, London has six main zones, plus outer zones. This introduces a lot of complexity into ticket purchases and assistance is often needed. In addition all of Vienna’s ticket machines are multi-lingual with seven languages to choose from – those in London generally only offer English. Moreover, annual season tickets are so cheap in Vienna (just €1 a day for unlimited travel on all modes) that many people have one. In London because transport is more expensive people tend only to buy when they need to so many more transactions occur per user.

Vienna has an infrastructure advantage over London. Its U-Bahn system is modern. Although some parts have been created from the Stadtbahn (city railway) created about 140 years ago, most of it has only been built in the last 35 years. Many of the railway stations have been razed to the ground and completely re-built. Vienna’s transport system has had a sustained level of investment that London’s users could only dream about.

Trains (U-Bahn and S-Bahn) are wider, benefiting from a generous loading gauge, so people are not so tightly packed in. Platforms are generally much wider and the whole system is much less cramped with very spacious walkways. There is freedom to move around and staff are not needed to prevent dangerous levels of overcrowding as frequently seen at London’s Tube stations. Their stations have almost everything duplicated to provide both capacity and resilience. There are entrances at both ends of stations, multiple lifts, multiple independent escalators and so on. Unlike London, Vienna doesn’t need to close an entire Underground station for nine months because an escalator is being refurbished.

A crucial difference is that Vienna’s stations have no ticket barriers anywhere and only occasional manned lines of ticket inspectors. This is an incredible experience for Britons where not paying for your travel is a cardinal sin. In Vienna the greater sin is in not using public transport. The lack of gates means that queues do not build up, and there is no risk of someone being trapped between barriers and needing to be rescued.

One could argue that the London underground has the wrong type of ticket barriers. The Brussels metro system previously had no barriers at all but they were re-introduced around 2010 and yet no staff are around to help people. This is because the barriers move sideways like lift doors (which are, of course, not manned) so that people cannot get trapped. It even supports wheelchair users as special pairs of ‘entry and exit’ barriers are provided.

In conclusion what TfL is proposing will seem perfectly acceptable and sensible to someone who lives in Vienna and other great cities. Providing that TfL does not go as far as the Viennese in completely abolishing staff almost everywhere, and least not until substantial investment occurs, it is likely that most Londoners will come to accept and appreciate the changes.


Update to Article: Tube Service Through the Night

On 24th September 2014 TfL announced the starting date for its non-stop weekend Tube service. From 12th September 2015 the 'Night Tube' was intended to start (although this has now been pushed back to 2016 because of a failure to reach agreement with the unions in time). Instead of lines closing from 01:00 to 05:00, the modernised lines will operate throughout the night on Saturday and Sunday mornings with a service of six trains an hour. This will apply to the Victoria, Jubilee, Central, Piccadilly and Northern lines (see map below). In the centre the Northern line will have eight trains an hour. Some of the lines will have a less frequent service at their extremities.

A map from Transport for London showing the lines that would be part of the first phase of the Night Tube.

Many Brussels Metro stations are completely unstaffed despite the entire system having barriers for revenue protection. Special sliding barriers with double-doors are provided for wheelchair users and their carer (or for a parent with a child in a pram).

Timetable at a U-Bahn station in Vienna showing four trains an hour running between 01:00 and 05:00 on Saturday and Sunday mornings, having been introduced in 2010. This is less than the planned six trains an hour in London but it is city four times bigger.