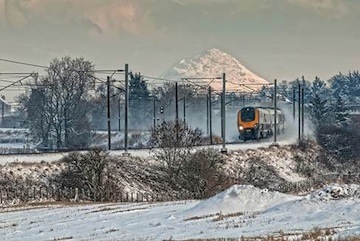 An Edinburgh-based train driver has won a European transport photography competition for his stunning photograph of a passenger train near Ballencrieff.

His image of the CrossCountry train was judged alongside other finalists’ images from across the Arriva group for the annual award. His eye for a picture netted him a total of £675 in prizes from Arriva’s photo competition this year.

Stephen, aged 44, from Gullane, East Lothian, said: “I can remember that day was very cold and I was standing in a foot and a half of snow to get the photo.”

Stephen has been interested in photography for 20 years, starting after a friend introduced him to the hobby. He favours a Nikon D3 camera, however his winning image was taken with a Nikon D200 with a telephoto lens.

The competition, open to all 47,500 Arriva employees across 12 countries, receives hundreds of entries every year from staff across Europe.

James Dark of New Transit magazine, which judged the competition, said: "Of course the picture captured perfectly the glorious surroundings that can make travelling by train a real joy."

All winning photos, and runners up, are available to view on pictures

Arriva is part of Deutsche Bahn, and has UK headquarters in Sunderland. It runs Chiltern Railways, Arriva Trains Wales, Cross Country and the London Overground,