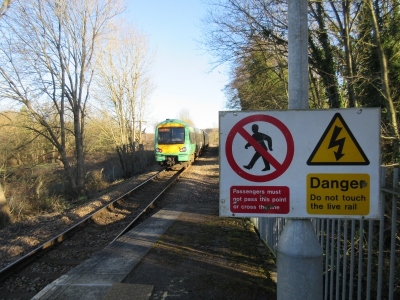 Railfuture is campaigning for reinstatement of a rail link between Uckfield and Lewes to support growth with sustainable transport and provide quicker, higher-capacity and more convenient access between the Weald and the employment centre of Brighton.

It would also be an additional Sussex Coast-London route to relieve the Brighton Main Line during disruption.

We also advocate electrification of the Uckfield line to improve reliability and accelerate services. This became a recommendation of the 2017 Gibb report.
Read Electrify Uckfield! and our article Southern could be buzzin'.
On 31 May 2022 Lewes District Council published a Summary Report on the Issues and Options consultation last summer. Railfuture's reaction to it can be read on page 5 of the June edition of our branch newsletter railse, no.156.

From 9 July to 3 September 2021 Lewes District Council consulted on Issues and Options for the next Local Plan; here is Railfuture's response. To encourage modal shift towards more sustainable modes of travel we commented Focus housing growth in locations which either are already (the Plumpton-Glynde plus Seaford branch corridors), or could be, served by rail stations. A new 'garden community' (current official parlance) between Lewes and Uckfield could provide the basis for a new rail link (the former or a new route) with a new station at the heart of a sustainable development of sufficient critical mass to support a comprehensive range of community infrastructure, and relieve housing pressures elsewhere across the District. We also said Land Value Capture (pioneered by E-Rail) is a method of funding a new rail link, leaving conventional developer contributions still available for other options.
See more in our quarterly branch newsletter railse here.

From 23 November 2020 to 18 January 2021 Wealden District Council consulted on Direction of Travel for their next Local Plan; here is Railfuture's response. We drew particular attention to Transport for the South East identifying the Brighton-Tunbridge Wells corridor in their South Central Radial Area Study.

On 28 January 2020 Transport Secretary The Rt Hon Grant Shapps MP launched the Department for Transport's £500million Restoring Your Railway Fund. Updated Guidance on How to apply for funding to support the re-opening of rail lines and stations was issued on 19 February, with initial expressions of interest from local MPs in support from the Ideas Fund due by 28 February and submissions by 16 March 2020. On 8 September 2020 DfT published the complete list of all bids in rounds 1 and 2 of the Ideas Fund. It also published the list of successful bids, but Uckfield-Lewes, in the form of the Wealden Line Campaign's BML2 project, was not among them. On 23 January 2021 the third round of the Ideas Fund was launched, closing Friday 5 March. A full list of bids was first published on 8 September 2020, and an update on 12 May 2021 resulted in the original 85 round 3 bids becoming 89 after some re-naming and initial assessment. The Wealden Line Campaign's bid To re-open the Lewes to Uckfield & Tunbridge Wells to Eridge/Ashurst - Brighton Main Line was re-submitted to round 3, decisions were taken by the DfT's Expert Panel in mid-June 2021, and were due to be announced 'in the summer'. On 27 October 2021 the Chancellor of the Exchequer published his Autumn Budget which announced the 13 winning bids to round 3 of the Ideas Fund, none of which were in the East Midlands, East of England or South East regions. The full list of winning bids from all three rounds was published, together with the full list of all bids received. On 18 June 2022 the DfT published a Restoring Your Railway programme update which re-confirmed in Appendix C the unsuccessful bids to the Ideas Fund, which included the round 1 and 3 bids by the Wealden Line Campaign "To re-open the Lewes to Uckfield & Tunbridge Wells to Eridge/Ashurst - Brighton Main Line."

In July 2019 we launched LUcky Garden Village at the 20th annual Uckfield Festival's Big Day as our proposed approach to accommodating essential housing growth supported by sustainable transport with a new Uckfield-Lewes rail link.
In September 2019 we took the same message to the annual Lewes Societies Fair.

In April 2018 we made a presentation to Lewes District Council's Scrutiny Committee on Lewes-Uckfield reinstatement, putting forward the case that development of a garden village in the area served by the line would both meet the need for new homes to satisfy Brighton's growing employment market, and justify reinstating the railway between Uckfield and Lewes to serve it.

On 2 March 2017 the government published the long-awaited London and South Coast Rail Corridor Study report, dated April 2016. News headlines portrayed this as the death knell of a second main line to London, but in fact the study points the way forward for reopening between Uckfield and Lewes, and a new route between Stratford and East Croydon via Docklands. Whilst the study found that there was not a transport-driven need to reopen Lewes - Uckfield, it recognised that it might be justified on the basis of economic growth. The study recommended that a new approach is required, starting with the local authorities and Local Enterprise Partnerships (LEPs) commissioning a review of potential growth scenarios.

The Transport Secretary also encouraged the promoters of London and Southern Counties Railways, a privately-funded consortium, to develop proposals for a new route linking Stratford, Docklands, and East Croydon with the Sussex Coast. Railfuture supported this initiative which is similar to our Thameslink 2 concept and which may offer an additional route between London and Brighton. Subsequently the Department for Transport gave guidance on the criteria by which such Market Led Proposals will be assessed.

Therefore there are two possible ways forward:
Irrespective of who takes the lead, the local authorities and LEPs are key to the process as they that must agree the economic development and housing plans that will underpin the growth scenarios and so the business case for services on the Tunbridge Wells – Uckfield – Lewes – Brighton axis. Railfuture will continue to work to bring together the promoters and stakeholders to achieve a successful outcome.

Travelling across or around Sussex isn't quick or easy. Roads are congested, bus services are slow and finish early, and rail routes do not all link up.
The Department for Transport published the Network Rail report on the Brighton Main Line, capacity challenges and options for improvements. The DfT agreed with the recommendation that Lewes-Uckfield re-instatement could make a longer term contribution to capacity on the Sussex Route, after the constraints of flat line junctions and fast line platforms between Stoats Nest Junction (south of Purley) and London have been addressed in Control Period 6 (2019-24). Similarly the Network Rail Sussex Area Route Study recommended safeguarding of the Uckfield - Lewes route; the Railfuture response to Sussex Area Route Study consultation argued for the benefits of access from the Weald to Brighton, in addition to Sussex Route capacity and resilience. Reopening is a question of when, not if.

An additional through route between the Sussex coast and London will deliver the following benefits:

Railfuture put its money where its mouth is by engaging independent advisor Jonathan Roberts Consulting to assess the evidence of economic and transport needs in Sussex. Key points are that Brighton is the largest employment centre in the South East outside London, the Weald has a very high daily outflow of people for work, Tunbridge Wells is a key destination, and Hastings has a high level of unemployment. His recommendations to promote economic growth in East Sussex are:
The 80-page report Access and Connections: East Sussex - Opportunities to align railway investment to the economic growth requirements of East Sussex by JRC (view or download) was a significant input to the East Sussex Rail Strategy and Action Plan, the WSP|Parsons Brinckerhoff London and South Coast Rail Corridor Study report, and the London & Southern Counties Railways initiative. See the JRC presentation in July 2013.

Successful rail reopenings have been promoted by a partnership of key stakeholders, including local authorities, local enterprise partnerships, and the rail industry. This is essential to long term success and allows access to new local sources of transport funding. We are working to build a consensus amongst potential promoters and stakeholders that reopening Tunbridge Wells West-Uckfield-Lewes-Brighton is justified, credible and deliverable, and so inspire them to support and actively promote this realistic, evidence-based approach and ensure that a viable scope for re-opening is agreed.

East Sussex County Council has made electrifying and redoubling the Uckfield line and Marshlink its top priorities in the final version of its Rail Strategy and Action Plan.

Whilst the London and South Coast Rail Corridor Study study focused on the transport investment case, a complementary economic (jobs and housing) investment case must be developed by the local authorities and Local Enterprise Partnerships.

If you support the Railfuture campaign, wish to keep up-to-date with our activities, and find out more about how YOU can play your part, please join us at Sussex and Coastway, and: