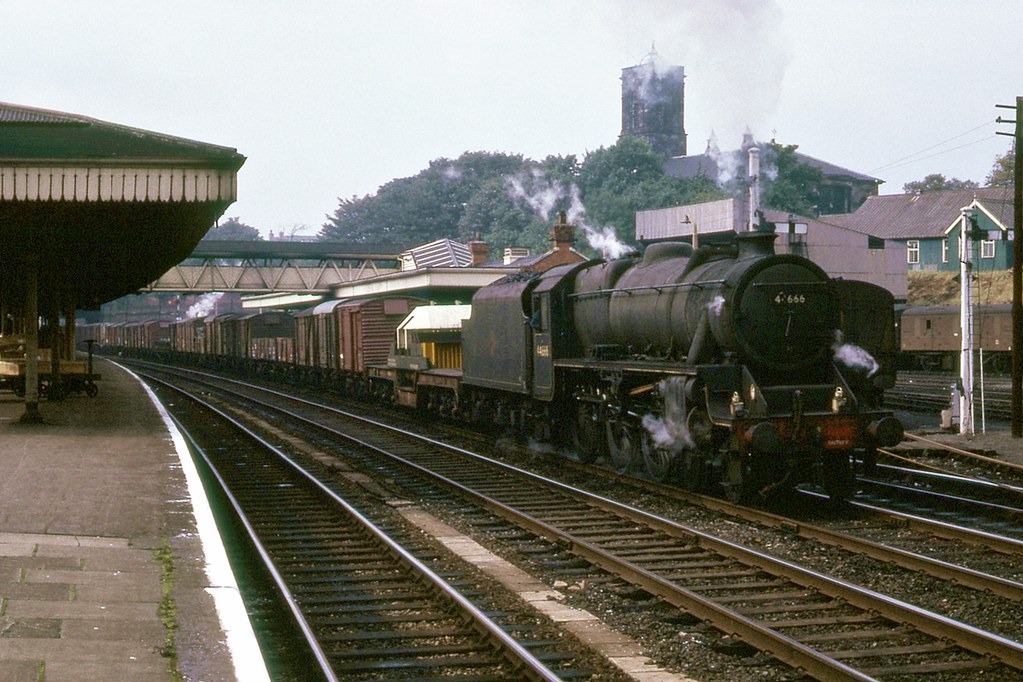 The UK government has announced eight new nuclear power stations for Britain, triggering reaction from many environmentalists. But what about a strategy for reducing demand? Railfuture policy director Ian Brown sets out the opportunity for rail. Nuclear fuel and nuclear waste has been travelling safely on our railways for a long time. Image by Reddit.

Many environmental summits have come and gone, including the dismal COP26 summit in Glasgow. Each time new targets, all conveniently far enough away for now are set. Each day we see the climate emergency increase. This has been a major worldwide case of the "Prisoner’s Dilemma" where everybody is starting to acknowledge the need for action, but action is subordinated to immediate self-interest. The prisoners do not escape.

Resilience of the supply chain has been a key issue for manufacturing and retail, but we seem to have ignored resilience of energy in the form of oil and gas. Witnessing frequent and no doubt ongoing wars in the Middle East, the EU turned to Russia which now supplies 40% of its oil and 27% of its gas, so setting up Russia as a dominant supplier. This explains why the EU, particularly Germany, has been hesitant in turning off the tap, despite the flow financing Putin’s war against the west. Britain is better in this respect with only 4% of our gas and 8% of oil coming from Russia. Petrol prices are 24% up in the last year here against the previous year so it is price that will reduce demand here, despite the perverse cut in fuel duty. Actually UK peak oil and gas consumption peaked in 1999 and has declined in the last 20 years by 58% or about 5.1% per year. This is a good record if viewed in isolation of other environmental and supply resilience issues. However supply resilience changes all that. Not to see this coming is as strategically inept as not recognising climate change. There is no evidence that we are learning about reliance on dominant suppliers. Look at Facebook, Twitter, Microsoft, Apple.


WE SPEND 40% OF OUR ENERGY ON TRANSPORT

Transport is an enabler not primary production but represents the greatest consumption of fuels - way out of proportion to its utility. The fundamental opportunity here is that rail, with an overall 10% market share has the most potential to address the issue of long term fuel supply demand and resilience. This is the background to Railfuture's position in campaigning for a 100% increase in passengers and freight on our railways. A 100% increase can be accommodated with the existing rail system with the right financial incentives to customers and some quite significant schemes to address congestion points. This also requires HS2 to facilitate capacity on the West Coast Main Line by including the Golborne HS2 Spur line near Wigan (an area where sleazy political self-interest seems to dominate the media at the moment). It also requires delivery of the Integrated Rail Plan including upgrades to the Trans Pennine routes, the Midland Main Line and the East Coast Main Line. Dirty and now ageing 2 stroke diesel locomotives have played a major, and indeed transformational, part in the transition from our freight network being dominated by and subsidised by coal traffic to power stations towards a vibrant open access rail freight industry, that with the right incentives can achieve the objective of doubling freight on rail and removing it from the roads. The key to delivery is a high capacity electrified network.

We need to change to an electrified network and replace diesel operation with bi-modes. The definition of bi-modes also needs to change to electric/battery, not electric/diesel electric. Technology is moving fast to make this viable for rail passenger and freight operation.
Although investment in rail represents a major contribution to reducing oil and gas demand, it is not enough in itself, despite the huge strides made with renewables to allow us to wean ourselves off oil and gas. Just over half our electricity comes from oil and gas generation. We clearly need comprehensive strategy to reduce this – aimed at quickly reducing demand for energy, particularly by our wasteful transport sector, make the transition to electric traction (all modes) and supplement renewable generation, including biogas.

The government has done these calculations too and has just announced its new strategy based on building eight new nuclear power stations. Ironic in view of the 'dash for gas' in the 1990s. It is not a consumption reduction strategy but a supply strategy, an issue that has caused much criticism from some environmentalists. Railfuture’s position is that we need both of these hence the comments on electrification and modal shift.

Generally the issues with nuclear are cost (may be different with volume production and technology changes), security and environmental issues with storage and disposal of nuclear waste. Nuclear production itself is pollution free, potentially high capacity and well suited to electric rail operation as we have seen for years in France. Electricity has to be consumed immediately or stored. Storage can be achieved using capacitors (short term), batteries, as chemical energy by electrolysing to produce hydrogen which can then be used as fuel, or as potential energy such as using surplus electricity to pump water into a reservoir at Dinorwig in Wales during off peak demand then releasing it into hydro electric turbines when power is needed.

For our railways this essentially means mainstream electrification and batteries together with regenerative braking and use of capacitors in some high volume circumstances. Our railways, with modal shift are best placed to take advantage of the nuclear power generation decision. Battery technology has also advanced significantly in recent years. For a DMU for example a battery bank cost about the same as a similar sized under floor diesel engine. The problem remains that diesel engines last about three times longer than batteries (but require more maintenance) so there remains a cost issue, there are also serious environmental and indeed supply issues with lithium and cobalt, suggesting that batteries can be a significant part of the transport solution but not the total solution, particularly for rail transport. The evidence for saying this is that we are seeing experiments with electrification of motorways for freight vehicles (which need two supply wires like trolleybuses).

In summary we need the two complementary energy strategies, transport consumption reduction and supplementary sources of power generation. BOTH OF THESE STRATEGIES SUPPORT RAILWAY ELECTRIFICATION IN THE UK.

The position with existing nuclear power plants in Britain

It is also worth examining the potential effect on our rail network of the government announcement on building eight new nuclear power stations.

There are currently 6 nuclear generating stations across England and Scotland operated by EDF Energy. The situation on these is:
Two other AGR stations, Dungeness B and Hunterston B in Scotland recently ended generation, so has Sellafield some time ago, moving to reprocessing nuclear waste and now decommissioning.

Unlike most industry closures where the owners just walk away, this is not possible with nuclear. The first nuclear power station, Calder Hall, which commenced the decommissioning process in 2005, is the most quantified example of what this means. Defuelling and removal of most buildings at Calder Hall is expected to take until 2032, followed by a care and maintenance phase from 2033 to 2104. Demolition of reactor buildings and final site clearance will then take until 2114 – over 100 years in total. There are 10 other Magnox power stations being decommissioned. Calder Hall is part of the Sellafield site which currently employs 10,000 people, primarily on decommissioning all the historic UK nuclear power stations, and reprocessing of spent fuel from UK and international nuclear reactors. It is the biggest employer in West Cumbria - a good economy is directly correlated to rail journeys. Additionally nuclear waste needs secure storage requiring secure rail access.

In summary the AGR decommissioning programme will be big business for our railways for a long time to come.

The new plan envisages 95% of the UK’s electrical energy coming from low carbon (ie including nuclear) by 2030. Up to 8 new nuclear reactors could be approved on existing sites as part of the UK’s new energy strategy.

The fact that existing sites are to be used is essential to facilitate planning approval but it is also significant in that previous generating has resulted in the provision of rail connections. The map from the BBC shows where this might be. The announcement does not say as yet which will be chosen but is likely to major on the current sites and those most recently decommissioned. 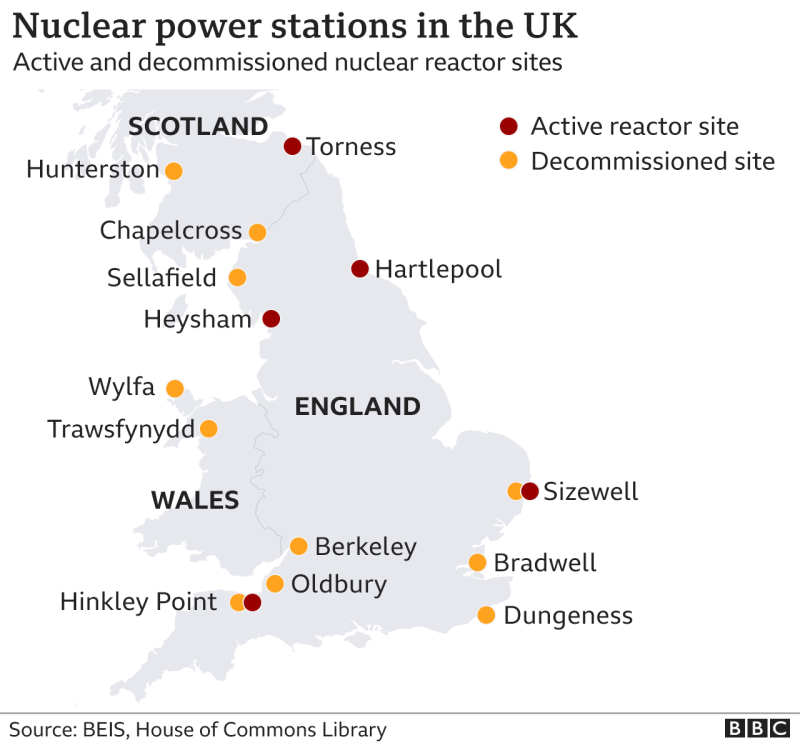 The effect on our rail network is also significant but different from the ongoing decommissioning process – requiring continued provision of a single unified rail network for the country and securing the future of many rail connections for the future. Construction requires huge amounts of construction materials, particularly cement and steel, with supply lines similar in magnitude to that required for HS2 for the next 8-10 years. The effect on jobs is also significant in the chosen areas.

Once commissioned, secure rail transport is needed for the transport of raw materials, reprocessing and movement of spent fuel. The last 50 years has demonstrated how safe and effective rail transport is with such movements. Coal was the mainstay of rail freight economics, oil was not owing to investment in pipelines. Nuclear is potentially similar to coal in economic terms for our railways. It is, however, radically different at each of the three stages, construction (10 Years), operation (C30 Years) and decommissioning (c100 Years). Coal was local flows from pits to power stations (until imported coal became dominant). Nuclear transport requires a complete rail network-no fragmentation including access to these remote sites many of which can provide security for local communities and jobs and rail access.

It is clear that GBR will be required to provide a national rail system to facilitate this development. Railfuture will continue to engage in informed dialogue with stakeholders to ensure rail can achieve a sustainable electrified network with battery charging islands, that can accommodate significant modal shift from road to rail.