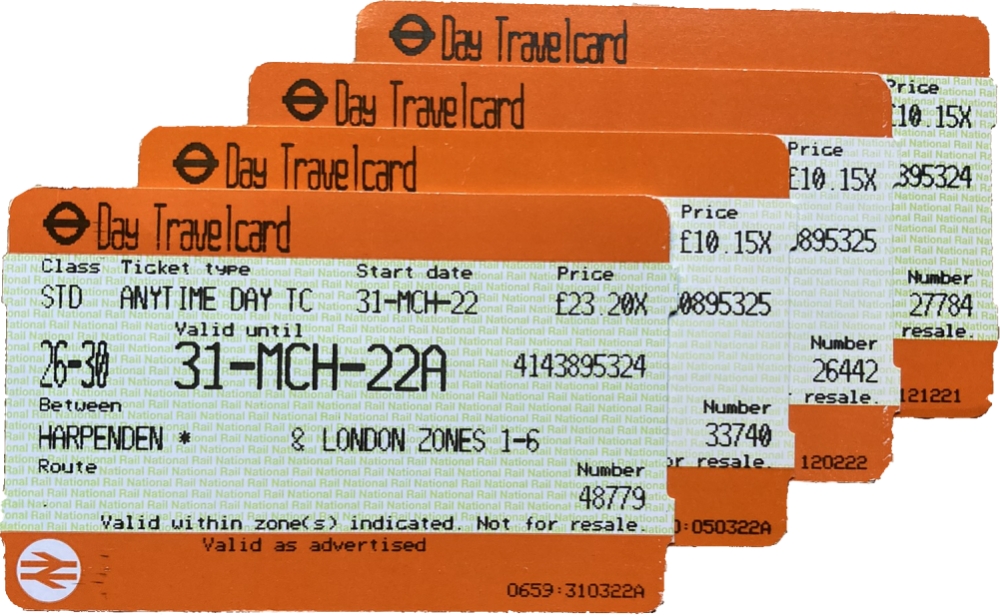 Neil Middleton, a Railfuture Director, takes a look at the London Travelcard Add-on, which is currently threatened by TfL's need to raise more fare income. He is unconvinced that abolition will lead to the expected revenue increase. Rather, he thinks it is frequently about convenience and certainty – abolition will mean some passengers will lose convenience and trust - and thus not travel – and the research others do will mean they realise they can now pay less. Thus, Railfuture believes that the Travelcard add-on should be retained – and improved. We have a survey to be completed to understand usage better - please complete it. Pic: Neil Middleton

As part of the latest TfL Settlement with Central Government to provide additional funding, TfL had included withdrawing from the Travelcard agreement during 2023 as part of its efforts to balance its books (the relevant text is shown as a screen shot in the Notes below). This will affect both Travelcards within London (which are typically not value for money) and Travelcard Add-ons to National Rail fares from stations outside Greater London. This article concentrates on the National Rail Travelcard Add-on, but the non-cost elements mentioned below apply equally to a London only Travelcard.

Railfuture is unconvinced that abolition of the London Travelcard Add-on from National Rail stations will lead to the expected revenue increase. Rather, the Travelcard Add-on is frequently about convenience and certainty – abolition will mean some passengers will lose convenience and trust - and thus not travel – and the research others do will mean they realise they can now pay less. Thus, we believe that the Travelcard add-on should be retained – and improved.

We agree that for a portion of stations the cost of the Travelcard add-on is too low (for some or all ticket types) and believe that, instead, there could be a smaller range of add-on costs for Peak and Off-Peak Travelcards, similar to, but slightly less than, the in-London PAYG Cap to represent the time spent on National Rail services (and thus not on TfL services).

Note: We’ve prepared this article now, in advance of the formal public consultation, as it gives us additional time to formulate our thoughts on the matter.

Railfuture believes that in practice the National Rail Travelcard Add-on fare is primarily about convenience for most travellers – by paying in advance, a set supplementary fare is paid, and thus costs are known. The product has been in place for many decades and is now a highly trusted product, in good part because of its simplicity “For £X I can go to London and back and travel on the tube, buses, trains etc at no additional cost”.

We further believe that this loss of convenience and certainty will discourage a portion of travellers from traveling at all, thus both reducing revenue (to National Rail and TfL) and with knock on effects to London’s economy such as loss of theatre and restaurant bookings with consequential adverse economic impacts. At a time when train services are often being cut back, bringing in a more complex substitute product (PAYG), even if it is theoretically better, is, we believe, the wrong thing to do. Removal may have other unwanted impacts include more car travel as intending travellers are daunted by a more complex product choice (and price increases). It is generally not in everyone’s interest for visitors to London to travel to the edge of London by car and only then switch to public transport - that is a modal shift change we do not want (that also makes all the green targets we have harder to achieve).

The general comment is often that the Travelcard is too much of a bargain; we think that for most Travelcard users this isn’t true and for most it is a broadly cost neutral purchase where the benefits are achieving certainty, the comfort of using an understood and trusted product and locking in costs at the start of the trip; we recognise, however, that for some it is a bargain; however even for these, in some cases we urge caution.

In looking at the future of the Travelcard add-on, we believe there are three broad themes to be considered; these are set out below together with some detailing / exampling:

This aspect needs to be considered thematically – fairness & equality and separately as the commercial aspect of revenue loss.

We are concerned that the planned Equalities assessment will focus on aspects such as physical disability. We believe this to be inappropriate; the assessment needs to also look at wider aspects including by age (both older and younger), by financial state (eg having a bank account – with sufficient funds) and by neural diversity. Whilst not an equalities matter for others, the same factors are also likely to act as a disincentive to intending travellers due to their uncertainty of how to pay for travel, how much that travel might cost and the hassle of organising themselves to pay the lowest cost. Consider a family outing:
As mentioned above, for some this additional complexity is an Equalities issue – for others, it is just a strong disincentive to travel to London. For regular travellers, much of the above delivers value across multiple trips and can be justified, but for the occasional user it becomes a very noticeable disincentive.

Broadly price neutral – the business case to remove that isn’t 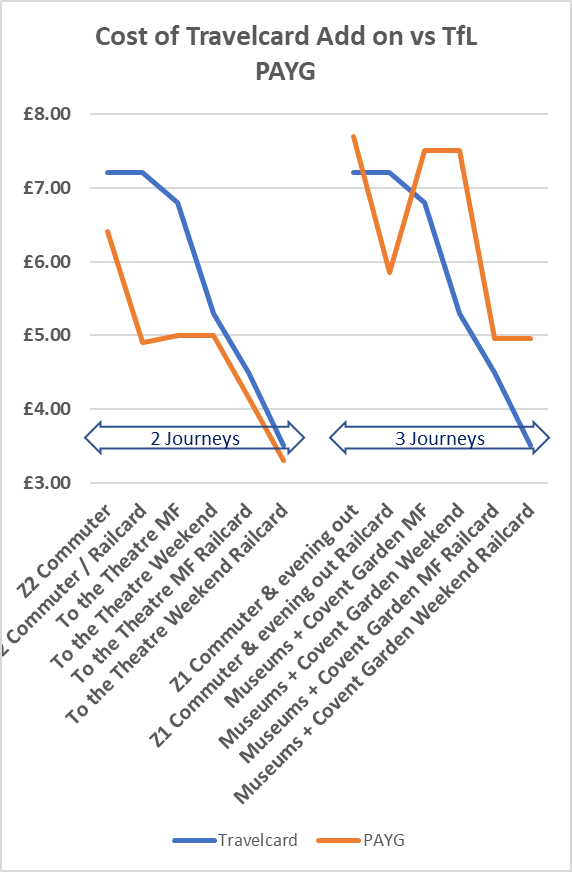 Our pricing research suggests that for many common scenarios, purchase of the Travelcard Add-in is about convenience and trust, with pricing differences being small. Scenarios that we have found that this applies for include:
Given this broad price neutrality, we believe revenue loss from people choosing not to travel as a simple product has disappeared to be replaced by a more complex ones will outweigh any revenue gain, particularly as this has to grow sufficiently to overcome over purchased travel.

A bargain – by product feature 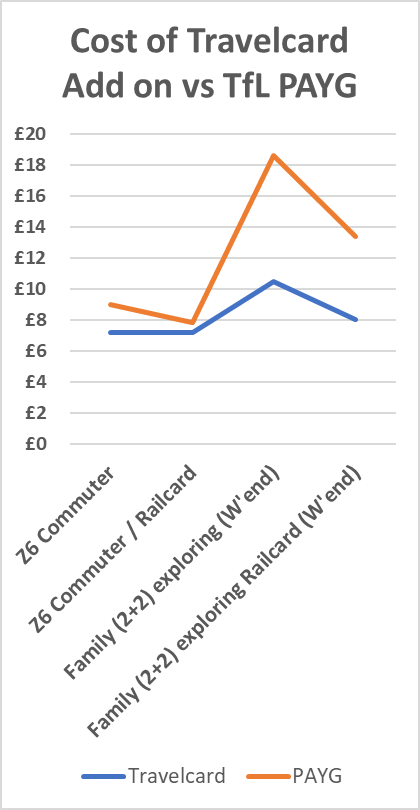 Railfuture recognises that the pricing of the Travelcard Add-at a broadly similar rate to the U1/U2 Adult Capped Fare does mean that it can be a “bargain”:

A bargain – from specific stations

Our analysis of the price of the Travelcard Add-on for stations on the Midland Mainline between Radlett (first station outside Z1-Z6) and Leicester shows a cost spread for the add-on: 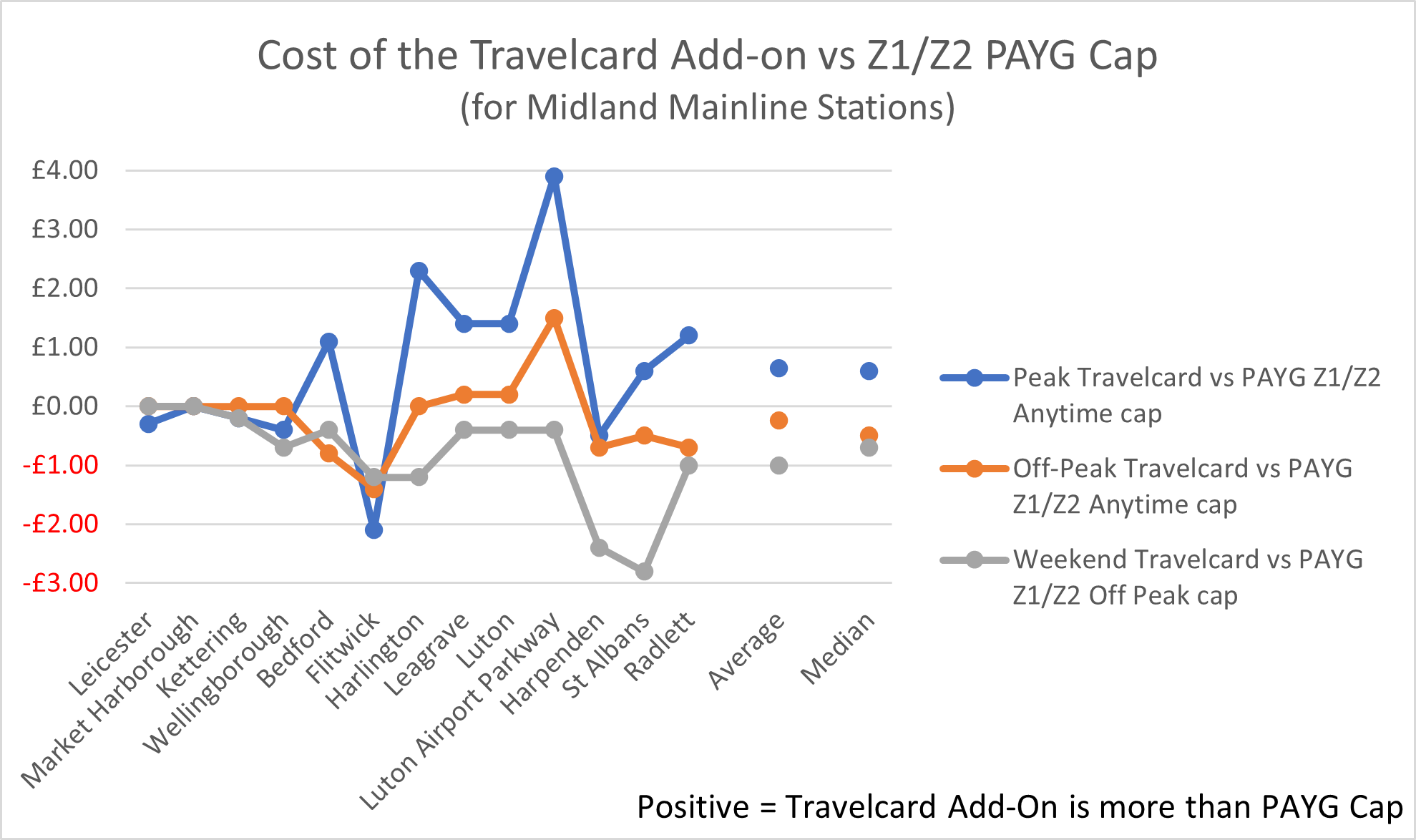 With the Travelcard Add-on ranging from £3.90 more to £2.80 less. It should be noted that even at £2.80 less, this is equivalent to a 10p saving for someone who just travels to their destination and back.

We accept that there is a case for adjusting ‘edge’ cases – but this should be a both ways adjustment with high cost add-ons being reduced in price as well as lower price ones being increased.

Yes, it is. But in this context, it cannot be as simple as a single ticket that provides unlimited travel on public transport in TfL Zones 1 to 6 for the day (or duration of a season ticket). A typical Londoner is a very regular user of PAYG and therefore gets to understand it very well. The same applies to many outside London (including the author of this paper). These travellers are comfortable using PAYG and the overhead to them of understanding the product, setting up an account, the need if a National Railcard holder to get an Oyster card and get the card loaded to it et al are all acceptable.

However, for many others this isn’t true. So they’ll chose the option “let’s go elsewhere”, depriving TfL and, possibly National Rail, of fare revenue.

Some practical next steps

Railfuture has created a survey for Travelcard users to complete to help understand typical usage in more detail. We ask you to complete it here.