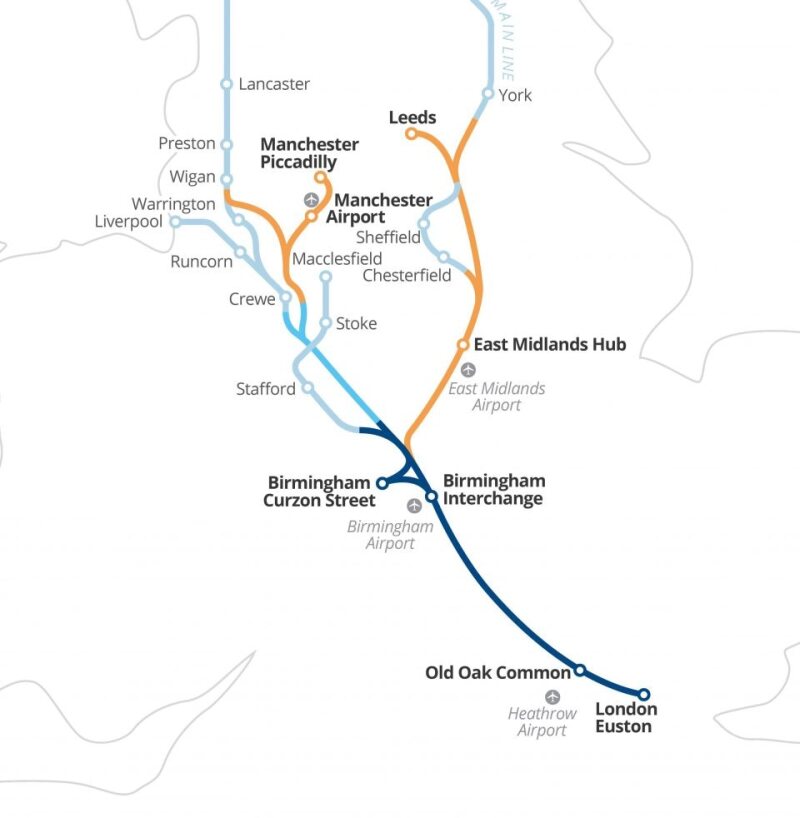 Our HS2 update part 1 noted that the project has been subject to a series of reviews and despite this, elements of the project remain under review with a government announcement expected in the next few months on what is officially titled Phase 2b. Phase 1 and 2a were reviewed in some detail in the Part 1 article. 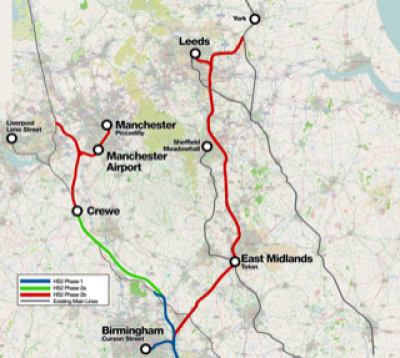 The National Infrastructure Commission's Rail Needs Assessment for the Midlands and the North identified connectivity between regional cities as higher priority than connectivity with London.

Therefore part 2 of Railfuture’s HS2 Review concerns Phase 2b. Curiously Phase 2b includes the Western leg of HS2 north of Crewe to Manchester in addition to the Eastern leg which is the main focus of this review. 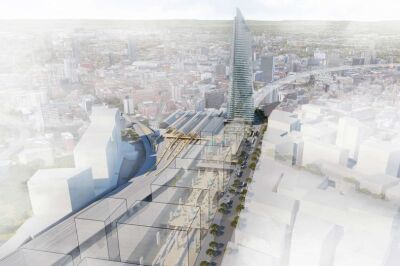 Artists impression of a through station for HS2 and NPR at Manchester Piccadilly. Image Weston Williamson.

Phase 1 and 2a is authorised and the Western leg of Phase 2b highly likely to go ahead following review of whether better designs are feasible at Manchester Piccadilly, currently envisaged as a terminal station adjunct to Piccadilly station (similar to what Mayfield station was).

The North East leg of HS2 (Phase 2b East)

As Phase 1 and 2a are authorised and now well under construction, the eastern leg of Phase 2b can be viewed as incremental. Railfuture contends that obtaining the benefits of the full scheme should be the strategic objective and so supports the completion of the HS2 project, with better linkages. We are all aware however of the uniquely British trait of changing or curtailing major projects at the last minute, so maximising abortive costs and minimising benefits.

We are aware that the government is reviewing this section specifically, particularly as the Eastern leg is less satisfactory in several ways than the alignment of the western leg. Running north east from Birmingham Interchange, how was it possible to miss the cities of Leicester, Nottingham, Sheffield and terminate in a separate station in Leeds, with through trains beyond Leeds also missing Leeds? This suggests that this element of the project was engineering led, rather than strategically led to maximise city and regional benefits. It is not surprising that this leg of the project has its critics.

The last main line built in the UK (before HS1), was the Great Central Railway. It ran straight through the centre of Leicester, Nottingham and Sheffield. Nottingham Victoria, left (photo Railway Magazine) and right (during demolition in 1967).

Railfuture, through its branches, has joined in the chorus where regional stakeholders have succeeded in persuading HS2 Ltd to ensure the Leeds terminal station is as near as possible, and connected to the existing Leeds station as well as providing a short connecting line from HS2 into the existing network at Leeds. Similarly there is now a connection near Toton so that HS2 trains can serve Sheffield, although Toton remains a poor way of serving either Derby or Nottingham.

Having witnessed such progress on making more sense of HS2 East, Railfuture supports its construction in full, but has to be prepared to ensure benefits of high speed rail accrue to the Midlands and the North East if the government succumbs to post Covid financial pressure to cut back on the scope of this section or abandon it altogether.

The need for contingency plans

In supporting completion of the full HS2 scheme it would be strategically too risky not to consider potential cutbacks by government. We need to be in a position ready to campaign for mitigation designed in some way to provide the benefits of HS2 to the East Midlands and Yorkshire.

The political ramifications of bringing high speed rail to the north west but not the north east do not need augmenting here, other than to maintain that a package of measures on the existing Midland and East Coast main lines would be essential.

Serving Leeds. This would include serving Leeds from Birmingham via Manchester and a direct Northern Powerhouse link to Leeds, potentially with a station increasing the Yorkshire catchment area at Bradford.

An East Coast main capacity package would be required in the form of 4 tracking at Welwyn and Huntingdon to Peterborough sections, and elimination of the Newark flat crossing.

Serving the East Midlands and Sheffield. Full electrification of the Midland Main line north of Kettering to Sheffield via Nottingham and Derby and an Erewash Valley capacity and speed upgrade are essential, as are capacity improvements between Dore and Sheffield to segregate Manchester services.

Toton is a poor location particularly for terminating HS2E. If the project were to terminate in the East Midlands, Railfuture’s position is that this should take the form of a connection to the Midland Main Line near East Midlands Parkway, serving the station itself as a hub including East Midlands Airport, (ie akin to the development at Manchester Airport), so as to prove direct HS2 services from London and Birmingham to Nottingham (City Centre).

Sheffield would be served by continuing HS2E northwards to Toton (ie over Trent Junction) and joining the Erewash Valley upgraded line there, without a station at Toton. All HS2E services would serve East Midlands Parkway and Nottingham or Sheffield.

This option would require further electrification between Sheffield and Doncaster (for ECML) and Wakefield (for Leeds, in both locations accommodating HS2E trains in the existing stations (requires limited upgrades at both locations). 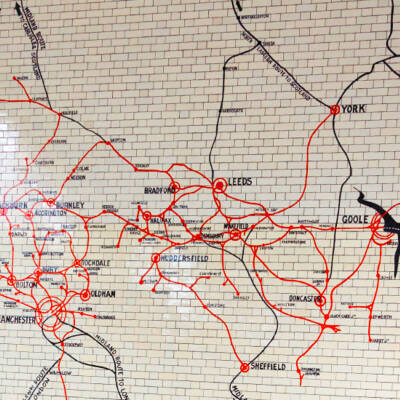 Wakefield station has a huge catchment area south east of Leeds including the ‘Rhubarb Triangle’ and Huddersfield. Wakefield should benefit from HS2. Photo Northern Rail.

The East Midlands branch has considered links very carefully, particularly along the NE to SW axis. This option provides an opportunity for a high speed 2tph Birmingham to Nottingham service (possibly the largest road flow between cities in the region). It also provides an opportunity to accelerate Cross Country services between Birmingham and Sheffield and onwards via Doncaster and Wakefield to Leeds. As proposed in a report by report by Jim Steer, under this and indeed the full HS2E scenario, a link is required in Birmingham from HS2 to link into the Camp Hill line so Cross Country trains from the South West and South Coast can gain access to Curzon Street Station and onto HS2E to Nottingham, Sheffield and north east destinations. Carefully integrating Cross Country services into HS2E greatly improves the potential for HS2E as far as the East Midlands.

As there is no station at Sheffield on the existing HS2E proposed alignment, a further intermediate option does not suggest itself. Sheffield is therefore treated under Option 2. 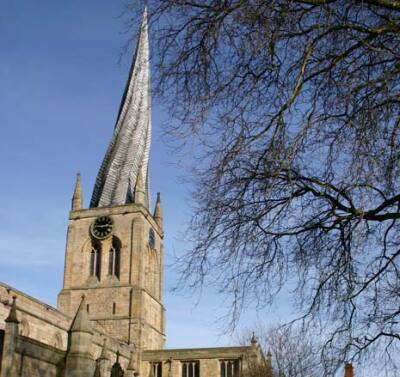 Chesterfield, an important stepping off point for Derbyshire, gets some HS2 services with the full scheme, but gets all HS2E services to Sheffield under Option 2. Photo The Chesterfield Post.

Railfuture members have a range of views on the outcome of the further review of HS2, hence the importance of reviewing options as described in this paper. The East Midlands, despite being situated in the centre of England has suffered historically from poor regional links to the rest of the country. Railfuture sees HS2E, either in full or as summarised as Option 2 here, as an important catalyst to rectify this situation. We do not see HS2E as an isolated project, but as the basis for improvements to the North East to South West route via Birmingham, and also to improve rail links from Nottingham to Birmingham and potentially to Sheffield and Manchester. Railfuture East Midlands has made comprehensive recommendations in response to the National Infrastructure Commission report on better connectivity. This can be viewed here so members can see what we are advocating on HS2E in a wider regional context.

Railfuture will continue to lobby hard at branch level (Yorkshire and East Midlands) for improved integration of HS2E into regional networks in the East Midlands, South and West Yorkshire. We will also, at national level, campaign for a rational solution to emerge from government evaluation of completing the HS2 project, whether to reconfirm HS2E in full or in part. It is extremely clear that if the scheme is cut back, it will be essential to make compensatory improvements to the existing rail network, particularly to the Midland Main line, including electrification to Doncaster and Leeds.

Railfuture will provide members with a further critique on what the government eventually announces.

This will include the significant outstanding campaigning issues, depending on whether the government confirms the full scheme, or more in tune with government tradition, cuts it back, so maximising abortive effort.

We have an increasing voice with stakeholders and we intend to use it given our whole country coverage through our branches and group contacts.


Railfuture East Midlands recommendations in response to the NIC Rail Needs Assessment for the Midlands and the North.