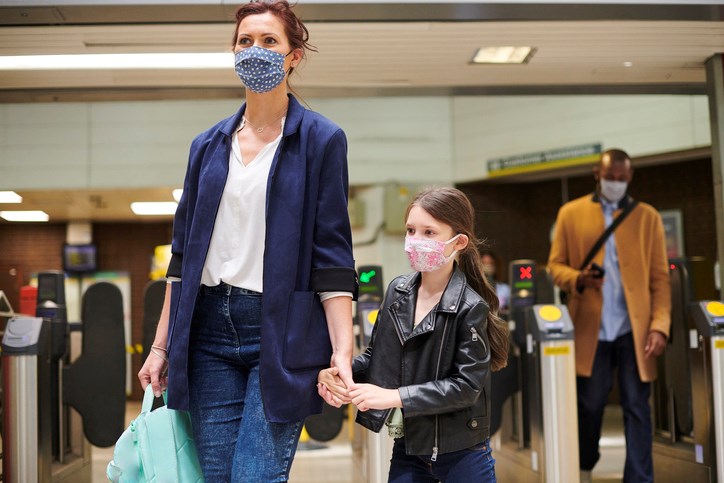 One of our Directors, Ian Brown, took out a camera to see if people were returning to rail for off peak shopping and leisure travel in East London on Wednesday 26 August. This is what he saw. Photo by Getty Images / Rail Delivery Group.

After over three months of being told not to use public transport but use the car, rail demand fell to approx 5% of pre-Covid levels. Some rail operators have been more zealous than others in their efforts to stop people using their trains, as our members are aware.

As we emerge, hopefully sustainably, from lockdown passengers have the opportunity to start to use the trains in a safe manner. Rail operators have put enhanced cleaning in place together with signage on stations designed to assist with social distancing. Passengers are required to wear masks.

Service levels are increasing, again not uniformly but there is quite a substantial increase in rail service capacity from September in the anticipation that a proportion of commuters may return. The issue is our confidence to return to rail after such sustained negative messaging.

In London people are coming back to our trains, particularly to Thameslink, London Overground the DLR , surface Underground and TfL Rail which are seen as safe ways of travelling and crossing London. Suburban rail, such as SouthEastern, Southern and c2c particularly although devoid of commuters are seeing a steady increase particularly in intra-suburban journeys eg Greenwich to Woolwich, given the fact that our roads are now almost back to pre-Covid congestion so affecting the viability of the bus network.

Here are a few pictures which may be of some interest illustrating the pleasant surprise that passengers are returning. We would be very interested to receive similar evidence in our other cities. 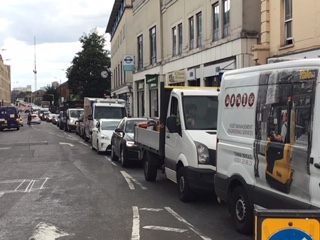 Greenwich, London - Hell on wheels
The traffic is back to pre Covid levels. Surely this cannot be the future? Is this the reason people are trying the trains? 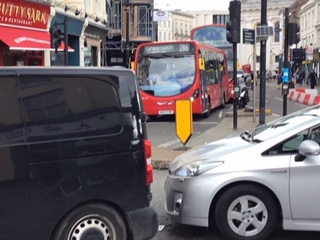 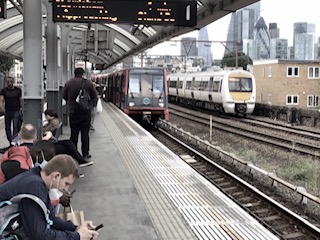 Shadwell
A busy interchange between the Docklands Light Railway and the London Overground. The picture also shows the busy Trenitalia UK c2c route to Southend. c2c has been particularly quick to remove the negative messages and reaped the reward in terms of local business and trips to the seaside at Southend. 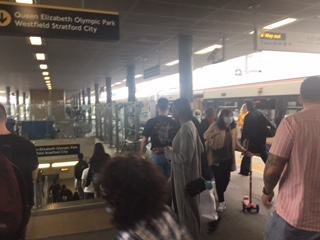 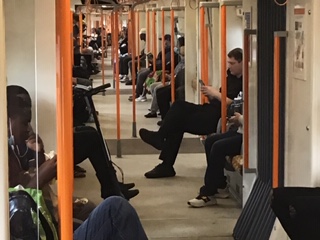 This is an off peak London Overground train leaving Stratford for Richmond.
Off peak, now really quite busy as a safe way of crossing north London. 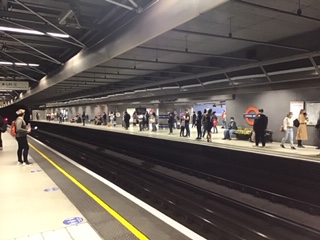 Canada Water.
Another busy interchange with a local shopping and housing catchment area. The picture shows passengers waiting for a Clapham Junction service via South London. Commuters. were not pouring off the Jubilee Line from Canary Wharf but off peak business was encouragingly brisk. 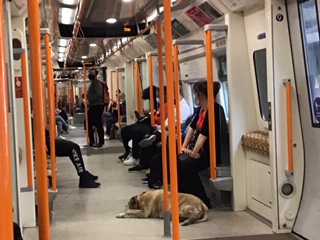 Another Overground train from Crystal Palace leaving Canada Water for Highbury and Islington.
Encouragingly also quite busy but relaxed, as evidenced by the dog clutching his Rover ticket.

Off peak travel particularly involving London’s urban centres is returning. The jury is out regarding how many people will return to office jobs from September. In September the level of services are planned to increase although not uniformly across the country. 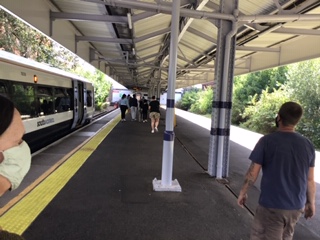 One last picture taken at Bromley North of a Southeastern train arriving.
Again, busy with leisure travellers visiting Bromley in South London. The town centre was busy, shops open and again seeing rail playing it’s part in a retail revival was good to see. In fact Bromley, Stratford and Canada Water seemed busier than an earlier trip to the West End of London. The retailers there have now realised that public transport is key to their business and are now starting to promote it.
We will be very interested to read of Railfuture members' experiences in other cities across Britain including in Wales and Scotland. Put on your mask and see who is travelling! I hope you will be pleasantly surprised as I was.

It is vital that we see passengers returning before the rail subsidy money runs out and this will also require a return of commuters from September, hopefully in sufficient numbers to sustain our towns and cities and the rail service serving them.

We will be collecting as much evidence as possible to ensure national and local government understand the role that rail can play in terms of the country's economy in an environmentally sustainable way. Looking forward to hearing from members and posting their experiences.