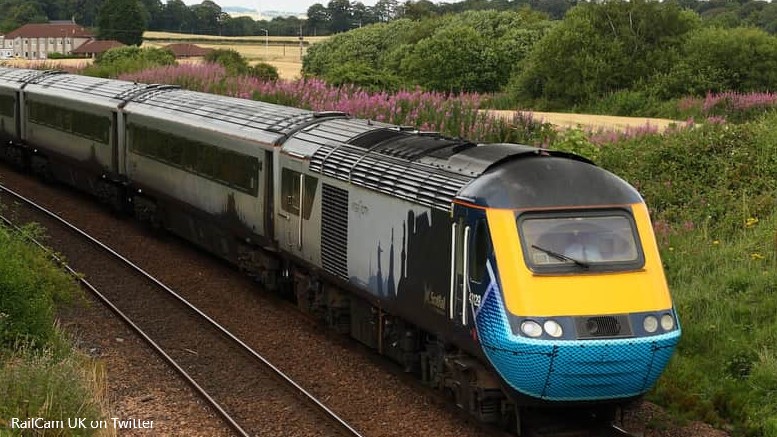 Jane Ann Liston, Secretary, Railfuture Scotland explains why we must attract people back to rail after COVID-19. ScotRail covers train faces to encourage passengers to do the same.

For three months the official message from Government was 'Don't use public transport', one we probably thought we'd never hear. That has now changed, with the announcement by the Prime Minister on 18 July 'that in England, from today, we are making clear that anybody may use public transport'. Unfortunately, the message that 'public transport is not safe' will not easily be erased, with the requirement to cover one's face to prevent infecting others paradoxically perhaps reinforcing the perception that public transport is dirty and should be avoided. There is anecdotal evidence that the sales of second-hand cars are booming, due to the reluctance to use buses and trains, and, despite people appreciating the improvement in air quality due to the lack of transport emissions during the lockdown, the latest Transport Focus survey shows that nearly half of all those questioned are planning to use a car for journeys which previously they would have undertaken by public transport. It would be environmentally disastrous were people returning to work who previously used public transport to opt for cars. For the sake of the environment — remember the Climate Emergency? — the Government must get people back on to public transport. In turn, bus and rail operators need to 'up their game' to attract passengers back.

Rail should emphasise its strong points of speed, comfort and sustainability.

Speed — in most cases, a train will take less time to journey from A to B than any road vehicle obeying the speed limits. Those travelling to a town centre will often find that the train takes them straight there, removing the need to find somewhere to park a car.

Comfort — rail usually gives you a smoother ride than a bus - more people suffer from motion sickness or have trouble reading in the latter. It is certainly true that many currently working at home and communicating via Skype, Zoom or Teams won't go back to the five-day commuting-to-the office pattern, which should facilitate safe spacing, but there is usually more space per passenger in a railway carriage than a bus, which makes safe distancing easier; maybe we'll all get first-class legroom!. Those horror photos of passengers crammed sardine-like into a coach tend to show conditions during commuting hours and on particular busy routes, such as Edinburgh-Glasgow Queen Street, rather than a typical rail journey.

Talking of comfort, crucially, there are toilets on trains; most buses don't have these and for those that do, using them discreetly is not so easy. And there is the matter of refreshments; many trains provide sustenance whereas buses do not, so, as a unique selling point, trains must reinstate some form of catering as soon as possible. One reason is that many journeys involve more than one train. We know that some train operators see no point in providing even teas and coffees on journeys of an hour or so, but many rail journeys consist of more than just one leg. if there are another one or two more trains to be caught to complete the journey, the passenger might be travelling for several hours, not necessarily having time to use station catering facilities, should these even exist, along the way, so the hungry traveller has to be sure they can get something to eat en-route. Guaranteeing connections, particularly important if passengers have to book seats on some or all the stages, is also essential.

Sustainability — it's generally known amongst the cognoscenti that rail is the most environmentally-friendly way to transport many people. Even diesel trains produce less pollution than buses. This also needs to be hammered home - take the train and save the planet.

To these three can be added safety. Rail is the safest form of transport as far as accidents are concerned. As far as personal safety from disease is concerned, with the intensive cleaning regime now in place, the inside of a railway carriage probably has fewer germs than that of the average family car!

Some might say that in the aftermath of the outbreak, we cannot afford enhancements to the rail network. On the contrary; the railway can play a vital part in restarting the economy which it will badly need, for example in conveying freight. And while many activities may continue to be carried out virtually, the likes of a vibrant tourism industry simply cannot; while one can look at beautiful places on a screen, the people in these places gain nothing from voyeur tourism. Therefore, tourism needs people to travel, and we know that the most efficient and environmentally-friendly form of mass transport is rail, avoiding the traffic-jams we have seen on the way to various resorts when travel restrictions were raised, public transport was restricted and its use discouraged. This is an ideal opportunity to start plugging the gaps in the network and link to the railway the places people want to visit.

So rail needs to come out fighting, and proclaim its strengths of speed, comfort and sustainability, reassure passengers of its safety and lobby both central and devolved governments for investment to kick-start the economy; the recovery relies on rail.


On 19 June 2020, Railfuture issued a press release calling on the UK government, aimed at Grant Shapps, the Secretary of State for Transport, to drop the advice for people to avoid using the train.

On 1st July, Railfuture added an article Travel Derailed further highlighting the absurdity of official messages not to travel by train (despite significant measures having been put in place on trains and at stations to make the railway as safe as possible) when aeroplanes are full of passengers and people have been flocking to beaches.

Railfuture's Honorary President, Christian Wolmar, expressed his concern at the implications of discouraging train travel in an article in the New Statesman.

The rail industry needs a champion that is willing to say what is necessary for the future of Britain's railway, even if it contradicts what the government is saying. Railfuture is trying to fill this role. We are run by volunteers and entirely funded by the public — rail users. Will you join us? Click JOIN to find out more.