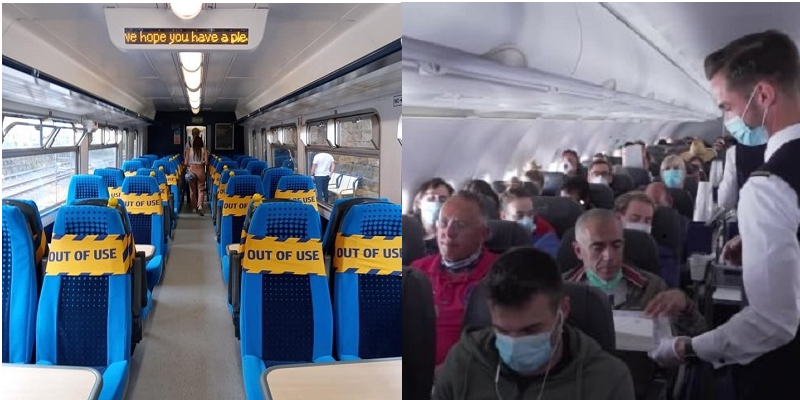 Have our railways suffered another collective nervous breakdown with such strong messages so openly discouraging sustainable travel - by train? Since the DfT is funding all the franchises, has it lost all faith in its own services? The messaging is negative and inconsistent, even contradictory, not conditional encouragement – in sharp contrast to all other modes. Passengers may feel unwelcome or unsafe, and may be unable to travel. The comparison with air travel is stark.

There’s now an urgent need to get the rail system working productively to support economic recovery. Cities in Britain depend on effective public transport to function and people need confidence that rail is safe.

The Department for Transport issued new guidance to transport operators on 29 June 2020. However, it is left to operators to interpret the guidance, which will result in passengers being given inconsistent messages by different operators. Railfuture believes the government should give simple clear guidance to all potential passengers.

In our media release on 19 June 2020, Railfuture proposed a five-point plan to restore confidence in rail. Progress is as follows:

Currently most if not all rail operators are saying ‘essential travel only’, whilst others say ‘only travel when absolutely necessary’ (not just ‘necessary’). So it is OK to drive to the beach at Bournemouth, causing a major incident to be declared on 25 June because ambulances could not get past badly parked cars, but not to go there by train. A tweet from Railfuture resulted in the ‘no unnecessary travel’ banner being removed from the LNER website.

There is no incentive for train operators to encourage travel, because at the moment they are being paid just to operate the trains, and when the emergency measures end franchises will be replaced by concessions.

This is not about protecting the bottom line of the rail companies, although obviously we want the industry to thrive and be economically sustainable. There’s a real risk of damage to the credibility of public transport, which has huge implications for the environment. The long-term effects of climate change have not gone away because of the present crisis. If rail use declines and use of private cars increases as a result of inaction by the rail industry and Government, the long-term consequences will be serious for public health, the environment and the economy. There has to be a balanced approach, and getting the railway back to normal is a key component to economic and environmental health.

Rail has an important part to play in supporting the wider economy, and that in turn helps to pay for the health service. Railways can help to sustain retail in our towns and cities now that the restrictions have been eased there, and support tourism in our national parks and seaside towns. Every human activity has risks, and we recognise that the virus is still out there, but while there are inconsistent standards applied, and widespread flouting of the rules in non-transport environments, the restrictions on rail transport seem disproportionate.

Railfuture branches will press their local train operators for consistent messaging, whilst nationally Railfuture will bang the drum for a coordinated action plan to revive rail transport, culminating in a webinar on ‘Attracting passengers back to rail’ with high level speakers from the rail industry, on 3 October 2020.

Attracting people back to rail after COVID