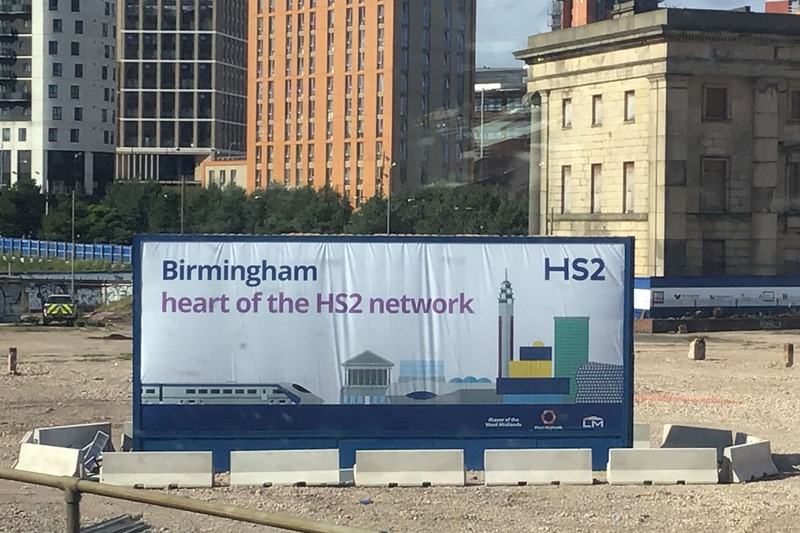 Ian Brown, Railfuture’s Policy Director, explains the purpose of the HS2 Review commissioned by the new government, and Railfuture’s position.

It was January 2009 when HS2 Ltd was set up by government to examine the case for a new line between London and the West Midlands. The decision to proceed came in January 2012, three years later with the planned line opening in 2023. The plans were approved by government in November 2016.

It is only fitting for the government to celebrate the 10th year anniversary of the project by commissioning a review to determine whether HS2 is a good idea and whether it should be cut back or abandoned!

The remit of the review was set by Grant Shapps in August 2019 to provide the department (of Transport) with clear advice on the future of the project. The review is chaired by Doug Oakervee, an early Chair of Crossrail and proponent of Boris Island Airport in the Thames estuary. The deputy chair is Lord Berkeley formerly Chair of the Rail Freight Group.

The terms of reference of the independently led government review are to look at whether and how HS2 should proceed using all existing evidence on the project to consider:


The final report will be sent by the Autumn to the Secretary of State with oversight from the Prime Minister and Chancellor of the Exchequer. The report will inform the government’s decisions on next steps for the project. Limited, largely preparatory work on the project will continue in the interim.

“The Prime Minister has asked me to lead this important review into the HS2 programme. I (am) looking forward to working with my deputy, Lord Berkeley, to advise the government on how and whether to progress with HS2, based on all existing evidence”.

Grant Shapps, the new Secretary of State for Transport, has also published the advice of Allan Cook, the recently appointed chairman of HS2 Limited, that the current scheme cannot be delivered within the current budget or timescale.

Normally, it would be fair game for Railfuture to draw on its branches and members and table an educated guess on the result set against economic, social and environmental benefits for the country.

There are two reasons why predictions based on knowledge of the rail industry and its key players would be unwise at this stage. Firstly the review team itself, as with the Williams review, is not consistently knowledgeable about the rail industry and individual members have strongly preconceived views on what should happen with HS2. Secondly and critically, although the announcement mentions the DfT (who are project sponsors on HS2 of course) it is the Prime Minister and the Treasury who will decide. There is no evidence that they will automatically follow any recommendation.

There are a couple of clues in the remit and ongoing discussions. Not in the remit explicitly is to report on the effectiveness of the HS2 Ltd management team, is it the governance rather than the project itself that needs fixing? Some say this is a major issue, I couldn’t possibly comment! However the remit, despite being extremely brief, mentions linkage with what they now call “Northern Powerhouse Rail” (forget HS3, it’s now NPR). Boris Johnson is extremely keen on this. The remit does not even mention Birmingham or the West Midlands!

Neither the review team nor those receiving the report are “detail” people who will delve into facts although no doubt there are many consultants who can fill in loads of detail – just like with franchise bids and safety cases.

Railfuture has not been silent on HS2, strongly pressing for improvements to the definition of the project, responding formally to various consultations as for example Crewe, despite the successive perceived arrogance of the HS2 leadership with stakeholders. Headway has been achieved.


So what do we want from government following publication of the review? (leaked to be October 18th: October 19th is Brexit is Super Saturday and deal deadline day so we might not all be concentrating on HS2)

HS2 was conceived as a dedicated high speed railway between London and key and not so key (such as Toton) points. It has changed in many ways following consultation to be far more akin to Railfuture’s campaigning position.

Capacity of the rail network


Railfuture sees capacity and resilience as the two significant issues for railways – these are essential to get people out of their cars and on to rail to reduce carbon emissions. HS2 must bring extra capacity to the rail network and so must be integrated far better into it. HS2 from London to near Tamworth, linked into the west coast main line provides a six track West Coast Main Line in effect, if the trains are properly designed to run on the network.


Railfuture agrees that Northern Powerhouse Rail is a key objective but it should not be perceived as a ‘one or the other’ separate project. Intelligent use of HS2 through Manchester and connecting from Liverpool can potentially bring big benefits to the case for NPR. HS2 can facilitate the integration of Manchester Airport and Manchester City Centre into a cross Pennine Northern Powerhouse Rail. It would also facilitate a more viable Birmingham to Leeds HS2 service, routed via Manchester Airport and City centre.

Railfuture contends that these two imperatives suggest that HS2 must be built to Tamworth and to Crewe, linked into the West Coast main line including to Scotland and onto Manchester linked into NPR. There are variations through Manchester (such as a tunnel) that could massively improve the case for NPR.


Railfuture’s third imperative is linkage into regional rail networks and with regional rail services services so providing benefits to whole regions. Birmingham is not quite there despite Curzon Street linkages being taken forward. International is, subject to a project to link HS2 with the NEC and Birmingham Airport.

Crewe could be good. Manchester Airport is also a major development area.

Against these three imperatives, Railfuture is less happy with HS2 through the East Midlands, not serving Leicester, Derby or Nottingham. Further north following considerable feedback, HS2 Ltd has relented to pressure to provide a linkage into Sheffield and also, albeit a single line, into the regional rail network at Leeds, as bolt on afterthoughts rather than properly integrated into the HS2 scheme. At least Leeds HS2 station, as in Manchester, will now be adjacent to the existing station.

Railfuture will continue to campaign for HS2 to the North East, using any delay profitably to ensure HS2 serves the East Midlands and Yorkshire better, with direct services into city centres such as Nottingham and also into regional services at Nottingham, Sheffield and Leeds.


Rail travel from and to Scotland has dramatically increased since HS2 was conceived as largely an England only development. The third powerhouse is Glasgow, Edinburgh and the Central belt again seen as a strong integrated economic entity. Railfuture’s position is that Scotland represents a major opportunity for HS2, particularly with the improved situation at Crewe. A growing concern is that HS2 itself might not have the capacity for all potential demands on it. This suggests that an East Coast Main line capacity and quality upgrade needs to be considered as part of a longer term strategy of getting more out of the eastern leg of HS2.

Blueprint to double capacity across the North