The nationwide lack of rolling stock in Britain – especially the non-electrified routes – has led to the absurd situation of brand new Coventry Arena station, which opened in early 2016, not being used just before and after events because of fears of dangerous levels of crowding both on the platforms and on the train.  The Coventry-Nuneaton line, which is served by a single-carriage London Midland train once an hour, will soon have a three-car train thanks to the vision of Vivarail.

It is embarrassing for Railfuture when it promotes train services to the public, encouraging wider and increased use of trains, only to find that passengers regularly have to stand and are occasionally left behind on the platform. Railfuture has challenged train operators to speed up the introduction into service of new trains, but it has not been easy when lead times from manufacturers are long (Abellio Greater Anglia is having to wait until 2020 for new trains from Bombardier because they must complete an order for Crossrail first) and trains are so expensive that orders often have to wait for the start of a new franchise.

Operators need affordable trains that will be available in the near future.

Railfuture has been following the development of the Class 230 ‘D-Train’ by small start-up rail company Vivarail, headed by career railwayman, ex-MD of Chiltern Railway and Railfuture Vice President Adrian Shooter. Rather than spending years developing a new train from scratch, obtaining all of the necessary approvals and then winning a substantial order of trains to justify the research and development costs, Mr Shooter has opted for a completely different business model that focuses entirely on its customers - the train operators on behalf of passengers – and uses assets that are already available to produce a cheaper product that has a shorter time to market. The marketing blurb describes it as “low maintenance, low cost, low carbon.” 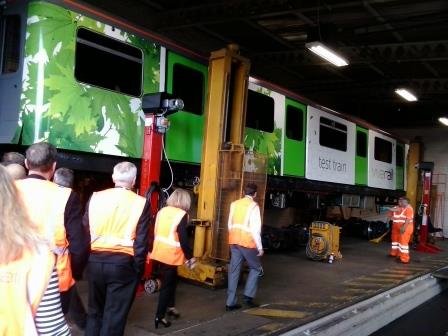 Photo: Invited guests, including Railfuture, take a look under the Vivarail D-Train that has been lifted up by jacks in the depot.

In late September 2016 Railfuture director Jerry Alderson caught up with Adrian Shooter after he gave a presentation about the D-Train to find how far the project had reached and its likely potential in the near future.

Thanks to a decision by Transport for London to retire some of its 30-year-old London Underground ‘D78’ District Line trains well before they were life expired, Vivarail has acquired 228 carriages from them, which will stretch 7 kilometres if lined up end-to-end.  They are being converted to become DEMUs (diesel-electric multiple unit trains) in two-, three- or four-car formation, capable of running almost anywhere on the network (“anywhere a Class 150 can run” according to Mr Shooter).

In early 2015, having waited for London Underground’s decision to sell, Vivarail obtained the first few ex-District Line vehicles at its Long Marston headquarters. The trains, which have an aluminium body, were in exceedingly good condition and had no rust, and the bogies were only ten years old having been replaced half-way through the trains’ intended life. The original intention was to utilise much of the electrical systems but during development of the D-Train it was decided to throw it all away. It was always the intention for the interiors to be completely redesigned, with the train operator choosing from a list of options and additional features. From the moment the D-Train was publicly announced the most interest, and surprise, was the use of 200hp five-cylinder Ford engines to power the trains – unlike any other train.

Safety in a crash

The London Underground is a completely locked-off system in the sense that there are no public interfaces with the track. It has no level crossings, which is a pre-requisite for metro systems and one of the key reasons why many new lines have no on-board driver.

On the mainline railway level crossings present one of the greatest risks. Modern trains are designed to protect the driver and passengers if there is a collision. The District Line trains had legal rights to be used on the railway network, not just the Underground, and therefore did not need to be strengthened but Vivarail chose to do so by inserting a steel structure to go inside the driver’s cab at each end. A 23mph crash test into a vehicle simulating a tanker was done and the results analysed by consultants TRL. Not only was the train proven to be safe in such a collision but the intention to write off a carriage in the exercise failed – it is still perfectly fine!

One of the most painful aspects of introducing a new train is the meeting the latest standards and getting accreditation, which is not helped when the standards are constantly changing. As a result, the original hype that the D-Train could be in service by the end of 2015 could not be met and the completely realistic timescale for the first route, Coventry-Nuneaton, is by the end of 2016 (but definitely not by 12 November when there will be a presentation by Vivarail at Railfuture’s autumn 2016 conference).

Her Majesty’s Railway Inspectorate (HMRI) needs to be satisfied that the trains are safe. However, as the HMRI has insufficient staff Vivarail uses a ‘notified body’ instead.

One of the risks of any new trains is that its mere presence to the signalling system can turn a red light to green, with potentially catastrophic results. The D-Train already fully meets the European accreditation to ensure that it will not do so. Unfortunately, some of Network Rail’s signalling does not meet the European standards and is therefore an unknown quantity. This means yet more testing before the D-Train can run on certain lines. It doesn’t stop there. Network Rail needs to make sure that the trains are ‘within gauge’ so that they do not strike a bridge, signal post or platform edge, for example. As the D-Trains will be delivered to London Midland by rail, not road (and returned by rail for servicing), clearance will be done for the route all the way from Long Marston, and will include a diversionary route as well.

Vivarail expected to receive an interim certificate on 20 September 2016 and 28 days later a certificate making it lawful to carry passengers. Driver training has already started.

London Midland also has to update their safety case for a new type of train. They have to check that the D-Train is not importing any additional risk into their operation.

One of the initial criticisms Vivarail faced is that the D-Train is limited to 60mph, which was its maximum speed on the District Line. People automatically assumed that a lower top-speed than existing trains meant a slower journey. Of course, as any timetable planner would know, the dwell times at stations and the acceleration (and braking) characteristics are critical. London Underground stock was designed for both, and four doors rather than two would minimise dwell times.  Vivarail say that the brakes are much better than the Class 150 and 153 DMUs as well.

To prove that the train would not be slower on a secondary line with regular station stops, Vivarail contracted the TrackSys consultancy to work out the timings for the Bath to Weston-super-Mare route via Bristol Temple Meads and found that it would be substantially faster than the existing trains.

Despite the body-shell being second hand, the passengers will feel like it is a new train because all of the interiors will be new.

A three-car train can carry up to 150 seats per and a further 130 standing. All four doors (on each side) are retained on the (motored) carriages with a driver’s cab but the (unpowered) centre one will have two filled in to create more seating space. 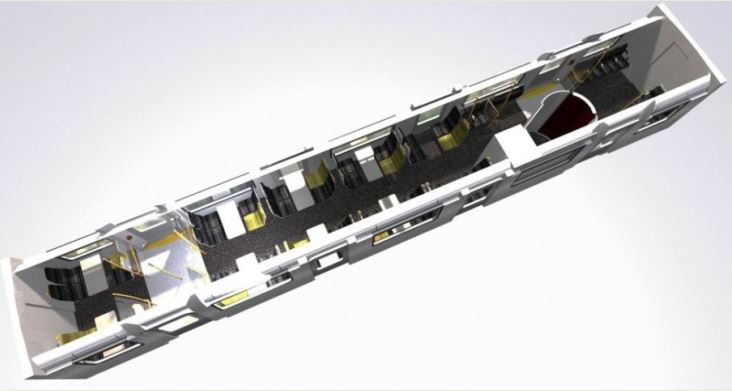 Vivarail can put anything into the trains that the operator wants to pay for, such as toilets, information screens, Wi-Fi and USB sockets. Because of the flexibility in the types of seats that can be ordered, the trains could potentially carry a large number of bicycles.

For the train operators

The three-car units can be run in multiple providing a total of six or nine carriages. However, it would not be possible to walk through the entire trains as there are no corridor connections at the ends of the unit. Vivarail believes that the priority should be to give the driver maximum space and visibility.

The driver’s cab has air conditioning in order to meet the operator’s agreements with the drivers’ union; the carriages will not have air-con as standard but it can be added if the operator wants it.

The entire London Underground uses driver-only operation (DOO). The D-train will support this, but it can also be configured for doors to be operated by a guard if necessary.

The aim is that the trains can potentially go without servicing for three days, which is the maximum time before refuelling, adding more sand or managing the controlled-emission toilets.

Vivarail originally hoped that their trains would replace the disliked ‘Pacer’ trains in the north of England when the new franchise began in 2016. Indeed the government originally led them to believe this was possible. However, politics came into play and Northerners being given a ‘cast-off’ from London was considered unacceptable.

For a time deployment in East Anglia looked a distinct possibility, not least to overcome a desperate shortage of DMUs that led to services being suspended on two branch lines during the leaf-fall season, and loco-hauled trains have been hired on a regular basis. However, owing to certification delays, Abellio pulled out of the trials on the Marks Tey to Sudbury branch, where the overnight servicing would have been carried out at the East Anglian Railway Museum.

As mentioned above, a single 3-car D-Train will be operating on the Coventry to Nuneaton line from the end of 2016 for a year’s trial.  Only agreeing to a trial initially is common practice. The Parry People Mover operated a year-long trial on Sundays on the Stourbridge Town branch prior to London Midland ordering two brand new PPM vehicles for a permanent seven-day-a-week service on the branch.

Vivarail have confidentially agreements in place with all of their prospects and cannot reveal their identity (or anything that would give it away). However, they claim to have a list of seriously interested operators in Britain and other countries (including one that wants to use batteries to power the wheels). Of course, any supplier would claim that there is great interest, wouldn’t they?

There is absolutely nothing to doubt the future success of the D-Train, and it’s likely that there will be quite a few of them operating in Britain to provide much needed extra seats.

While this article will be little comfort to passengers eager to get seat or have a more frequent service, it at least explains how difficult a train operator’s (and train supplier’s) life can be, and re-using a perfectly good train available at a ‘knock-down’ price is not necessarily the simple job that it may seem.

Please help support Railfuture’s campaign for a Bigger and Better railway. Railfuture is run entirely by volunteers and funded by its many members (click Join).
Other Railfuture articles on the D-Train: Vivarail breakthrough (July 2016), Transformation in action (August 2015), Northern Saviour (December 2014).