Washington has two airports, Ronald Reagan National Airport (for domestic services) and Dulles. The Metro was extended to Reagan airport in 1977. Dulles, however, the International Airport which most International passengers will arrive at was also built without a rail connection and still doesn’t have one, not good for a capital city.

The Metro Silver Line is gradually being extended to the airport and has opened as far as Wiehle-Reston East Transport Interchange (a name instantly forgettable for the visitor) in 2014, with planned opening directly into the airport by 2020! As a result, and unlike Reagan Airport, almost everybody uses an assortment of expensive coach and taxi limousine services.

However as preparation for the metro, a shuttle bus has been introduced from Dulles to the new Metro interchange. It is well signed in the airport terminal, has a convenient ticket sales counter, and level access boarding. It runs at a 15 min frequency and takes about 15 minutes to make the transfer. It was well used although in terms of capacity hardly compares with other airport links.

Despite being marketed as a through service to the city there are no through bookings, just a straight 5 USD flat fare for the transfer.

The transfer interchange at the Metro station is a long walk as the Metro is built along a motorway central reservation alignment and the transfer station is necessarily to one side. Nevertheless it is easy to use with level access for those with luggage or mobility impaired. This clean, cheap and cheerful link, although multi-modal, is well worth trying.

Washington had no historic Metro system, unlike most capital cities. The first new metro line was opened as recently as 1976 at a time when the city was becoming increasingly unviable in terms of transport access causing and other road based business centres such as Tyson’s Corner to spring up. Since then the system has been extended to 6 lines and is still expanding to become the second busiest in the United States with about 700,000 passengers per day using it. Map of the system - System map showing good interchange between lines providing the base of a comprehensive transport network for the city.

The system has been in crisis as a result of poor maintenance resulting in complete days’ system closures for safely checks following a series of accidents last year. This is unfortunate as the system is quite excellent from a passenger viewpoint, and was designed to make the shift from road to rail to re-establish Washington as a viable city. There is much good practice in terms of station and train design. The ambiance is similar to the BART system constructed about the same time for the same purpose in San Francisco ie to be attractive to the car user.

The system is a fast network of elevated routes with good views, transforming into an underground central section under the City itself, with good interchanges.

Given the distances involved, the pricing is distance based with point to point fares. Each station has ticket machines only with prices displayed. Slightly unusually however you cannot buy a ticket to a specific destination as displayerd. Instead there is 1 USD for the card and you insert any amount as cash or card giving access to the system. To leave the system by barriers the ticket price is deducted for the journey made, like Oyster in London. If there is not enough on your card there are top up machines before the exit barriers. Interestingly the ticket machines give cash refunds on any outstanding credit, useful when you leave the city, unlike for example in New York where the Metrocard comes in fixed values and no refunds.

This system is extremely user friendly for the visitor and probably represents best practice for smart ticketing on a point to point fares system. 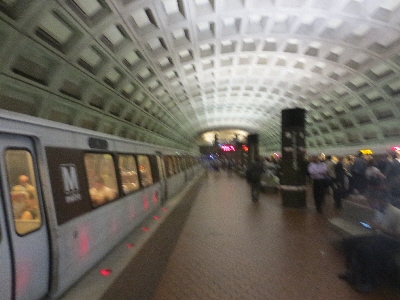 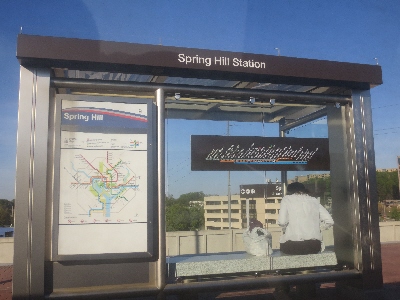 All stations are staffed at a central overlook point near to ticket barriers. The staff showed willingness to come out and assist with ticket machines and enquiries. There is level access everywhere, This is a thoroughly pleasant system to use.

The underground stations in the City centre are to a consistent design with subdued lighting to enhance ambiance. This is not to everybody’s taste, referred to as dingy by some people, particularly those with concerns about personal security. Platform edges are marked by red lights which flash when a train approaches showing exactly where the train will stop. 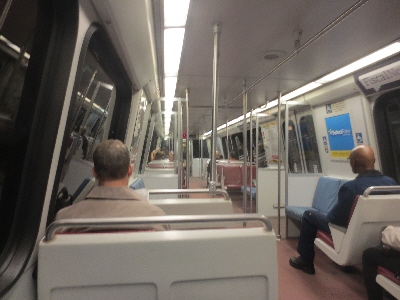 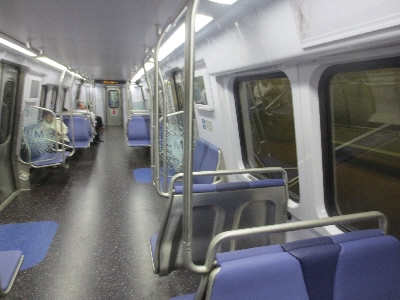 Interestingly, despite five different train builders over the years, the interior design has been retained with air conditioning, level access, big windows and until recently with the latest batch of Kawasaki - carpets. The older cars have minimal passenger information making it difficult to know where you are at the dark subsurface stations. The new Kawasaki cars have two information screens, one showing progress along the route, the other showing the next station with comprehensive interchange and station information, probably best practice worldwide. These trains are a delight to travel on.

Washington is a very small state, geographically surrounded by Maryland to the north and Virginia to the south. Both these states operate essentially commuter services into the city.
Virginia Rail Express (VRE) operate commuter trains on two routes into Washington from the south, interchanging with the Metrorail at L’Enfant Plaza and Union. This is primarily for commuters using large, up to 8 car bilevel trains hauled by diesel locomotives. Ticketing is conventional but most riders are commuters with season tickets as there is little off peak and no weekend service and a very sparse contra peak service. The suburban stations are attractive mostly with large car parks. 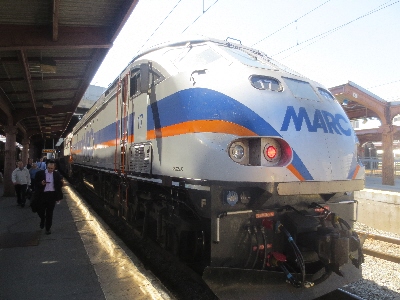 Two of MARC’s route run to Baltimore so MARC is developing off peak service as well as 2 way peak service. This is a cheap and pleasant way of getting to Baltimore c£6 about half the price of Amtrak’s Regional service.

Bilevels were rejected for Crossrail on account of slow boarding but the design used in the North East US which is also gauge constrained, but less so than in the UK is based on level access at the ends of the cars with room for bikes, prams and wheelchairs permitting extremely fast boarding from high level platforms.

Off peak trains use short formational 3 car single level sets of old but comfortable equipment. Many stations have high level access platforms but this was rather marred by leaving from a low level platform at Washington Union station! 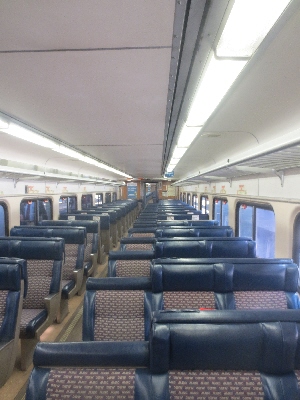 Amtrak is based in Washington and operates long distance daily routes from New York via Washington to Miami (two trains per day, the full traditional Silver Meteor and the recently downgraded Silver Star, also the Crescent to New Orleans and the Vermonter northwards. These use single level Amfleet vehicles There is also a daily service to Chicago, the only service (other than Autotrain) that uses the Amtrak large high gauge full bilevel Superliner cars as used in the west with their good views/seat alignment for passengers.

Although the long distance is sparse and a shadow of its former self in terms of routes served and service the regional service is actually at its highest level ever in terms of frequency along the North East corridor to Philadelphia, New York and Boston. These operate up to generally 125 mph (one stretch of 150mph for Acela trains) which is a surprise to many travellers.

The premium service is generally hourly from Washington to New York and Boston using the 6 car high speed “Acela” sets similar to TGVs, but far too short for the growing traffic on offer. These are extremely comfortable and fast with both first class (includes far better meals than Virgin Trains here) and business class service (large buffet cars, too large given the short formations) and no coach or standard class. This is the only rail service in the United states where rail has a higher market share than air. The rail/air market share is claimed to be 75%/25% over this route (Washington – New York). So successful has the Acela service been that new larger high speed trains are out to tender. 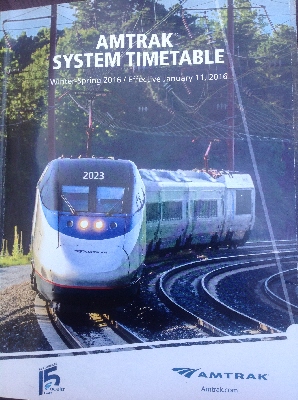 Amtrak's Acela train as pictured on the front of the current all systems timetable. The 2016 spring timetable is the last as the paper version is to be abolished in favour of the internet only version.

There is also a Regional service that operates over a longer north to south network than the Acela service. It operates from Boston, through New York and Philadelphia to and through Washington with extensions to Virginia including historic Lynchburg sponsored by the State of Virginia plus some services onwards further south as far as Savannah. These through services pick up much intermediate traffic.

These have large luggage racks built to take copious luggage- a good point compared with Britain and all seats are forward facing and aligned with windows. These generally have 72 seats (60 for longer distance routes) which is more generous than current UK practice of cramming in as many seats as possible such as in Great Western HSTs. These air conditioned Amfleet cars are looking a little tired and dingy inside but are actually very comfortable for the passenger. All seats have pull down tables with free WiFi, which works!

This is not a comprehensive treatise on Amtrak. From this experience on the Washington to New York route the train is now definitely the preferred option for many Americans, many on business, as well as Railfuture members. As many readers will appreciate, the Amtrak experience in the North East is very different from that in many parts of the US.

Washington, as a tourist destination is a very pleasant city, a totally different experience from New York. It is well worth a visit and as a base for touring, perfectly feasible using public transport using long distance buses to reach places off the rail network.