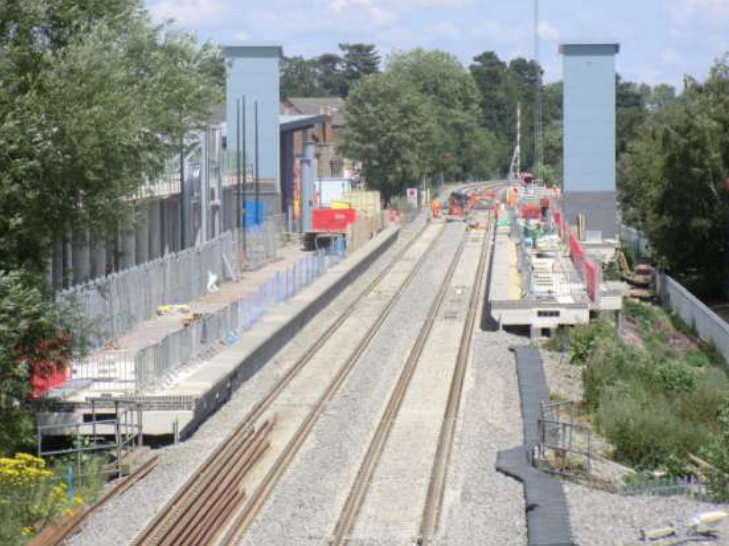 Bicester Village station under construction in July before the footbridge was built Picture by John Elvin
A new rail service will open to the public on Monday 26 October 2015 between Oxford Parkway and London Marylebone after 12 miles of railway was rebuilt and three new stations launched.

A new curve has also been built at Bicester to link Oxford with Chiltern Railways’ existing line to London.

Chiltern Railways says it is the first new rail link between a major British city and London for over 100 years and the journey time is about one hour.

The enterprising train operator will run a preview service on Sunday 25 October with the first train leaving Marylebone station at 07.35, arriving at Oxford Parkway station at 08.49, calling at both Bicester Village (formerly Bicester Town) and Islip. For most of the day trains will run every 30 minutes. The first train from Oxford Parkway will leave at 07.49, arriving in London at 08.51.

Chiltern has formulated its timetable after taking into account the findings of a public consultation in 2014.

For details of the timetable, which starts on Monday 26 October 2015, click here

Signalling was connected in September and on Monday 28 September 2015 driver route training started with one of the first ex-TransPennine trains now modified to become a Chiltern Clubman.

You can download pictures of the rebuilding of the railway John Elvin 600kb.

The service should be the first step in East West Rail, which will include the rebuilding of a disused railway to Bletchley and its extension to Bedford over an existing line, and later to East Anglia. EWR

Already estate agents are speculating how much the new rail service will increase house prices. They believe north Oxford and its nearby villages will become significantly more attractive to commuters.

House prices are already high in Oxford but Summertown in north Oxford remains “affordable” while Jericho has become very trendy. The estate agents say villages near the new rail service are cheap by comparison.