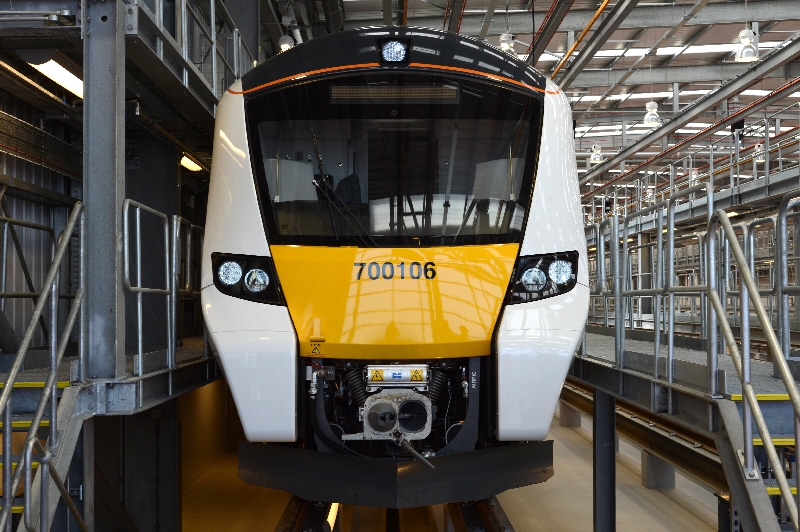 Today Patrick McLoughlin, Secretary of State for Transport, formally opened the new depot at Three Bridges and launched the new Class 700 Thameslink fleet which will be maintained there. Whilst the new journey opportunities that will be created by Thameslink are welcome, the design of the new trains highlights the need for more infrastructure capacity between East Croydon and London Bridge.

By the end of 2018, there will be 115 new Class 700 trains in operation, providing a metro-style service of up to 24 trains per hour running across central London, between Blackfriars and St Pancras. Patrick McLoughlin, Secretary of State for Transport, said: “Our plan for passengers is delivering real improvements for those who use Thameslink services. The opening of this state-of-the-art facility is a major milestone and paves the way for an impressive new fleet of hi-tech trains to come into service from Spring next year. The improvements will transform rail travel for millions of passengers, with better journeys on fantastic new Class 700 trains, improved connections and upgraded stations."

The Siemens press release includes some impressive statistics for the extra carriages and seats that will be provided from 2018 during the peak period on the routes between Bedford, Peterborough, Cambridge and Brighton via St Pancras, Blackfriars and London Bridge, but is unclear on the baseline for this comparison – is it the reduced timetable being operated whilst London Bridge is being rebuilt?

A 12 car class 700 has a claimed capacity of 1754 passengers. However it only has 666 seats, compared to 798 seats on the 12-car class 377 trains currently used between Brighton and Bedford. The reason that the claimed capacity is so high, beside the reduction in the number of seats, is that the standing allowance has been changed; whereas 0.45 sq. metres of floor space is allowed per person standing on existing trains, on the new Thameslink class 700 trains the standing allowance is being reduced to 0.25 sq. metres of floor space per person. To put that in perspective, on a class 700 twenty-seven people will be crammed into the same area as the back of a Mercedes Sprinter LWB van, compared to fifteen people on an existing train.

There is already significant standing during the peak from (for example) Haywards Heath to London, a journey which takes around 50 minutes. By reducing the number of seats on each train in favour of increased standing capacity, the number of passengers who will have to stand will increase, effectively increasing overcrowding (as the standing allowance only applies for journeys of up to 20 minutes, measured to the most crowded point on the train's journey). It will be interesting to see whether these will be the better journeys promised by the Secretary of State, or whether our predictions of complaints from regular commuters, particularly those who travel into London and beyond from places as far afield as Cambridge or Brighton, are borne out.

We told you so!

In 2013 representatives from Railfuture were invited to visit Germany to review the mock-up of the new train. Whilst pleased to have new trains, and liking many features, Railfuture and other passenger groups raised several concerns with the manufacturer and the train operator including the seats being too narrow and too close to both the seat in front and the seat beside it, the thin hard seat cushions, the lack of tables to put your coffee or laptop on and the absence of wifi and power sockets, which are deemed essential by many passengers (even Manchester Metro has wifi). We also recommended that two different versions of the train should be produced, one for the metro services and one for the longer distance services.

The only concession that has been made to our concerns is to increase the gap between adjacent seats by just 2 cm, which still leaves the ironing-board seats so close together that most passengers will be unable to sit without coming into contact with the person in the seat alongside.

Why a metro train?

Therefore the class 700 is uncompromisingly a metro train. Whilst this is what is needed for the Wimbledon loop, it is not suitable for journeys of around an hour between Cambridge, Peterborough, Bedford or the South Coast and London or beyond. In off-peak periods the lack of passenger comfort will compare unfavourably with the alternative of travelling by car, so losing potential revenue.

The reason for this is that the Department for Transport, which defined the specification for the train, was trapped by its own crowding model methodology where metro design is required over the central section. The fallacy is that these are not particularly short core journeys but overlapping long journeys, for example Cambridge to Gatwick and Brighton to St Pancras.

In the short term using this metro design for all Thameslink services may be the only solution which can meet the expected demand growth between East Croydon and London Bridge, because that journey demand is largely satisfied by the longer distance services. Whether that demand should be satisfied to the detriment of longer-distance passenger comfort is open to question. On the other hand the need for wifi is not open to question, since DfT are calling for all franchises to provide it.

What DfT must do now

What is needed is for DfT and Network Rail to provide the necessary infrastructure capacity between East Croydon and London, so that the future demand can be met without downgrading passenger comfort. The enhancements planned by Network Rail for the next control period (CP6, 2019-24) will help, but will not be sufficient – a more radical approach, for example by adopting our Thameslink 2 concept, is also required, as DfT have recognised by commissioning the London-South Coast Rail Corridor Study.  It will then be possible to concentrate the class 700 on inner suburban routes and employ trains like the class 377 on Cambridge/Peterborough/Bedford - Brighton regional Thameslink services.