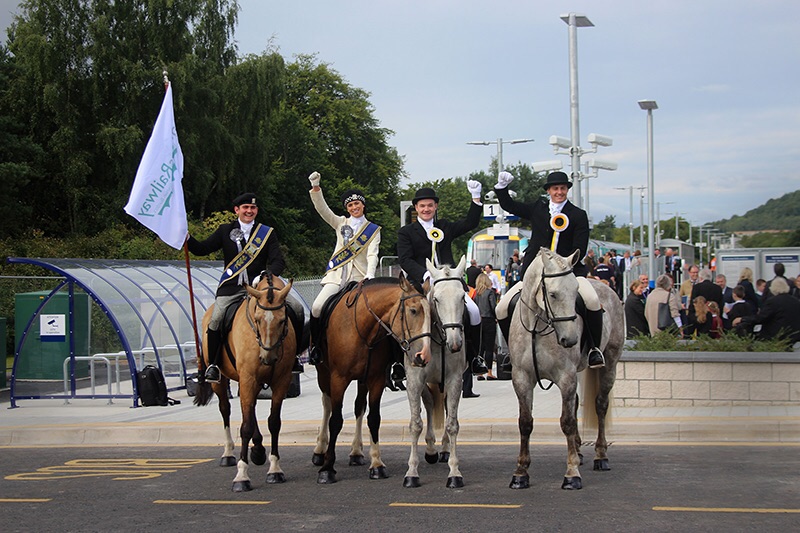 Sir Walter Scott was never far away when the Borders Railway reopened for a special preview run today (4 September 2015), ahead of its public opening on Sunday (6 September 2015).

An actor lookalike, dressed in a tweed jacket and tartan waistcoat, travelled on the train which ran from Edinburgh Waverley station, overlooked by the Scott monument, to Tweedbank, close to Scott's home at Abbotsford.

Regular trains will now run on the Waverley line (named after Scott's famous novel) for the first time in 46 years.

Scott's romantic tales of the "rolling hills and babbling brooks" of the Borders brought English visitors in droves to the land he wrote about and Scott could be seen as the father of Scottish tourism, said Mike Cantlay, the chairman of VisitScotland.

The 2015 train service will allow a new generation of tourists to discover a hidden gem of Scotland, said David Parker of the Scottish Borders Council.

He added: "This is not a politician´s railway. This is a people´s railway. Campaigners have fought long and hard to bring everyone together to make it happen."

The campaigners for the Borders Railway are now hoping it will be so successful that the rest of the line to Hawick and Carlisle can be reopened in the not-too-distant future. But it could be a struggle.

The line closed in 1969 but the campaign really took off after the closure of Viasystems factory in Galashiels in 1998 devastated employment prospects in the area.

Even then, it took three years to get the necessary Bill through the Scottish Parliament, longer than it took to actually rebuild the line.

A new book by Ann Glen "The Waverley Route. Its Heritage and Revival" has been published to coincide with the Borders line reopening. Lily Publications. £19.50. To order: nicola at lilypublications.co.uk