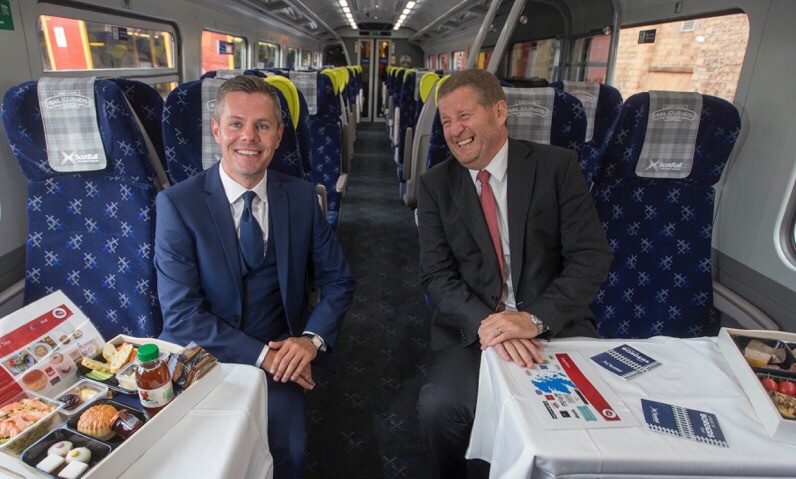 Scottish transport minister Derek Mackay, left, and ScotRail Alliance managing director Phil Verster with Scottish snacks inside the first refurbished train. Picture by ScotRail
Trains ready for the reopening of the Borders Railway on Sunday (6 September 2015) have been unveiled by ScotRail.

The trains are being modernised as part of a £14 million project. There will be improved seating and lighting, at-seat power sockets for passengers, CCTV and automated passenger counting.

The two-carriage class 158 trains, dating back to 1989, are being painted in ScotRail’s Saltire livery.

The 137-seat trains are being upgraded specifically with Scotland’s scenic railways in mind, so seats are aligned with windows to offer panoramic views.

The refurbishment project is being funded by ScotRail, and jointly managed by rolling stock company Porterbrook.

The work is being carried out at Springburn, Glasgow, by Knorr-Bremse RailServices.

“The first carriages off the production line will start their journey as part of the historic Borders Railway launch, with all the benefits that will bring for the Borders, Midlothian and Edinburgh economy,” he said.
More of the revamped trains will appear between now and April 2018 on routes across Scotland.

ScotRail Alliance managing director Phil Verster said: “We have listened to customers, and that feedback is reflected in the upgrades being made. Seats are better aligned alongside windows, interiors are brighter and more modern, and people can charge phones and laptops during their journeys.”

Public service begins on Sunday 6 September 2015, although the Queen will officially open the railway with a special steam train trip on the day she becomes Britain’s longest-serving monarch, Wednesday 9 September.