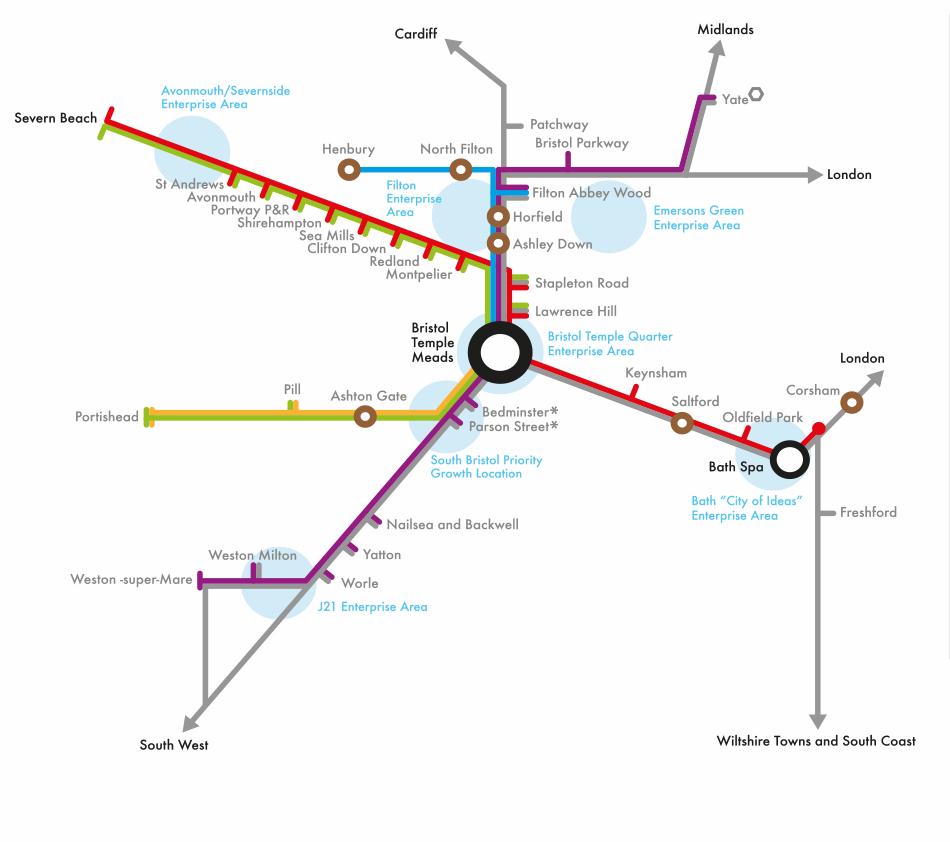 What is planned to happen

When fully implemented, the MetroWest project will provide half-hourly train services on all routes within the main Bristol commuting area, although the frequency between Bristol Temple Meads and Bath Spa will be every 15 minutes including InterCity trains to/from London Paddington. In 2012 the Government promised £94m to the West of England Partnership (WEP, comprising the four unitary authorities of Greater Bristol) to implement the scheme as part of the Bristol City Deal, subject to the creation of a Board, such as an Integrated Transport Authority (ITA) or a concession similar to Transport for London, to deliver the improvements.

The project is being implemented in two stages. Phase 1 includes upgrading the Severn Beach line with train services becoming half-hourly east of Avonmouth and hourly to St. Andrews Road and Severn Beach. There will also be half-hourly train services at Keynsham, Oldfield Park, Parson Street and possibly Bedminster. The main capital works involve reopening of the Portishead branch to passenger trains, with stations at Portishead and Pill. Public consultation on reopening the Portishead line included the design of these two stations and closed on 3 August 2015. The Railfuture submission asked for land to be safeguarded at Portishead for future enlargement of the station and at Ashton Gate to develop a station as soon as practicable after the Portishead line is open.

A station at Ashton Gate is not included in the Development Consent Order for works on the Portishead scheme but MetroWest literature shows it and two other possible stations on the proposed Phase 1 network, subject to a separate business case. The two other potential stations are at Saltford (between Keynsham and Oldfield Park) and Portway (between Avonmouth and Shirehampton).

Phase 1 was intended to introduce new cross-city services such as direct trains between Severn Beach and Bath and/or Portishead. The new services were due to commence in late 2019 or the first half of 2020 but further delay to Portishead reopening (rescheduled to 2021) has now arisen because the GRIP 3 Stage of the scheme identified higher than expected costs in upgrading the freight-only Parson Street- Pill section of the route to allow passenger trains to run at 50 mph. Network Rail has said that easing out curves to raise line speed will require complex engineering work in the Avon Gorge.

We are not convinced that the latest (March 2017) estimate of £145m to £175m is a true reflection of the work actually required, as we understand that about a third of the estimate is for contingency. Nor do we consider that a 50 mph passenger service is necessary on the Portishead line, at least not initially. A 40 mph or even 30 mph service would not require drastic realignment of tracks and would still be competitive with road transport, especially in peak hours. We urge the West of England Partnership and Network Rail to lose no more time in delivering a realistic service because the longer it is delayed, the more difficult it will be to reduce car usage from new housing developments in the area.

On 17 July 2015 the West of England Partnership’s Joint Transport Board resolved to prepare an outline business case for MetroWest Phase 2 including the extension of Weston-super-Mare- Bristol Parkway local trains to Yate; and a Henbury spur service with new stations at Ashley Down, North Filton and Henbury. Consultants to the Partnership dismissed the case for a Henbury loop service extending west to Avonmouth via Clifton Down to Temple Meads, claiming this would attract only 8,000 more passengers per year than the proposed spur. This has been challenged by Railfuture in a letter published in the Bristol Post and by Friends of Suburban Bristol Railways. There was a lively discussion of the consultants’ conclusions at a MetroWest Update meeting at Worle on 22 July, although there was a consensus that MetroWest required phased implementation. It was also confirmed that the spur service would not prejudice its extension into a loop, although campaigners fear this may be many years after 5,000 additional homes have been built along its route. Consultation on the siting of Henbury station will take place later in 2015 and Phase 2 is due for completion in 2021/22.

The project was renamed from Greater Bristol Metro to MetroWest in 2013, ostensibly in an effort to involve neighbouring local authorities such as Gloucestershire, Wiltshire and Somerset. Many existing train services extend far beyond the boundaries of the four unitary authorities of Greater Bristol but it is not yet certain how far MetroWest will extend. One of the few definite proposals for a new station slightly outside the Greater Bristol boundaries is Corsham and this too depends on a business case. We may well see Phases 3 and 4 of MetroWest enhance the network in neighbouring counties.

Analysis of the scheme

Railfuture strongly supports MetroWest in principle as it has long argued that the Bristol area has been the poor relation of other major UK conurbations in terms of local train services and integration with other modes of transport. The local rail network was depleted of routes, stations and track capacity in earlier decades when there was overwhelming emphasis on car transport. MetroWest would unlock the potential of the rail network to improve the economy and environment.

Usage of Bristol suburban stations has risen dramatically in recent years and this augurs very well for the success of the additional stations and routes which MetroWest may introduce. They could be largely self-financing, as demonstrated by the 40-minute interval service operated on the Severn Beach line since 2008, which required less subsidy from Bristol City Council because more trains produced more passengers.

To make the enhanced network possible, four tracks are needed instead of the present two between Dr. Day’s Junction (north of Temple Meads) and Filton. Reinstatement of the second pair of tracks, removed in the mid 1980s, is essential for the segregation of slower and faster trains. A contract for the work was let in 2014 and vegetation clearance began in the spring of 2015.

Railfuture’s responses to two GW Franchise Consultations, in 2012 and 2014, called for more electrification of suburban routes to follow the GW Main Line electrification which is due to reach Bristol Parkway from London in 2018. Until the local routes are electrified, it is very important that the Metro services are provided by rolling stock of a high standard with passenger comfort in mind. We welcome GWR's intention to cascade Class 165 and 166 trains to the West of England when they are displaced from the London and Reading areas by electrification, but are concerned at the delay arising from the deferral of electrification to Bristol Temple Meads, Oxford and the Thames Valley branches. We are asking for a partial cascade as soon as electric trains begin to serve Didcot in December 2017.

Buying a ticket to travel on an enhanced network needs to be made as convenient as possible. Railfuture’s submission to the Fares & Ticketing consultation by the DfT in 2012 called for a wider range of retail outlets to sell tickets as well as for the retention of station ticket offices. The M Shops at Merseyrail stations are an example of how staffing of suburban stations can be viable. However MetroWest is managed, all its ticket outlets should sell tickets to all destinations on the national rail network. Likewise there must be integration with ticketing systems for bus, ferry and any future light rail systems in the Bristol area, eg with Smartcards valid on all modes of public transport.

Railfuture has concerns about the possible fragmentation of train services in the region if MetroWest serves only Greater Bristol at the expense of frequency and quality of service in neighbouring counties. The downside of half-hourly local trains radiating for, say, 50 miles from Bristol could be less attractive journeys for some longer distance passengers. It is very important that the lines towards Bristol from Gloucester, South Wales, Swindon and Taunton have hierarchies of fast, semi-fast and stopping trains. This would be in keeping with Network Rail’s 2013 Regional Urban Market Study which concluded that, for rail to attract commuters, the normal journey time into a large city needs to be under an hour each way.

If you support this proposal please contact Nigel Bray of Railfuture Severnside at nigel.bray2 at railfuture.org.uk