LATEST NEWS - March 2022 As we’ve reported before the North East Transport Plan, covering the period from the current year to 2035, included plans for a new station at Gilsland on the site of the former station building. The proposal is contained in a section headed “Schemes for development and delivery in the next ten years” with a note attached saying that delivery of the schemes in this section can commence at short notice. We said at the time that although the money for the new station had not yet been identified it was good news that the project now had regional backing. An attempt was made to get funding to build the business case through the Restoring Your Railways Fund but this was not successful. Transport North East have been working to develop a strategy for the development of both Rail and Metro, with a draft that is now out for consultation and available on the Transport North East website. The strategy still includes the Gilsland Station proposal to be completed between 2029 and 2035, but again without a clear proposal as to how it could be funded.

INTRODUCTION
Gilsland station was originally opened on 19 July 1836 when it was known as "Rose Hill". It was renamed "Gilsland" on 1 May 1869 and, after having been proposed for closure in the Beeching Report, closed to passengers on 2 January 1967. Goods facilities were withdrawn on 5 April 1965. 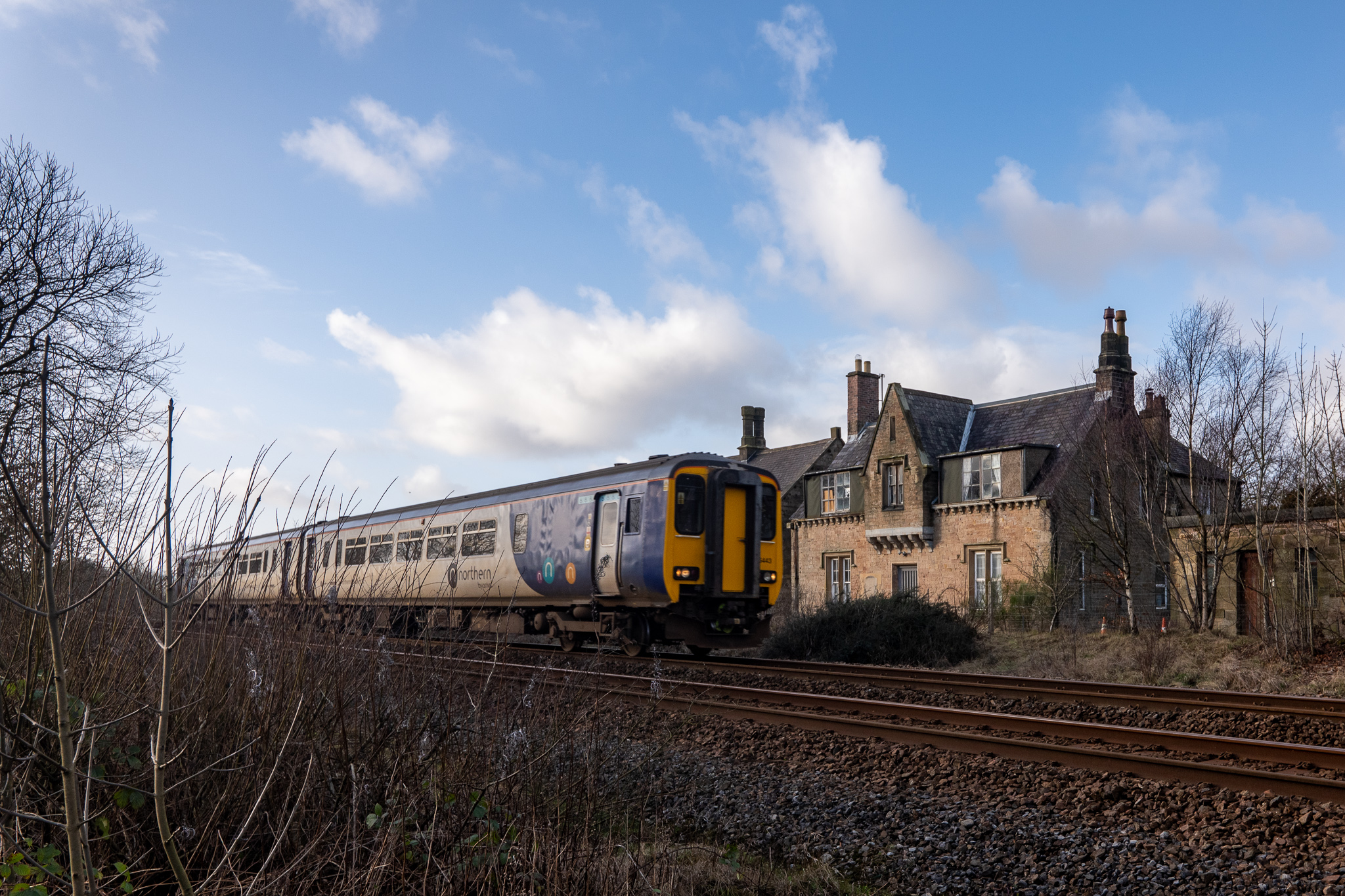 Class 156 passes Gilsland Station
FIRST STEPS
The Campaign to Open Gilsland Station (COGS) want to re-open the station and point to the considerable benefits to both local people and visitors. The potential for the station's reopening was assessed in 2001 and in 2005 in the Tyne Valley Route Strategy. Unfortunately, neither study found that 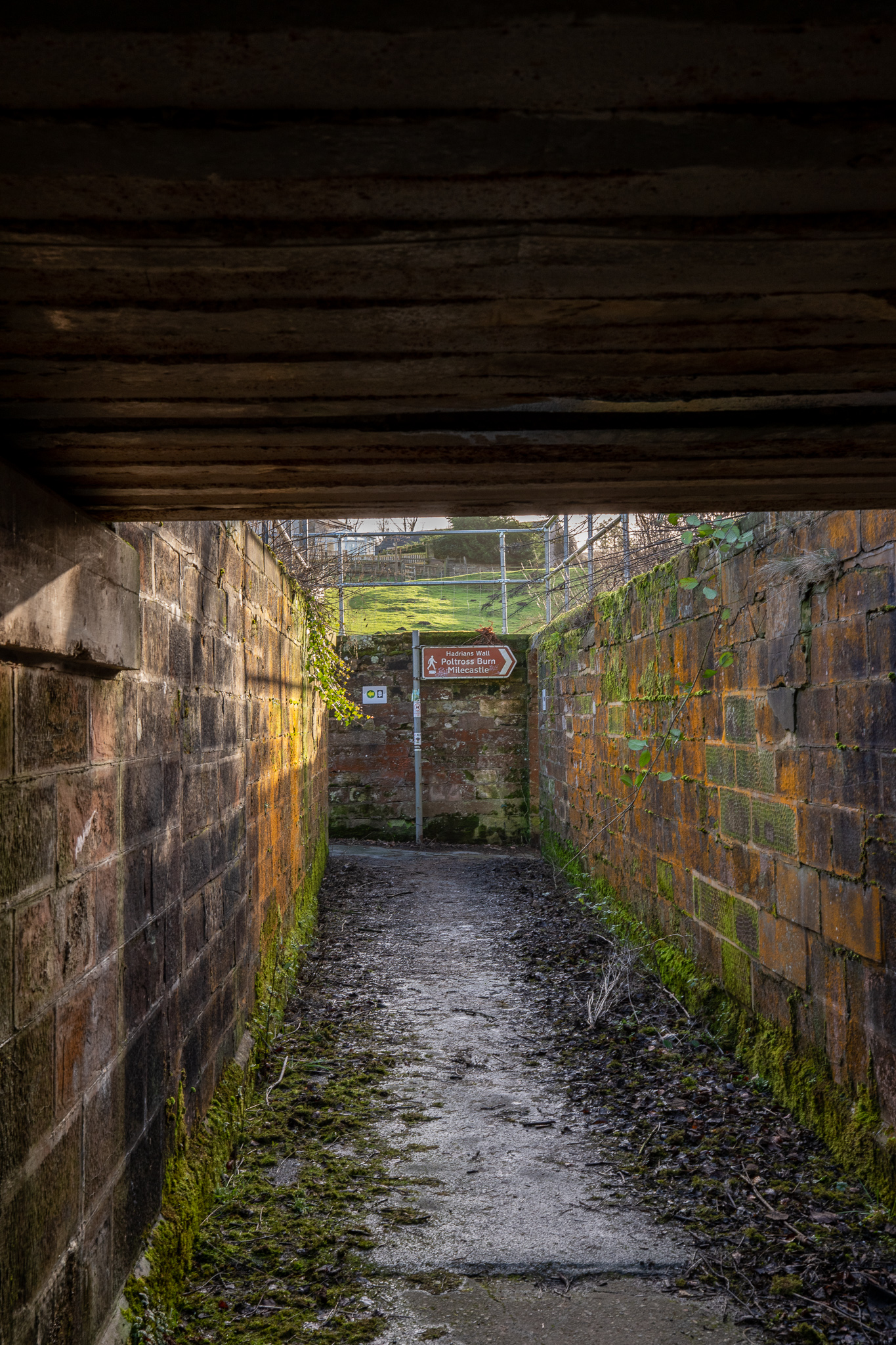 The old underpass at Gilsland leading straight to Hadrians Wall Trail
there was a case for reopening. Crucially, and fatally to the conclusions then reached, potential demand was assessed only in relation to the local population and not with regard to possible visitors to Hadrian's Wall. This is important because Hadrian’s wall is now actively promoted as a tourist destination and the area around Gilsland includes many local attractions. A revived station would offer easy car free access to these attractions, to the Hadrian’s Wall National Trail and to the local sections of the cycle route that runs the full length of the wall.

LOCAL CAMPAIGNS TO DEVELOP THE ECONOMIC CASE
In May 2013 the Tyne Valley Rail Users Group asked JMP Consultants to assess the potential for the reopening of the station to provide access to Hadrian’s Wall. The report was published in August 2013 and concluded that there is an economic case for reopening the station if spending by additional visitors to the area is taken into account.

Restoring Your Railway Fund
On 2nd June 2020 the Hexham Courant reported that Transport Minister Chris Heaton-Harris has written to Hexham’s MP, Guy Opperman, to say officials would be working with local representatives in the coming weeks to move Northumberland County Council’s application to reinstate Gilsland Station forward.
It seems that an application has been made to the “Restoring Your Railway fund”, a fund that includes at least £20m assigned to feasibility studies for the reopening of old railway stations. The Minister said that the proposal “might deliver benefits” and, subject to further information, could be pout forward for consideration in June or subsequent official reviews. He went on to say that Guy Opperman, along with other sponsors and promoters, was to be invited to attend a workshop in early June.
Northumberland County Council’s plan to reopen Gilsland is being sponsored by Mr Opperman and has the backing of Penrith and Border MP Dr Neil Hudson, Northumberland National Park Authority, the Tyne Valley Rail User Group and the Tyne Valley Community Rail Partnership, the Campaign to Open Gilsland Station, Hadrian’s Wall Partnership and a number of councils which span across the Northumberland and Cumbria border.
Mr Opperman is quoted as saying “We are not there yet, but we are getting closer and we have a fair chance to secure the funds thanks to the incredible support of community groups, councils, MPs and agencies right across Cumbria and Northumberland.”

If you’ve enjoyed reading the above, why not consider joining Railfuture. You can do so at https://www.railfuture.org.uk/join/. When you log in to the Railfuture home page you will see a whole range of information about our work and, from this page, you can link to the North East Branch for details of local activities and campaigns.