Cambridge North station opened on 21st May 2017 at a cost of £50 million (after funding approval in the 2014 Autumn Statement), thirty years after it was first proposed.

Railfuture had consistently campaigned for the station since the early 1990s, arguing that it was essential to serve the growing and economically vital technology centre in the north of Cambridge, which includes Europe's longest-serving and largest centre for commercial research and development.

The station’s opening was big news, which BBC Radio Cambridgeshire hosting their breakfast show there (Dotty McLeod far right in photo below) and Greater Anglia’s Jamie Burles being present for 12 hours (far left in photo below) to handle media interviews. 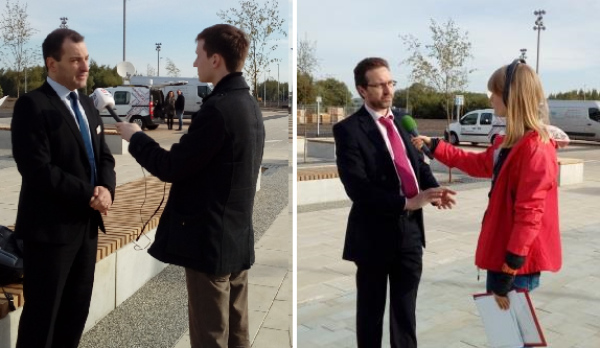 From its opening Cambridge North has been serviced by Greater Anglia’s hourly Norwich-Cambridge service and its trains to Liverpool Street. However, there is a phenomenal leisure market and King’s Cross is the preferred London terminus because the trains are much faster.

Once Greater Anglia’s new bi-mode trains are all in service in 2020, the Norwich service will be extended to Stansted Airport, finally giving the station an hourly direct service. Railfuture would like the Cross Country trains to call at Cambridge North, giving not just a second train to Stansted but also a direct service to the important but economically-challenged Fenland town of March, the city of Peterborough and beyond all the way to Birmingham. However, the Cross Country trains are short and frequently overcrowded so the operator is currently unwilling to stop its trains, despite lobbying from Railfuture and local authorities.

The station is now well used, with the business case’s three-year target of 800,000 journeys (measured as entries and exits) per year certain to be met. At times the London-bound through platform can be quite busy indeed, as shown below.

Like all major developments, there were initial teething problems. The worst was the very unreliable ticket machines - it was rare for all three to be working – and it took time to re-program them to sell car parking tickets. The lifts were also unreliable in hot weather. These problems have all been resolved so anyone put off by an initial poor experience should give the station another chance.

Cambridge North Station has 1,000 cycle parking spaces, a 450-space car park with car parking payable online, by mobile phone or on the ticket vending machines in the station and bus stops served by the Citi 2 bus and busway buses. There is also a taxi-based peak-time shuttle from the Science Park.

Single, return and 7-day season tickets are available from the ticket vending machines (TVM). All tickets, apart from train-specific advance tickets, to and from Cambridge are also valid for Cambridge North and vice-versa. Railfuture continues to campaign for better ticketing including smart card tickets which can be purchased online and uploaded at the station for monthly, period and annual season tickets.

Unfortunately, and unlikely the station ‘hosts’ at other operators such as Chiltern Railways, the staff present in daytime to help people use the machines they are unable to sell special tickets not available from the TVMs (such as the Anglia plus Day Ranger, CIV ticket to ‘London International’ for Eurostar journeys, and monthly season tickets) or to replace incorrectly-bought tickets and give refunds. For this it is necessary to visit a station with a ticket office, such as Cambridge.

The station was built with areas for a coffee outlet and a mini-supermarket. Initial issues between Network Rail and Greater Anglia involving a full legal handover of the station delayed the signing of contracts with retailers. Costa Coffee opened in July 2018 and is now very popular, with a constant stream of customers. Sadly, by the second anniversary of opening (May 2019) there is still no occupant for the shop, despite the Co-Op planning to open it back in February 2018 (as shown below).

An adjacent hotel is currently being constructed, and it will be followed by offices and a large number of apartments. Certainly by 2022 the station area with be vibrant, and Railfuture has predicted could reach 2.5 million passenger journeys per year.

Cambridgeshire County Council produced its business case in 2009, initially intending to fund the station itself and re-coup the investment through fares. Eventually the Department for Transport decided to fund the station itself, seeing the national significance of it. The development was then transferred to Network Rail and the planning process took an excessive amount of time because two separate applications were submitted (first by the council and then by Network Rail) as the scheme changed.

Network Rail's planning application for this new railway station was approved by the Cambridge Fringes Joint Development Control Committee on 19 August 2015 subject to the completion of a section 106 Agreement between Network Rail, Cambridge City Council and South Cambridgeshire District Council.

The link opened with Cambridge North Station on 21 May 2017, significantly improving pedestrian and cycle access from the new railway station to Cambridge Science Park, the Cambridge Business Park and the St John's Innovation Centre. Annoyingly, it was temporarily closed in April 2019 for several months being dug up in order to install utilities. Pedestrians and cyclists were then diverted to use the parallel link (on the other side of the Business Park) along the Cambridgeshire Guided Busway. Th photo below shows the link and gives one example – sadly of many far too numerous to mention – of inadequate signage where the ‘invisible’ station is not mentioned. 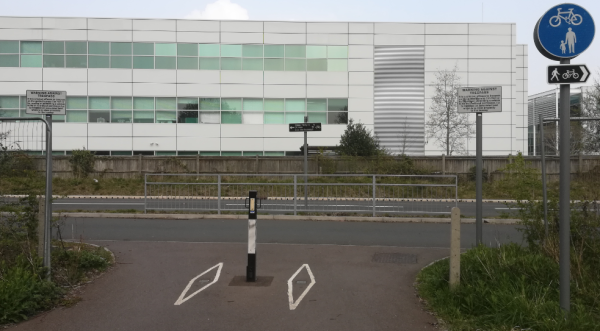 The Railfuture East Anglia response to Network Rail's planning application can be viewed here covering our concerns about the inflexible track layout that limited the station’s capacity to handle the increasing numbers of trains, and the plan to reduce the length of the canopies:

In November 2012 Railfuture East Anglia responded to Cambridgeshire County Council's Cambridge North (then called Science Park) Station Consultation, with lots of thoughts on how the station could be designed for the best passenger experience, based on our experience of poor-designed stations elsewhere in Britain, and best practice elsewhere in Europe.  Many of our views were taken on board.  Read our five-page detailed response and judge for yourself how well we did.

Railfuture followed the construction of the station with great interest and was also invited to a site visit in February 2017, three months before it opened, when must of the ground was still mud.

Read this Railfuture April 2016 article about the progress.

The RAIL EAST September 2018 issue (pages 9-10) reviewed the station and gave thoughts on what the railway needed to do to grow patronage further.
See the Railfuture East Anglia main page.