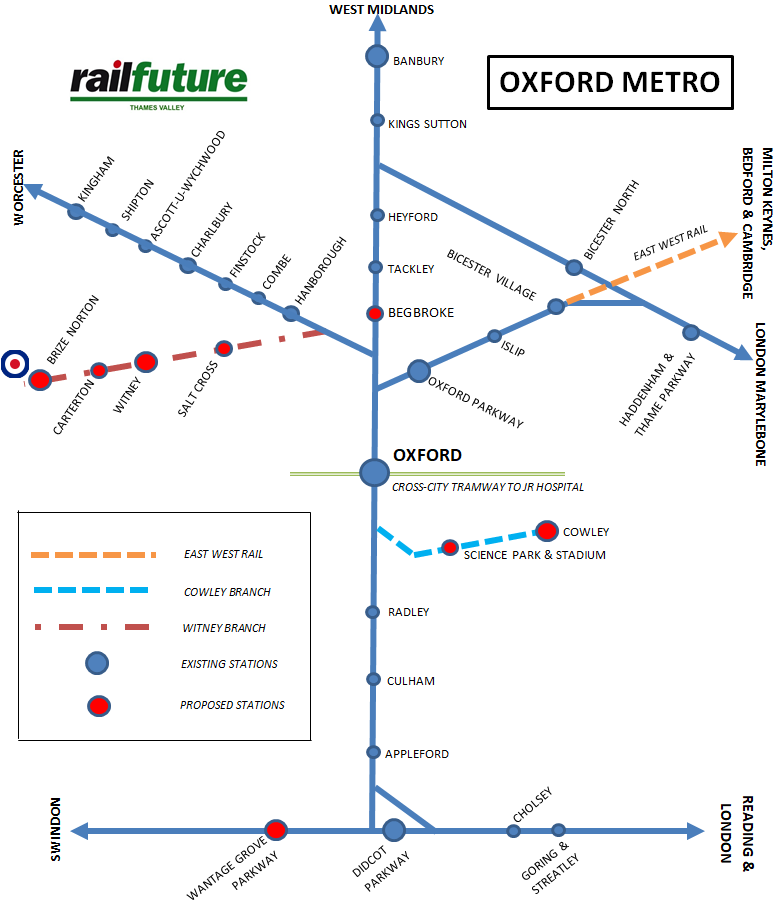 Oxford has ambitions for remodelling the station with additional platforms, and introduction of metro-style services in the area around the city, including to Cowley, Witney and John Radcliffe Hospital.

Despite the pandemic, Oxfordshire continues to have significant economic growth based on digital technology, aerospace and life sciences. It lies at the western end of the so called knowledge spine or Oxford-Cambridge Arc. Expansion of Oxford City is severely constrained by the surrounding green belt and as a historic city it suffers from severe traffic congestion. House prices are amongst the highest in the UK with the result that people, many of them ‘key workers’, have to live in the surrounding towns and villages. Significant housing growth is planned by the various District Councils but many of the chosen locations have poor connectivity to the centres of employment. Oxford’s rail routes link well with Reading, London and the Midlands but suffer from overcrowding, limited track and station capacity and also having to share with multi-modal freight trains from Southampton Docks.

Experience from elsewhere in the country demonstrate the benefits of a growth plan with an incremental approach to expansion of the more local network, integrating with housing and employment areas across the County. This also supports the decarbonisation agenda reducing private car use. Although not as large as Greater Manchester or the West Midlands, nevertheless the same approach for incremental expansion is valid and is already being pursued in Cambridge. The use of the term Oxford Metro helps to reinforce this network approach which includes last mile considerations of other types of public transport, cycle and pedestrian links. Railfuture Thames Valley started campaigning about a cross-City network approach in 2015 when it published leaflets 'Hanborough & City Line' and 'Trains 4 Cowley' setting out the advantages to the community and operationally. The then transport minister Claire Perry expressed strong support to us for our Hanborough ideas.

Benefits of local investment over the last few years have been demonstrated by the opening of Oxford Parkway station on the new Chiltern Railways link to London Marylebone, greatly exceeding its predicted passenger numbers and well served by local park and ride bus connections. (Railfuture Thames Valley had presented supporting evidence at the public inquiry into this scheme in 2010). Further opportunities lie with reversal of “Beeching” cuts using DfT’s Restoring Your Railway Ideas Fund. A first priority, with strong support from Oxford’s MPs, is re-opening of the Cowley branch line, currently used for freight to the Mini factory, creating a cross-City link to Science Parks and significant new housing areas, utilising extended services from East West Rail (due for completion in 2024) and Hanborough on the North Cotswold Line, also a location for major housing development. Quadrupling will be required between Oxford station and the junction for Cowley.

The John Radcliffe and Churchill Hospitals are located well to the east of the City centre and suffer from significant traffic congestion. International medical research centres are located nearby. It would not be feasible to extend heavy rail to this area and therefore the most appropriate investment would be a conventional street electric tramway (with battery back-up through sensitive architectural areas) from west of the station to the hospital area. It will be necessary through parts of the city centre to have sections of single track running along parallel streets, similar to Croydon, and loop routes at each end.

To the south of the County major housing growth is also planned around Wantage and Grove, adjacent to the technology hotspots at Harwell. The proposed station at Wantage/Grove Parkway to the west of Didcot on the GWML would provide much improved connectivity.

Lastly, but by no means least, Witney (population c.28k in 2011) is the largest town in Oxfordshire without a rail station. Along with adjacent Carterton (population c.16k and home of RAF Brize Norton) even more major housing development is planned. Currently access to employment requires use of the very congested A40 or an alternative route across an 18th Century toll bridge. Even if it were doubled the A40 would still suffer from the bottleneck at Wolvercote Roundabout on the Oxford outskirts. Some of the Witney branch track bed is still extant which could assist re-opening but a new link into Carterton and the RAF transport HQ would be necessary. At its eastern end the branch would serve the planned large housing developments at Eynsham (population c.5k and set to double) and Salt Cross Garden Village and then connect into the North Cotswold Line. Following the launch of the third round of the Ideas Fund, the Rail Minister Chris Heaton-Harris has stated that this type of scheme was exactly the sort of thing DfT were looking for that could make a local difference without too much money, a sentiment supported by local MPs. A proposal is being put together by Witney-Oxford Transport group (WOT) with other local support for submission to the Ideas Fund in March 2021.

All of the above of course depends on Network Rail completing their existing plans for infrastructure improvements along the corridor. These include the additional down platform at Oxford Station in conjunction with Oxford City Council, quadrupling the tracks between Didcot and Oxford (which should also permit improved services to Culham another technology hotspot), re-doubling the track between Wolvercot Junction and Hanborough (including additional turn-back platform at Hanborough Station) and hopefully the completion of electrification. It is also vital that East West Rail is completed on time as planned, opening up connections to new housing and employment to the east including Milton Keynes and Bedford. (In 2019 Railfuture Thames Valley also presented supporting evidence at the public inquiry into the latter).


A demonstration train ran along the Cowley branch as long ago as 5 November 2014!

Plans for Cowley branch have been on, off and back on again, with a walk of the route.

Oxford East MP wrote to the Transport Secretary on 10 June 2020 indicating the strong likelihood of a bid to the third round of the Restoring Your Railway Ideas Fund.

Witney Oxford Transport's response to West Oxfordshire District Council's consultation on its pre-submission draft Area Action Plan for Salt Cross makes the case for a rail-based option in the A40 corridor, part-replicating in 21st-century form the former Fairford branch.

Archive film of the Fairford branch through Witney, the last train in 1962 and a 2016 documentary including an interview with a former user and still Bampton resident.