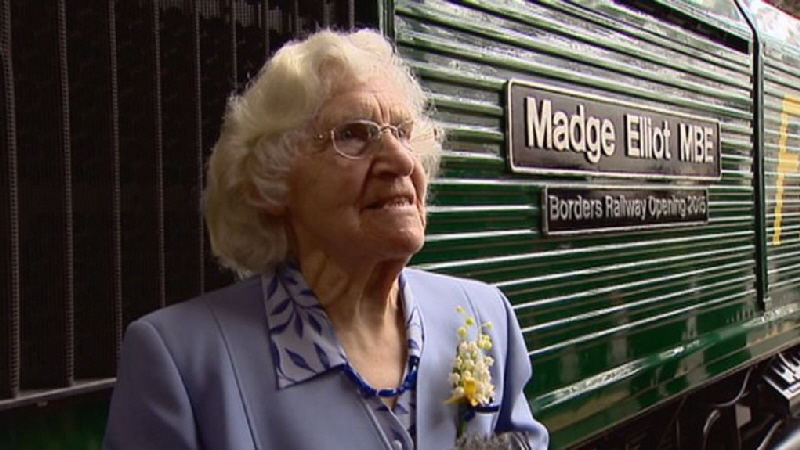 Rail campaigner Madge Elliot in 2015 when a locomotive was named after her.       Picture: BBC
Madge Elliot’s son John is making the longest cross-border rail journey in Britain next month, to promote the campaign to reopen the Borders Railway from Tweedbank to Carlisle, as well as raising funds for vital medical research.

John (better known as Kim) will be walking from John O'Groats to Thurso on Saturday 14 July 2018 and taking the train from Thurso to Aberdeen via Inverness on Sunday 15 July.

Then John, who lives in Hawick, will take the CrossCountry train from Aberdeen to Penzance on Monday 16 July, which is Britain’s longest continuous train journey.

On Tuesday 17 July, he will complete his journey by walking from Penzance to Land's End.

While John plans to raise awareness of the Campaign for Borders Rail, he’s also raising funds along the way for Alzheimer’s Research UK. He believes there is a parallel between re-linking communities with railways and the need to reconnect memory links for people living with Alzheimer’s.

For John, it is a very personal campaign because his mother, the famous rail campaigner Madge is now suffering Alzheimer’s at the age of 90.

Madge is renowned for her campaigning since the 1960s to save the Edinburgh-Carlisle Waverley line and her fight to get it reopened after it closed in 1969.

In 1968, with John, then 10, and Liberal MP David Steel, she delivered an 11,000 signature petition to Prime Minister Harold Wilson at 10 Downing Street.

The Borders line from Edinburgh to Tweedbank was finally reopened in 2015 and campaigners are now fighting to get the stretch from Tweedbank through Hawick to Carlisle reopened.

You can donate to help John’s fundraising for Alzheimer’s Research UK at: