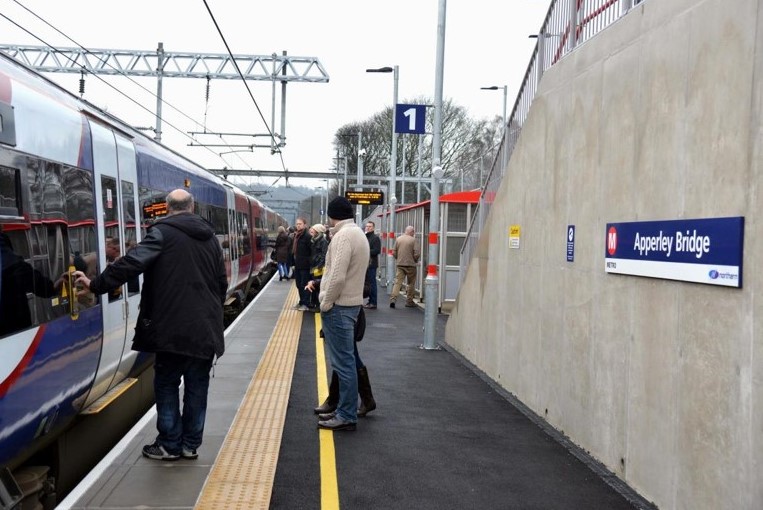 The government’s Strategic Vision for Rail, published on 29th November 2017, sets out a vision for our railways. The proposal to reopen lines closed by Beeching captured the attention of the press, but equally significant were the proposals for joint operation of train and track and changes to the franchising system. Photo: Apperley Bridge, which opened in 2015, is an example of a rail development which unlocked new housing in an area within commuting distance of Leeds.

On 17 October 2017 Secretary of State for Transport Chris Grayling announced a massive financial settlement for the rail industry for the next 5 year “Control Period” (CP6) which runs from 2019 until 2024. The figure was £47.9bn (almost exactly the same figure as currently envisaged for Brexit -50bn Euros). Within this figure a massive £34.7bn is planned to come directly from government, the remainder from track access charges (the regulated price that Network Rail charges train operating companies for use of the network).

This should have been the big statement, yet it lacked physical detail and was met with muted or sceptical response.

It was somewhat surprising therefore that a “big” announcement was widely trailed and leaked then came so soon after, on 29 November, particularly as so few facts have since emerged on CP6 content.

The main issue announced on 29 November was the proposed structure of the next ‘Southern’ franchise, termed as “fragmentation” by those who have forgotten or chosen to forget recent history. In 1996, at the time of privatisation, the government championed competition citing three operators, Southern, Thameslink and Gatwick Express all serving Gatwick Airport as the lynchpin of this strategy. This of course left huge swathes of the south served by a monopoly operator but it did bring limited competition to the Brighton Line. This was fine until the last round of franchising. The real reason why these three franchises were combined was to facilitate the Thameslink/London Bridge upgrade. The 14 stage plan for London Bridge in particular required total cooperation amongst the rail operators and current compensation arrangements are recognised as not suitable for a large project where cooperation to implement the bigger picture has to outweigh narrow inter toc issues. This has worked well for the London Bridge project – a project that has been managed well without claims between operators dominating. Revenue risk was removed from the combined franchise as part of this process.

The announced arrangements are simply a post London Bridge project reinstatement of the previous situation rather than fragmentation in this case. An added impetus here, of course, is to mitigate frequent strikes, particularly as Thameslink is Driver Only Operated and has been for many years since introduction by BR.

The devolution to Transport for London in the form of transfers to London Overground operation is also in the mix, but the announcement is restrained. The West London Line service from Milton Keynes to East Croydon has been specifically under discussion for many years and is proposed to transfer to TfL. The trade off here would probably to curtail this at Watford Junction but increase frequency and add Old Oak Common stops. Southern were not proposing to serve the projected Crossrail/HS2 station at Old Oak Common!

There are several other routes that may transfer to TfL, North Kent lines and the Moorgate Thameslink inners being the strongest cases, but the announcement mainly concerns inner Southern services. There is no detail at the moment but there are two principal options. The first option is to try and carve out some inner suburban services such as London Bridge to Victoria via Crystal Palace and transfer to TfL. Scope for this is quite limited owing to the service pattern. A more fundamental option set against the need to provide more capacity involves service restructuring as many services currently have a dual role serving some inner as well as outer suburban stations. More capacity is needed both in inner London and also on services running further out. This is preferable when set against Railfuture’s objectives but is harder to organise and to be optimal requires investment.

The South Eastern franchise is also curious. The industry was sworn to secrecy about the transfer of 15 4-car Electrostars displaced from Thameslink and redeployed on Maidstone services. This was a important development in terms of upgrading that route but also in terms of cascading other trains to strengthen inner suburban trains. However the big announcement majored on abolishing first class on South Eastern, half of which has already gone as each train is refurbished. Populist - probably but in the scale of things irrelevant.

The South Eastern franchise ITT also contains the requirement for the operator to set up an Alliance with Network Rail, with a joint team operating the trains and the tracks on a day to day basis. More controversial is the creation of a partnership between Virgin Trains and Network Rail by 2020, before the back-end loaded franchise premium payments kick in, which will avoid a difficult negotiation between DfT and Virgin over non-delivery of infrastructure improvements by Network Rail.

All this is relatively logical if not earth shattering. The announcement however mentions consultation on breaking up GWR. The suggestion, subject to consultation, is to split the route to Devon and Cornwall into a separate franchise, which would include the feeder branches, so retaining contributory revenue within the new franchise. The idea is less satisfactory in the Bristol area, where many trains run via Bristol. It is not clear if this proposal has anything to commend it other than to increase complexity and franchise bidding and letting costs. The Railfuture branches in the South West will be keeping a close eye on developments and will be actively involved in the consultation.

On Brexit, the elephant in the room in terms of railway development is procurement, both of projects and importantly rolling stock where a complex, usually international supply chain is involved. This will not become clear until after a trade deal between the UK and the EU is eventually agreed and is not therefore covered in the announcement. There are however a couple of hints in the franchising area now that EU legislation is transferred to UK as a starting point for future change. It is likely that the franchise timescales allow for a different direction in terms of Open Access and infrastructure separation. The push for these was clearly signalled in the UK budget discussions where “efficiency” is probably the key concern with the UK economy. Railways will not be immune from this hence government determination on issues such as DCO, where the RMT is seen as determined to snatch defeat from the jaws of victory.

Firstly open access: Open access has worked well in Britain for all freight trains, fostering competition and investment. In terms of franchising however, open access has fostered limited new initiatives to develop passenger services but the real concern is “franchise value”. Open access is seen as undermining the proceeds from letting franchises, a concern long held by the DfT. Politicians like it, but it is clear that we will see far less emphasis on further open access in the future. The other issue is infrastructure separation. There is no suggestion in the announcement that Network Rail will be broken up and combined with rail operators but the move towards cooperation along each rail route continues as is the need to see more private investment in infrastructure schemes. The Oxford-Cambridge special purpose model is the one to watch here.

Railfuture campaigns for a bigger, better railway in Britain and has sharpened up its governance to ensure we are more effective in doing this. One specific example is Oxford – Cambridge, which has a strong business case but also ticks important government boxes on housing and the economy. Railfuture has been at the forefront of this campaign, joining with other stakeholders effectively. This has paid off.

The announcement also includes a more populist statement giving an impression that many ex-Beeching lines may be reopened. This does not mean we will be campaigning to reinstate every branch line in the country. In reality, proposals for new lines or stations will only succeed if they unlock new housing or provide new journey opportunities for growing towns and cities. This is good news, the culmination of many tears campaigning by Railfuture, making the case through reasoned argument. It is a real opportunity for Railfuture to focus on developments which are deliverable and financially sustainable. We have established criteria against which to test proposals designed to focus in on the potentially viable ones. When we are satisfied and where we have commitment and the physical ability we then campaign, with, not against, stakeholders, as with Oxford – Cambridge. There are quite a few schemes such as March – Wisbech that do satisfy Railfuture’s criteria and we will be going head on for them., following the approach outlined in the Expanding the Railways booklet.

These are exciting times for Railfuture. We are very aware of the potential for focused, informed effort. We are also aware of the pitfalls of losing focus and descending to a scatter gun approach, all noise but little delivery. People are joining Railfuture to be part of a success story so this announcement also in one way is a test to ensure our credibility and hence influence with stakeholders and industry players.

A strategic vision for rail DfT press release setting out a vision for our railways, including a new way of operating train and track and changes to the franchising system.

Invitation to tender for the South Eastern franchise

Expanding the Railways : Guide created by Railfuture in conjunction with the Campaign for Better Transport and the Department for Transport to help local communities, sponsors and stakeholders to build the support needed to gain approval and funding for new rail lines and stations.