One core aspiration is to dramatically reduce the journey time between Swansea and Cardiff from 55 minutes to half an hour. Professor Barry, author of the South Wales Metro plan, argues that current journeys are so slow because of the tortuous route through Neath and the curves between Cardiff and Bridgend. To overcome these difficulties, he proposes a new line exiting an enlarged Swansea station from the south using new through platforms. This would follow the route of Fabian Way, in part using disused railway land, before crossing the River Neath and rejoining the existing line before Port Talbot. Through platforms would allow trains from east to west to cross Swansea without needing to reverse, adding a further time saving for these journeys. Finally, the line between Cardiff and Bridgend should be upgraded for at least 100mph running to address the curves here.

Local stations on the new line could serve the new student campus on Fabian Way, the Liberty Stadium and a park and ride near the M4. Other new stations along the Swansea district line and on the existing main line could enable new commuter services from Swansea, including a circular or figure of eight route to Llanelli. This would require a new link between the main and district lines near Llansamlet. Reopening of the Neath Valley line to Aberdulais for passenger use is included and, if tram-train becomes a reality, on-street running between Swansea and Mumbles. 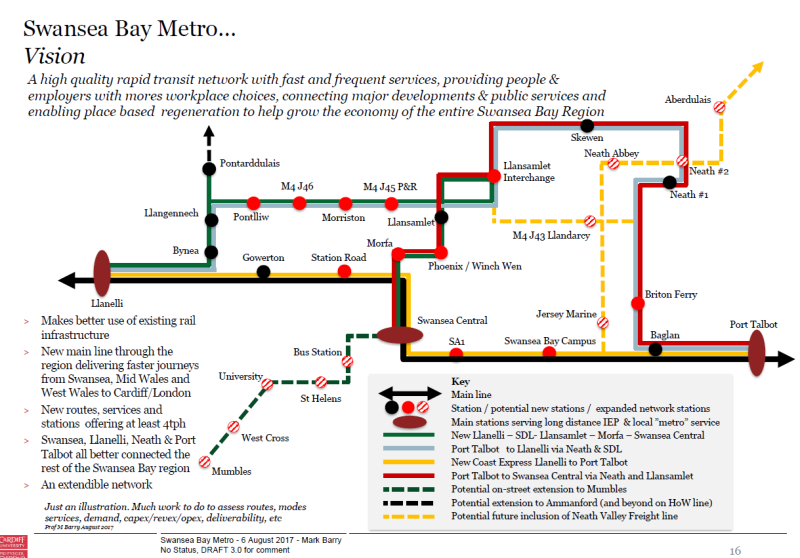 Prof. Barry argues that an ambitious rail-based metro complements the Swansea Bay city deal by making new homes, businesses, schools and hospitals fully accessible without requiring car use. He believes that developing the metro would substantially boost economic development and employment in the Swansea Bay City Region, an area with a population of 500,000.

He admits that with a price tag of at least £1Bn the plan is not cheap but points out that this sum will only buy fourteen miles of new motorway around Newport.

CBI Wales director, Ian Price, supports the idea, and Assembly members Lee Waters (Llanelli) and Jeremy Miles (Neath) have called on the First Minister to launch a more detailed study into the scheme.

We cautiously welcome the concept but some questions need to be answered before giving our support:
None-the-less, if the South Wales Metro can go from being seen as unrealistic to at least partial implementation in just six years, who knows what developments might be possible for Swansea’s rail network. It certainly needs a fillip.