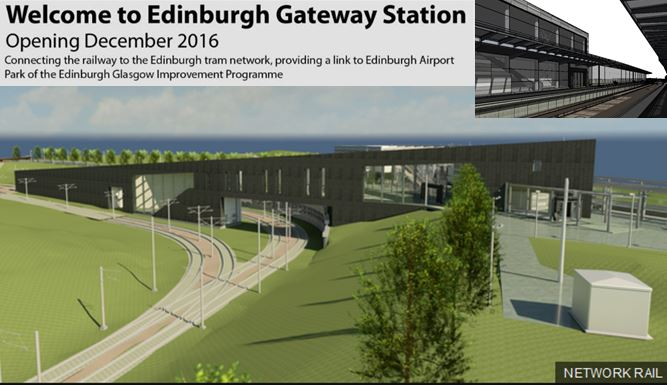 Railfuture has spent decades campaigning for new railway stations to open and for closed ones to reopen. If proof were needed that Railfuture is effective, more than 400 stations have (re)opened in that time. Of course, it’s also important that the stations are ‘up to scratch’. Edinburgh Gateway Interchange station will open in December 2016 and a video (screenshot from it) shows what to expect.
In the past passengers had to wait for a station to open before they could see how good (or not) that it would be.  These days new buildings are designed using computers and construction is planned using them as well. A positive side-effect is the 3D modelling can be turned into a video for promotional purposes.

A 'fly-through' video (by Network Rail and its partners on the project) of Edinburgh Gateway Interchange station can be viewed at https://vimeo.com/181181957. It shows passengers arriving by tram at the lower level and then transferring onto a train at the railway platforms above, passing through the ticket barriers on the way. It also shows a walk from the nearby Gyle Shopping Centre.

It opens to passengers in December 2016. Railfuture will be visiting to see whether it lives up to expectations or not, suggesting improvements to improve the passenger experience. All too often the rail industry does not think enough about its real customers, the passengers. When Birmingham New Street was revamped at enormous cost Railfuture complained about the lack of seating in particular. This has since been rectified.

It’s not difficult to know what matters to passengers. Back in 2012 Railfuture responded to a consultation on the new Cambridge North station (proposed name was then Cambridge Science Park) now scheduled to open in May 2017. Included in its long list of requirements for the station buildings Railfuture asked for:


Sadly not all of these will be provided at the station in Cambridge, but what of the £41m Edinburgh Gateway Interchange? Railfuture director Jerry Alderson gives some thoughts on Scotland’s new station based solely on what is in the video - which does not show some of the fine detail and may only be indicative in some cases - and has chosen seven screen shots (in the same order as the video) to comment upon. 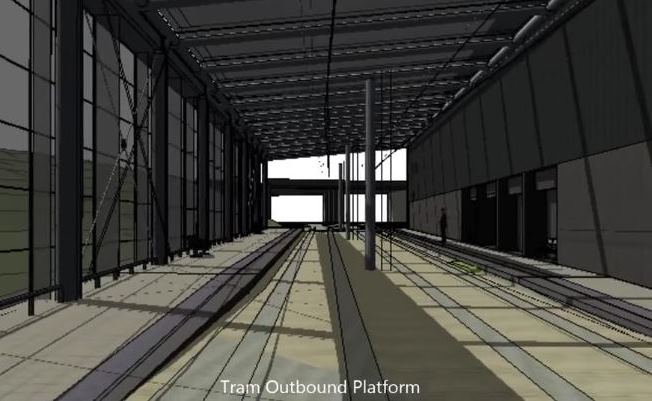 Both tram platforms and the track that passengers walk across are fully covered by a canopy and have protection from the wind. The only draughts will be from the ends of the building, and the video doesn’t show any dividers or enclosed waiting rooms to hide from the wind.

Interchanging between tram and train 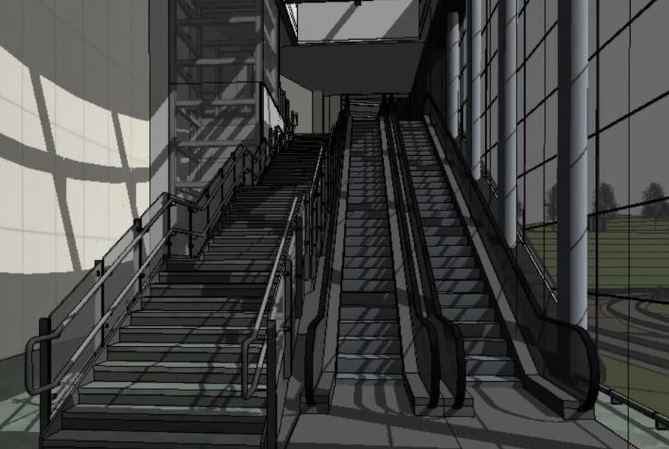 Walking between the trams (at the lower level) and the trains (upper level) requires using stairs, escalators or lifts. Fortunately there are two escalators (one to go up and one to go down), which should speed up passenger movement and avoid queues building up. The stairs appear to be just wide enough to people to go up and down at the same time. The lift shaft can be seen in the background and appears to have glass sides.

In other European countries stations are designed to have resilience and cope with peak demand. Like almost every station in Britain, it appears to have only one lift on each side of the railway tracks. If the lift is out of order then a wheelchair user cannot use the station. It really is time for a Britain, which is one of the richest countries in the world, to meet the world’s best standards and provide a second lift.

Tickets for the train 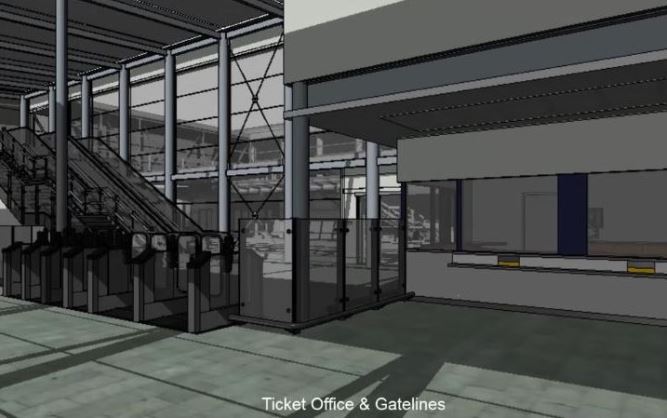 Going upstairs there are two ticket office windows. Disappointingly they have glass windows, which act as a barrier to good customer service. It is unclear how they will cope with the different counter levels needed from a person standing and someone using a wheelchair.

It shows six ticket barriers, two of which are wide.  The ticket office windows are nearby but need separate staff for the gate line. This is inefficient and inevitably means that the barriers will be left open at certain times.

Some modern stations have an open counter close to the ticket barriers, which enables them to also open the barriers when a passenger’s ticket is not accepted. Chiltern Railway pioneered the concept of station hosts where the staff are mobile rather than being fixed behind a desk. Govia Thameslink Railway will be doing the same and it is already in widespread use on London Underground.

The video does not show any ticket vending machines but they will obviously be provided. The video omits them as they are not part of the building infrastructure and can be located anywhere. 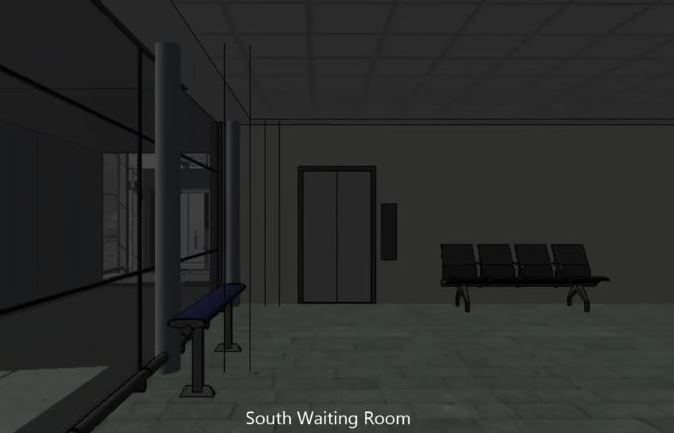 The video shows a bench seat and a row of four seats (without any tables to place drinks, for example) in the south waiting room. Hopefully there will be many more seats available and power-points for charging mobile devices will be provided close to the seats.

A perch seat right next to the lift doors would be helpful for someone who cannot stand long, such as a person using crutches. Unfortunately the lift doors shown are opaque, which is unacceptable, rather than having glass doors or at least windows in them to help passengers feel safe.

If there is no staffed refreshment kiosk at the station (it’s not included in the video) then vending machines selling drinks and snacks ought to be provided. The excuse that the Gyle Shopping Centre is next door is unacceptable as the station will be open from very early to very late. Litter bins are also needed.

Toilets are not shown anywhere in the video. Hopefully they are provided - it would be a serious omission otherwise. Even if they are, will they be sufficient? Far too often the railway considers that one urinal and a cubicle for the gents, two cubicles for the ladies plus a single disabled toilet is sufficient. Railfuture doesn’t. 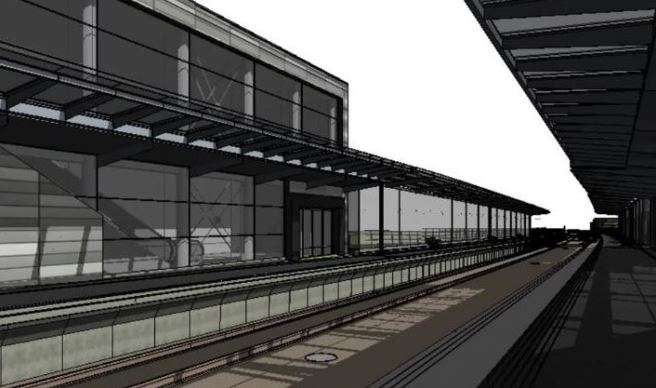 Both platforms appear to have continuous canopies stretching to the end, which is excellent. Platform seating is not shown in this video screenshot but hopefully seats will definitely be present, and plenty of them. 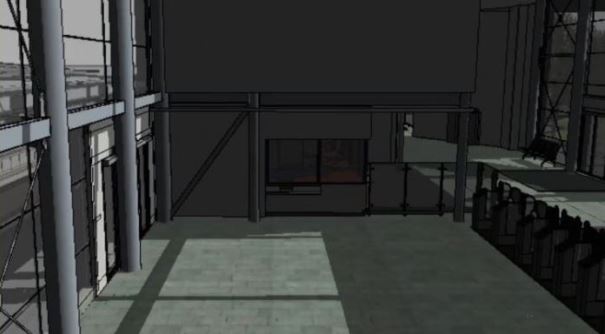 Passengers alighting from trains at Edinburgh Gateway without having a valid ticket can visit the unpaid fares window, which is integrated with the ticket office windows to allow staff to switch between windows.

Walking to and from the station 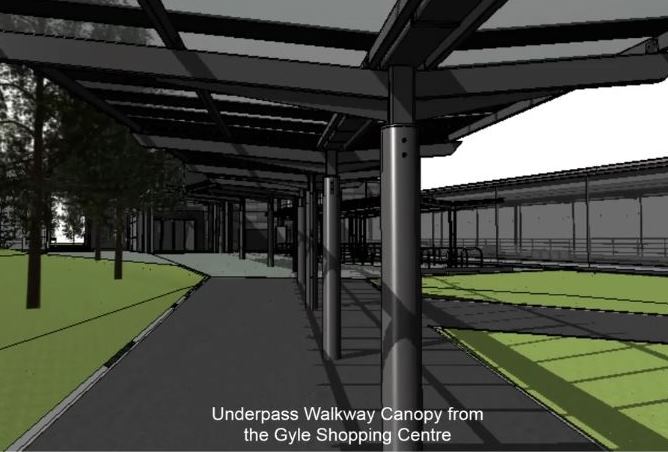 It’s rare for the train companies to consider the need to keep passengers dry once they enter their premises, never mind about the journey to and from the station. The video shows a continuous canopy along the walking route between the Gyle Shopping Centre and Edinburgh Gateway station east entrance. This is excellent, and the bicycle racks are under cover as well.

Railfuture is run entirely by volunteers and funded by its many members (click Join). It campaigns to improve the passenger experience on Britain’s railway, especially at stations and on board trains. It is particularly interested in accessibility along with innovative ideas that can be copied. Feedback can be e-mailed to feedback at railfuture.org.uk.