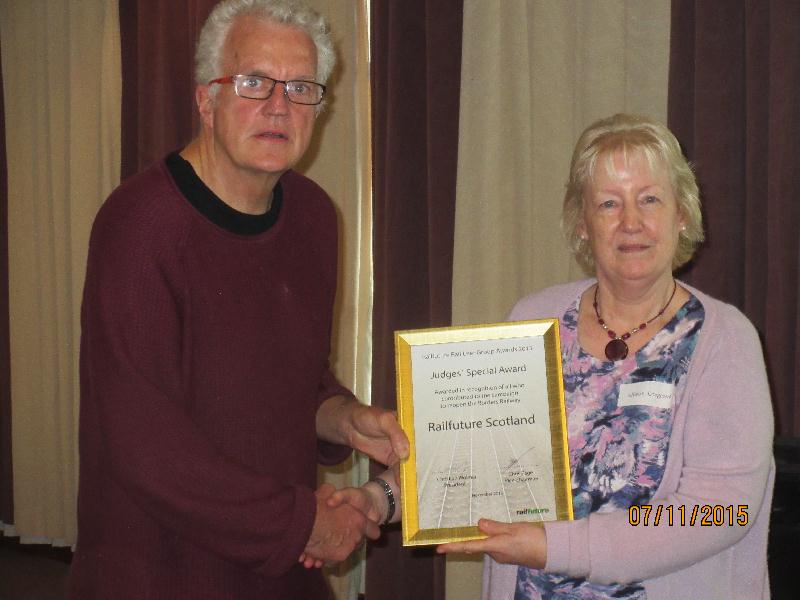 On behalf of Railfuture Scotland, Allison Cosgrove received the Judges Special Award from Railfuture President Christian Wolmar in recognition of all who contributed to the campaign to reopen the Borders Railway.

This year's Rail User Group awards were presented by Christian Wolmar, Railfuture President, to the winners at a ceremony during the Railfuture conference on 7th November in Bristol. The awards aim to recognise and reward local volunteers who come together and work tirelessly to improve their local railway and stations on behalf of their passengers. The judging panel consisted of Railfuture Vice Presidents Ian Brown, Roger Ford, Stewart Palmer, and Lorna Slade. The full list of winners is:


Gold Award: Harrogate Line Supporters Group
A successful double campaign to bring major rail improvements to Harrogate which has two aims: To increase the frequency of direct services between London and Harrogate, ultimately achieving a two-hourly service in each direction, seven days a week, and to improve services on the Leeds-York-Harrogate line, removing dated Pacer trains and increasing frequency by introducing electrification and double-tracking. There have been two major developments in both campaigns: Virgin-Stagecoach East Coast have announced new two-hourly service to and from London, and the Harrogate line has been recommended as a top priority for electrification by the government-appointed taskforce.

Silver Award: TransWilts Community Rail Partnership
which aims to transform inadequate service on Chippenham to Trowbridge line via Melksham through a substantial increase in number of daily trains: "to gain and retain an appropriate service". The judges commented that it was "an impressive achievement."


Clara Zilahi Award for best campaigner, in memory of a stalwart Railfuture campaigner who died in 2013

Commendation: Bob Morrison, Great Western Coffee Shop Forum
This is a forum-based website where (mainly) Great Western Railway customers can access over 170,000 messages to find out about travel by train in the Thames Valley, the West of England and South Wales. Members can post questions, chat about what's going on, get help with travel plans, and so on. The forum is provided by and moderated by passengers. It has significant rail industry and governmental input. Each day 60-70 messages are posted, and most are readable by any visitor to the site, whether or not they have signed up for membership.


Gold Award: Friends of the Settle and Carlisle Line quarterly newsletter
The judges said "Very informative, packed with news, and the campaigning message stands out. There's always a stunning photo on the front and back covers."

Gold Award: Abbey Flyer Users Group, which the judges described as "Clear about its aims and activities, well-designed and user-friendly."

Silver Award: TransWilts Community Rail Partnership
Connecting Wiltshire's Communities and Businesses
Judges said: "It provides easy-to-read information about using the train service, and contains clear campaigning messages and promotes the service." It also operates the www.firstgreatwestern.info discussion board, which the judges said was "Live and well-used with input from visitors."

TransWilts Community Rail Partnership for The Weymouth Wizard
The judges said it was "Effective with impressive results, and reflecting increasingly wide use of social media across the rail industry."


Railfuture Scotland for all who campaigned to reopen the Borders Railway.
Judges' comments "Our national branch in Scotland must receive this year's Special Award on behalf of all in Scotland, and beyond, who have achieved this historic campaign milestone."