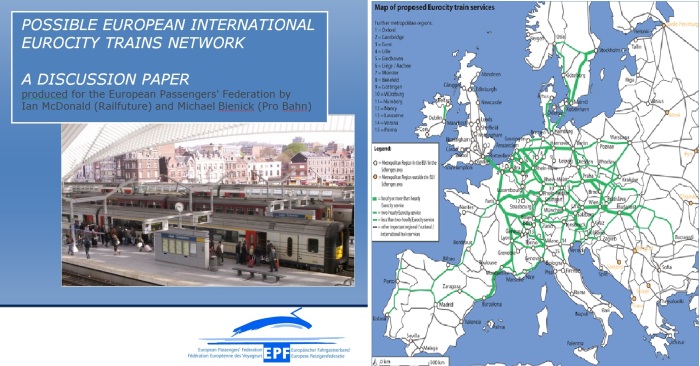 The front page and an impressive map from a discussion paper from the European Passengers’ Federation produced mainly by volunteers from Britain’s Railfuture and Germany’s Pro Bahn.

Railfuture director Jerry Alderson, who has experience of travelling by train in many European countries and three other continents, offers a personal review of a March 2015 publication by the European Passengers’ Federation (EPF) entitled “Possible European International Euro City Trains Network”.

This very impressive-looking discussion paper http://www.epf.eu/wp/wp-content/uploads/2015/03/15_02_POSSIBLE-EUROPEAN-INTERNATIONAL-EURO-CITY-TRAINS-NETWORK.pdf, was written for EPF largely by Ian McDonald of Railfuture. He had been a major contributor to Railfuture’s 2010 book “Britain’s Growing Railway”, which gave an exhaustive list of stations and lines opened (and reopened) in Britain over the last few decades. With a substantial six-page wish-list of proposed inter-city services within and crossing numerous countries, this EPF paper treads a similar path.

The well-presented and easy-to-read discussion paper is punctuated by photos of modern trains and stations but omits examples of powerful marketing that are often splashed across the liveries of those trains. Documents can easily look out-of-date so perhaps a front-cover photo of the recently completed Wien Hauptbahnhof, which has direct services as far away as Hamburg, might have been better than Liège-Guillemins station in Belgium, which opened in 2009.

It is a re-issue of a work from 2012, a fact betrayed by the failure to remove a telling sentence “the recession will not last indefinitely” during the revision. Explaining the benefit of rail services it says that Euro City “increasingly forms networks of regular-interval services where departure times, stopping patterns, and journey times are consistent, and consequently easy for passengers to memorise, and attractive for those who value regularity and frequency.” However, in 2015 where most regular travellers carry a real-time timetable for almost any passenger service on the planet why is there a need to “memorise” anything?

Apart from rightly condemning the badly-implemented border controls that unnecessarily extend end-to-end journey times, such as those on Eurostar, it seems to be calling for “more of the same”. This seems to cater mainly for people who instinctively travel by train and want to do more of it. Surely any paper promoting significant railway expansion should, as Railfuture strives to do, focus on people who still need to be persuaded to consider travelling by train. They would be captured not merely by expanding the network of routes but through providing a better proposition compared to the alternatives, creating modal shift and achieving a real step change in railway economics to create a virtuous circle that justifies further services.

The proposal seems on much firmer ground when considering the passenger experience to demand coaches that are “more modern, in which passengers can expect certain minimum standards of comfort and convenience to apply, in both first and second class.” In recent years those “minimum standards” have expanded to include Wi-Fi and power sockets for charging mobile devices, which surprisingly don’t get a single mention in the discussion paper. Other than the real basics, such as punctuality, reliability, getting a seat and price, their provision is often the most important thing when campaigning for rail improvements.

At the moment the railway has the edge over rival modes because it can offer Wi-Fi (if it wishes) However, airlines are getting in on the act. As an example, a flight by the reviewer In June 2015 on a Norwegian Airlines aeroplane from Copenhagen (eastern Denmark) to Aalborg (northern Denmark) offered Wi-Fi, albeit at a price.

The document is about a network of services but there is no point in promoting a service from A to B unless people want to use it, and without Wi-Fi not enough will, as it’s common to see at least 60% of train passengers using a smart phone at some point where a connection is available.  If you are on an aeroplane (with the recent relaxation of rules about using mobile devices) then you are only without an internet connection for, say, 90 minutes, but on a train to do the same journey you are potentially without it for four hours. That is disastrous to growing the customer base, and could actually see it shrink. The railway has to up its game just to stand still. Providing robust high-capacity Wi-Fi connections is neither easy nor cheap but it has become an essential, like power sockets. Deliver the essentials and, providing the price is right, people will clamour for the “cross-Europe network of EC train services” that the paper proposes.

This is a great piece of work, the like of only seems to be produced by voluntary groups. However, it feels like it could have been written a decade ago and hasn’t caught the spirit of the age we are now in.
Read previous articles by this writer: Government backs Wi-Fi, Cheapest fares by law?, Bring Back BR?, Public Sector Franchises, Fare Increase Viewpoint and Tube Staffing.