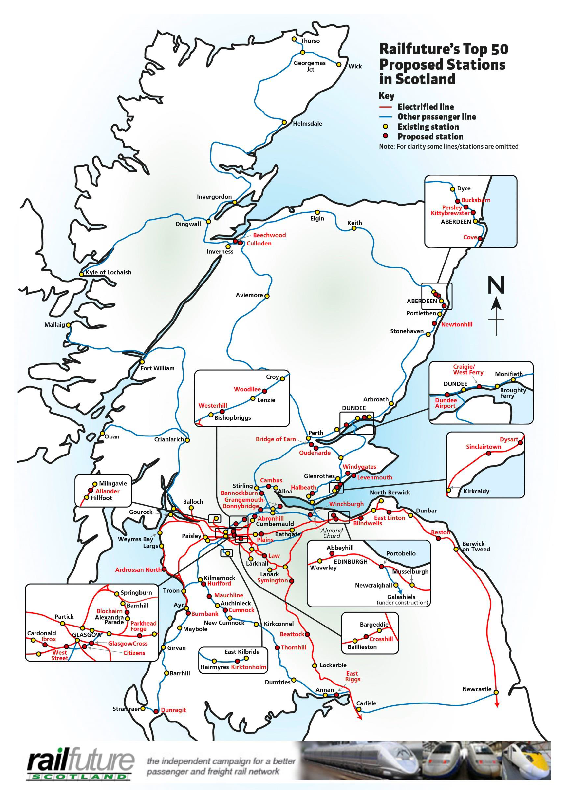 Map showing the top 50 stations that Railfuture Scotland wants to see opened (or reopened) in the next few years.

It was standing room only when Railfuture Scotland members gathered in Edinburgh to hear the "Railway Peer" Lord Faulkner of Worcester address the Scottish Autumn meeting on 15th November 2014.

His talk was entitled "From despair to hope" and covered the closure of railways pre and post Beeching, ending on a hopeful note looking at the revival of rail and the re-opening of lines and stations across the country. The accompanying slides of long-gone stations which had formerly been busy and useful additions to small towns were sad, and it was difficult to reconcile the reasoning for some of these closures, but Lord Faulkner's explanation of the underlying pressures from the road lobby, which included Government ministers and civil servants of the day, put the closures programme into context. The shameful conduct of some of those in power at the time was highlighted well and the disastrous effect their actions have had over the 50 years since the Beeching Report.

Railfuture members found this well researched and informative talk very enjoyable and Lord Faulkner answered many questions. He was thanked for making the journey from London and presented with a bottle of Glenkinchie by way of a small thank you.

Following this most instructive and interesting talk, Railfuture Scotland vice chair Roddy McDougall introduced the 50 Stations Campaign to members, giving details of Railfuture’s 50 target stations for re-opening in Scotland. Members were able to look at these in detail, discuss where their particular station was on the list and consider the viability of re-opening stations in their areas."

Full details of the Railfuture campaigns can be read at http://www.railfuturescotland.org.uk/campaigning.php

A press release following the meeting can be found at http://www.railfuture.org.uk/Press+release+15th+November+2014

Lord Faulkner's book, which he co-wrote with Chris Austin (Railfuture’s Head of Infrastructure and Networks Group) entitled “Holding the Line” can be bought online at a discount from the Railfuture shop (http://www.railfuture.org.uk/shop).