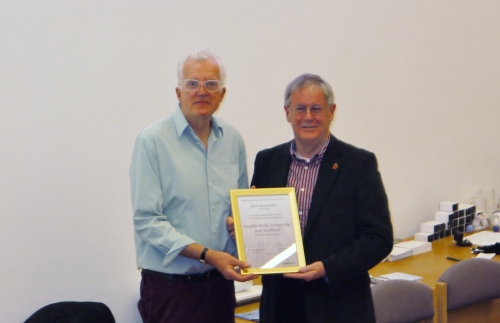 The Railfuture 2014 Rail User Group Awards were awarded on 1st November at Railfuture's annual conference in London by rail writer and Railfuture president Christian Wolmar. For this third year of the awards, nine awards were presented in categories for best website, best newsletter, best campaign, best new group, and a Judges' Special Award.

Best New Group; the Oliver Lovell Award, in memory of the Cotswold Line Promotion Group founder who died in 2013:

Railfuture's Vice-President and Awards judge Roger Ford said "Judging these awards is a great insight into the ways committed local volunteers can promote and make a real difference to their stations and services. Making these awards on a national stage recognises these achievements and encourages the continued efforts of around 300 rail user groups across the country."
Download slideshow of winners, including examples of why they won.

The RUG Awards page contains a list of the winners for each year of the awards.