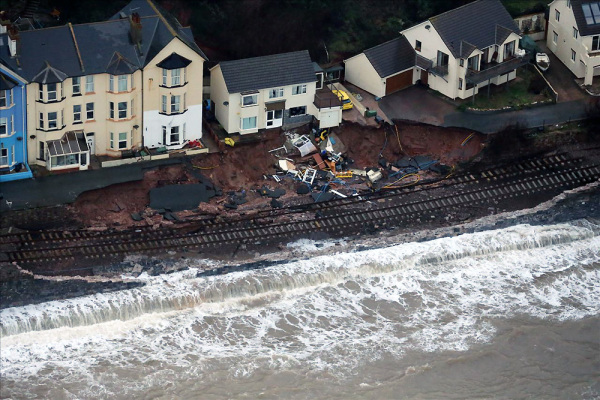 Devon, Cornwall, Somerset, Plymouth and Torbay Councils have teamed up to fight for increased rail resilience for the South-West.

Councillor Tudor Evans, leader of Plymouth City Council, called the rail line through Dawlish a 'Peruvian rope bridge' to underline the parlous state of transport serving the West Country.  'It isn’t enough to simply maintain the existing rail link, or to future-proof that link.  Plymouth along with Cornwall, Devon and Somerset deserve a 21st-Century rail link.'

The Task Force are calling for an urgent feasibility study into the best options for providing network resilience against disruption at Cowley Bridge/Stoke Canon, the Dawlish/Teignmouth seawall, and on the Somerset Levels.  They also want commitment to fund improvements to the rail service to reflect the sharp rise in passenger numbers:

Railfuture support the Peninsula Rail Task Force and call for a stakeholder conference to agree the level of service required during disruption from storm damage, flooding and planned engineering work.  The Government and ORR must then commission Network Rail to plan alternative routes to ensure continuous availability of a rail route to serve the South West, and commit to funding implementation of that solution.

Please register your support for the Railfuture campaign for rail network resilience in the south-west.