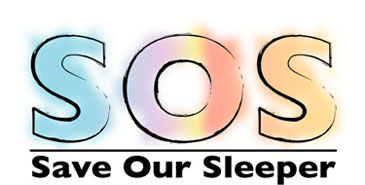 The Save Our Sleeper campaign group is organising a public meeting at the Eden Project later this month.

Christian Wolmar of Rail Magazine will be guest speaker at the meeting at 14.30 on Sunday 27 November 2005.

Railfuture's Stuart Walker will also be speaking about Cornwall's other rail services - both the successes and threats.

Supporters of the threatened London-Penzance sleeper train are
being urged to attend the meeting and get involved in efforts to secure and develop the service.

"Now we need anyone who has time to spare to help us get this group off to a flying start,” said Mr Roden: “If you value this service, and want to help us secure its future, we will welcome you with open arms at Eden.”

Even before its launch, the group has won backing from one of Britain’s leading transport commentators, Christian Wolmar, whose controversial new book on the railways’ privatisation, On the Wrong Line, is out now.

Mr Wolmar said: "The campaign against the closure of the sleeper service is vital for two reasons.

"First, it is highlighting the stealth cuts being made across the railway network which are being carried out with no assessment of the value of these services to local communities.

“Secondly, it is demonstrating the importance of the sleeper service to the West Country, an area ill-served by alternative forms of transport.

"The campaign has all the hallmarks of the Deerstalker Express campaign of a decade ago and I hope it meets with the same success."

Mr Wolmar will be joined at the Eden Project by, among others, Falmouth and Camborne MP Julia Goldsworthy, who has worked extensively for the service’s retention.

Other supporters include the former Governor of the Bank of England, Lord (Eddie) George, leading hotelier Olga Polizzi, who runs the Hotel Tresanton in St Mawes, and the explorer Robin Hanbury-Tenison, all of whom joined campaigners to present a 3,600-name petition at 10 Downing Street on
September 14.

Mr Roden added: “If you’d like to come and show your support, come down to Eden and make a day of it. If you can let me know beforehand at andrew at saveoursleeper.com or on 07973 155109 if you’re coming, that’ll mean we can ensure there’s enough seats for everyone!”

The Strategic Rail Authority wants bidders for the Greater Western rail franchise, which starts next April, to cost options for withdrawal of the sleeper train, and of running it separately.

The current operator of the sleeper service is First Great Western, which runs main line services from London Paddington to South Wales, the West Country, and the South West.

National Express, First Group, and Stagecoach have been shortlisted to operate it. The winner is expected to be
announced in December this year.

The Save Our Sleeper online petition is at www.saveoursleeper.com

It has already attracted more than 3,600 signatures, and was presented at 10 Downing Street in September.

Save Our Sleeper is modelled on the success of similar groups such as Friends of the Settle-Carlisle Line, which saved the route and has developed and improved services.