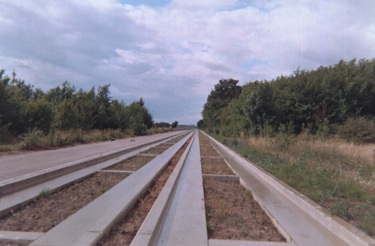 Busway block at Histon. This was once a double-track main line railway with a goods loop. It should be a strategic rail link between Cambridge and the East Coast main line not a busway. Picture: Steve Wilkinson

The opening of the Cambridgeshire guided bus system – which was built after an existing railway was ripped up to make way for it – has been delayed for the third time.

Plans to launch it in February, mid-summer, and then November 2009 have been put back indefinitely – probably until next year.

The busway has been pushed through by Cambridgeshire County Council with cash handouts from the Government in the face of overwhelming public opposition – and warnings from professionals about the viability of the scheme.

Tim Phillips is chairman of CAST.IRON, which campaigned for the railway to be reopened and was the principal objector at the public inquiry into the scheme, which is now expected to cost £150million.

He said: "By the time the scheme is fully completed as far as Trumpington park and ride and Addenbrookes Hospital, it is likely to be three to four years late and will probably have cost over three times as much as the figure used to promote it to the public in 2003.

"Incredibly, despite all this time and money, the journey from Cambridge city centre to St Ives centre will be longer via the busway, both in terms of time and of distance.”

For some reason, the Government had demanded a “rapid transit” scheme should be in place before a new town was built at Northstowe by a private company, Gallagher Estates.

For information on another of Gallagher Estate’s projects:
Orchard Park

It is possible that the railway line was wrecked because a government select committee stated in 2000 that it wanted to see bus-based “demonstration schemes” to compare costs with tram or rail based options.

But the railway industry, fragmented by privatisation, also failed to make a case for the reopening of the mothballed but viable railway. It was left to volunteer campaigners and members of the public to fight the busway.

Currently no construction work is taking place at Northstowe, and the price of the busway has gone way over the cost of reopening the railway which would have brought much wider social and economic benefits.

A similar rail route at Ebbw Vale was reopened for £30million, while the Association of Train Operating Companies costed reinstatement of the 12-mile March-Wisbech line in Cambridgeshire at £12million.

"At every level and in every detail, the misguided bus scheme has been a failure so far, so its prospects for operational success are slim,” said Mr Phillips.

“I firmly believe its promoters will be forced into ever higher levels of spin and hype to claim the system is viable.

"In the absence of industry support, CAST.IRON may have failed to win the case for rail – but we are not going to let the forces of political and career ambition disguise the truth behind the busway's eventual operation."

Professor Lewis Lesley of Trampower has also reported that in 2005 he offered to convert the rail line into a light rail line, extend it as a tramway though Cambridge and supply the trams for £65million. He received no reply from the chairman of Cambridgeshire County Council's transport committee.

Cost:
£65million, advertised during the “consultation” period; £86million, as given to the inspector at the public inquiry in 2004; £116million, approved by the Government after the inquiry; £150million, current estimate. Final cost: Will anyone ever tell us?

Opening date:
Spring 2009, claimed at the inquiry; November 2009, first stage to open; 2010 possibly, to Addenbrookes; 2011 possibly, to Trumpington. Promoters Cambridgeshire County Council promised the whole scheme would be opened at the same time.

It was claimed at the inquiry that there would be four operators on the busway. It is now reported that there will be two operators, Stagecoach and Whippet.

It was claimed at the inquiry that there would be one ticket and one price. It is now reported that the operators will have separate tickets (not valid on the rival’s buses) and at different prices.

It was claimed at the inquiry that the service frequency at Science Park would be up to 20 buses per hour (every three minutes). It is now reported that there will be three per hour (every 20 minutes).

In the run-up to the public inquiry, there were four letters of support for the busway and 2,741 written objections.

If the railway had been kept, the journey time from St Ives to London would have been 70 minutes. With the guided bus it will be 100 minutes. The railway could have taken freight. The busway does not.

The capacity of a bus is 70 passengers, while a four-car train can carry 240 people.

At the public inquiry it was claimed that there would be a heated waiting room at St Ives and at Longstanton. At the opening there will be one unheated bus shelter at each location.

Building the busway has caused months of road works resulting in major delays, congestion and loss of earnings for road users.

No compensation has been offered to businesses affected in Histon/lmpington and elsewhere where road traffic was diverted over many weeks.

CAST.IRON (the Cambridge And ST Ives Railway OrganisatioN) will be monitoring conventional and guided journey times and passenger numbers regularly once the busway is open.

Look what CAST.IRON told the public in 2004 at Spot the difference

Email chairman at castiron.org.uk during office hours in the first instance for all communications (include a direct telephone number) or call 07768 845950.