Latest News: In the past few days we'\ve had the announcement that we've been waiting for. The Ferryhill Station project has been awarded money from the Restoring Your Railway Fund. This will allow for development of the business case to provide a firm foundatio9n for future grant applications.

Ferryhill Station still exists on road signs. What we need now is an actual station to serve the many potential passengers
The Railfuture North East campaign argues for the construction of a new station at the point where the Middelham road bridge crosses all 4 current lines, as well as the line to the limeworks. A northbound mainline platform will be required, an island platform with two faces will serve the southbound mainline and the northbound Leamside line, finally a third platform will service the southbound Leamside line. Existing pointwork to the south of our proposed new station site already allows a connection between the ECML and the Leamside lines, albeit with a speed restriction.

The new station could be served by the existing TransPennine Express services to and from Manchester Airport. This service could also provide local connections to and from Durham, Newcastle and Darlington. Options could also exist in the longer term to provide a new local service from Darlington to Newcastle and the North via the ECML, or the Leamside Line, and the new Tees – Tyne passenger service via the Stillington freight line [see our pages here and here proposing developing these lines for passenger services]. Ferryhill’s population is 11,656 with 45,000 living within a 4-mile radius at locations such as Middlestone Moor, Kirk Merrington, Tudhoe, Chilton, Cornforth, Bishop Middleham, Mainsforth and Sedgefield (population figures from 2011 census). These areas would benefit from significant economic regeneration through the new station.

Paul Howell, the recently elected Conservative MP for Sedgefield, asked to meet with the North East Branch of RailFuture. He was particularly in interested to get our views on the Government’s willingness to consider some reopening of rail lines originally closed under the 1963 Beeching Plan including the Leamside route from Ferryhill to Pelaw. Paul was particularly interested in flagging up the need for a new station at Ferryhill saying that a surprising number of local constituents had mentioned the need for this to him. Our representatives, Keith Simpson and Tony Walker, rehearsed some of the reasons in support of the project, such as the fairly large catchment area a new station would serve, plus the fact that it would greatly aid people wanting to travel north not only from Ferryhill itself, but from the likes of Spennymoor and Bishop Auckland. And if Northern did eventually deliver on the original franchise promise to deliver a new ‘connect’ service between Middlesbrough, Newcastle and Carlisle, and that service was routed via Stillington, then the business case for Ferryhill station would be further enhanced.

A local group, who can be found at https://www.facebook.com/groups/ferryhill have started their own campaign and are enthusiastically supporting a petition to Durham County Council that reads:
“We the undersigned petition the Council to Prioritise the re-opening of Ferryhill Railway Station and the Leamside Line within the Council's regeneration and travel policies.The Railway Station at Ferryhill has been closed for a number of years. Ferryhill sits on a number of rail lines including the Stillington Line which could be used to travel south into Teesside. The Leamside Line has been mothballed but if put back in use would provide travel north and possibly link to the Metro Line in Tyneside. This Rail link would provide cleaner transport across the County”. It appears that the petition, organised by local independent councillors but with cross party support, has been a considerable success. Over 3,500 people signed the petition and, just as importantly, it has raised the profile of the whole idea.

The Department for Transport announced the £500m Restoring Your Railway Fund in January 2020 to enable opportunities to reinstate railway services and add new railway stations to the railway network. The fund has been split into three funding pots that support proposals that are at different stages of their development. Some media organisations have dubbed it the Reverse Beeching fund. The Restoring Your Railway Fund has been split into three funds to support projects that are at different stages of development. Applications to the ideas fund deal with projects that are at an early stage of development and requiring support to develop an initial business case. The successful applicants must have a proposal that restores railway services to communities that are not connected on the railway network. Examples include restoring railway services on freight lines, disused formations or creating new alignments that run parallel to previous corridors. The fund provides, for successful proposals, up to £50k for to fund the transport and economic studies that will support an initial business case. The formal guidance says that the Ideas Fund is to be “used to restore rail services (other than rail station creation or restoration)” - but the good news is that “Ferryhill Restoration” has been included as one of the 50 successful bids announced in July, and we are assuming that this refers to Ferryhill Station as opposed to the project to restore the Leamside Line. The 50 proposals now go to an expert panel who will announce their decision by the end of the summer. 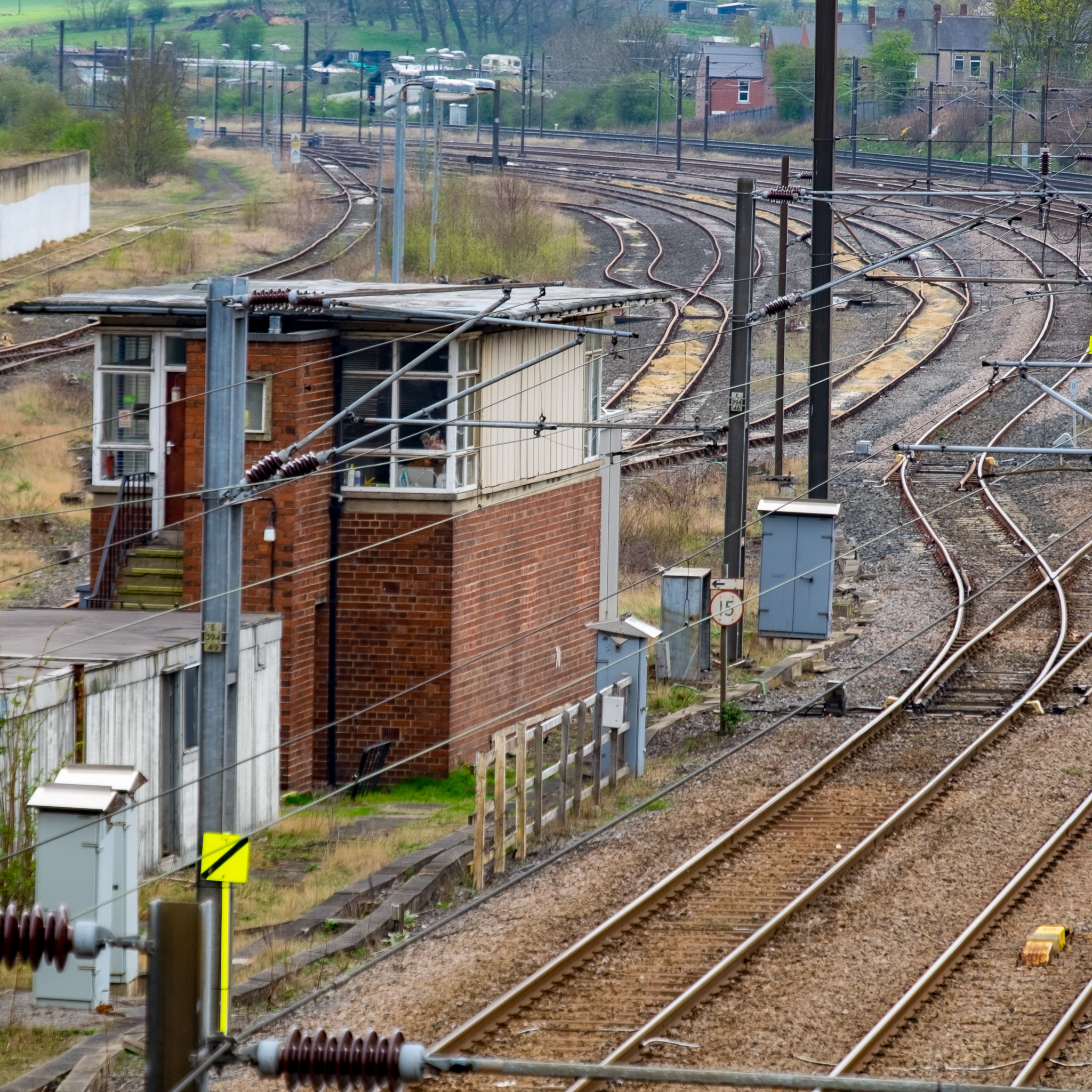 Ferryhill Signal Box
But there are problems. We know that there are already proposals to add additional services between London and Edinburgh and this, coupled with additional demands in the future arising from both HS2 and Northern Powerhouse Rail, won’t be possible without substantial additional capacity being added to the ECML. These additional fast services could make it very difficult to find paths for the slower trains that would be needed to provide a range of destinations from a new Ferryhill Station. The good news is that Network rail have published a study exploring how to increase capacity between York and Newcastle. It would be nearly impossible to add two further tracks alongside the current ECML and so attention has turned to using alternative alignments to increase capacity. One of their proposals is to re-route slow freight trains via Northallerton, Stockton and then via the Stillington Line to emerge on the ECML at Ferryhill and also open all, or part of, the Leamside Line. However, there don’t seem to be any proposals in the document to open the Stillington line for passenger and the proposals for the Leamside line may be limited to making use of only a short section before rejoining the ECML to the North of Durham. Re-opening both these lines for passenger services may well be needed to ensure that a new Ferryhill station is viable and has a good service to as many destinations as possible.

The North East Joint Transport Committee is made up of Councillors from Northumberland, Tyne and Wear, and Durham. They have recently produced a draft of a plan for the whole of their area that covers the period to 2035. The plan covers all roads, buses, ferries and rail transport but this website is particularly interested in the sections on rail. Re-opening Ferryhill Station is in the section headed “Schemes for development and delivery in the next ten years” with a note attached saying that delivery of the schemes in this section can commence at short notice. What is also important in this context is the plan to re-open the whole of Leamside Line – a plan that has also been adopted by Transport for the North. Re-opening Leamside and, if possible Stillington, will open up many more destinations that can be directly served from a re-opened Ferryhill Station – and will help make the whole project much more financially attractive. Whilst it is important to note that the money to actually nbuilkd the new station has not yet been identified it has to be good news that the project now has regional backing.