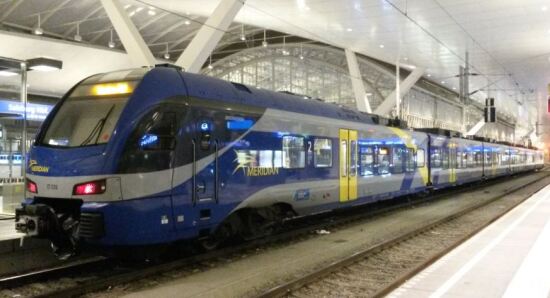 Railfuture campaigns for a bigger and better railway in Britain – one that is modern, innovative, welcoming and meets the growing expectations of passengers. There are a mountain of ideas that can be emulated from railways around the world. Salzburg provides a good starting point.
Railfuture campaigns to improve the railway in Britain for passengers and freight, and it has a broad range of campaigns such as new stations , later and more frequent services, improved accessibility, better station and on-board facilitates and so on. With a focus on promoting international best practice throughout its campaigning, Railfuture looks to see what happens in other countries.

Railfuture director Jerry Alderson has spent a lot of time working around the world, including much of the last three years in Vienna. The capital city makes up a quarter of the population of Austria, which is sparsely populated but still has a high-quality railway that is amongst the best in Europe. Following a recent trip by rail to Salzburg, he describes some ideas that we could perhaps take from the Austrians and replicate in Britain.

This article looks just at stations.

At the Main Station in Salzburg

At Salzburg Hauptbahnhof there is a large CIS screen not too far off the ground and beneath it a diagram showing where each platform is located (including which end of the platform for the train). Passengers know exactly where to go.

This Ticket Vending Machine (TVM) outside Salzburg Hauptbahnhof has a computer screen than supports several languages, has an easy-to-follow top-to-bottom process to follow and has both braille and tactile lettering for those with limited or no vision.

The stair rail from the platform down to the concourse has tactile information showing other platforms and station exits along with braille. This is common in Vienna as well.

Screens on the platforms at Salzburg Hauptbahnhof show details of the next few trains at that platform so that passengers will know precisely where to stand to board their booked carriage or first/second class, or the buffet car or the disabled access area. This reduces dwell time and avoids people having to walk through carriages. There are multiple screens on each platform and each shows a red dot  where the person is standing (standort).

One the Meridian trains leaving Salzburg for Munich fare evasion and on-board ticket checking is reduced by locking all train doors except one, so that all passengers have their tickets checked as they board. This is possible at Salzburg because the train to Munich starts there so there is plenty of time for people to board. It is not a practical approach at intermediate stations.

At Salzburg Hauptbahnhof station (like Copenhagen Central station, for example) fixed overhead rods are used to provide power to trains rather than wires. The longevity and resilience of the rods are much higher than with wires.

At Salzburg Sam station the waiting room entrance has with staggered doors to try to prevent the wind rushing through and therefore resulting in a less cold waiting room.

In Britain there’s a tendency to reduce costs by providing just one set of stairs, one lift and one station entrance with one CIS screen. At Salzburg Gnigl station a major road goes over the top of the railway line and the platforms.  As there are trolley bus stops (note the overhead wires but absence of tram tracks) on either side of the road it makes complete sense to have station entrances on both sides of the road as well. Once can imagine that in Britain there would be a pedestrian crossing on the road.

At Salzburg Gnigl the real-time train display is built into the illuminated station sign reducing the number of things that need supports and electricity connections. It’s just one example of a single piece of equipment having multiple functions.

Out in the sticks

The very remote rural request-stop at Anthering, less than 30 minutes outside the city, has a superb covered bicycle park that Britons could only dream of. There are 15 bicycles there but there’s only one car parked. Passengers press a button to request a train to stop no more than five minutes in advance. This means than trains do not have to slow down to look for a passenger holding their arm out as is the case in Britain.

The above are just a few examples where Salzburg seems to have been more innovative and passenger focused than is typically the case with Britain’s railway.