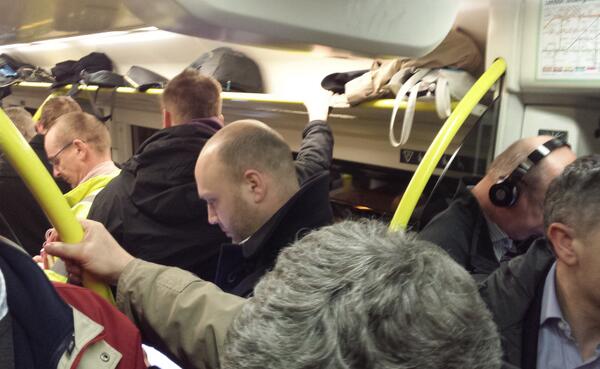 Hard-pressed commuters across northern England would get 44 modern Southern diesel carriages to relieve crowding as soon as two short routes in Kent and East Sussex are electrified.

The 25-mile MarshLink route will be electrified within the next five years or so as part of Network Rail's comprehensive upgrade so that Southeastern Highspeed services can be extended off HS1 from Ashford International to Bexhill via Rye and Hastings. That will release 12 diesel Turbostar carriages, of the same type as taken recently by Chiltern Railways from already-crowded TransPennine Express services.

Before that, 32 Turbostar carriages could be released to congested northern routes IF the government announces funding in this year's Autumn Statement to electrify the 24-mile Uckfield branch. The new Thameslink Southern Great Northern franchise requires longer Uckfield line trains to operate from December 2016 to provide sorely-needed extra capacity on this fast-growing route leading into East Croydon and London Bridge. However at their presentation to stakeholders on 10th July, Govia Thameslink were only able to say that "additional capacity will be provided as soon as possible to relieve crowding on the busy Uckfield route. Timing will depend on when suitable diesel rolling stock becomes available (likely to be after electrification elsewhere in the UK)."

This would require 14 extra diesel carriages to come from northern routes after their electrification, from regions which need to keep those trains for growth elsewhere on their own networks. Yet electrifying the 36 miles of track of the Uckfield line is a higher-value long-term infrastructure investment than the mere platform-lengthening currently planned for longer diesel trains, that will release the 46 diesel vehicles that would otherwise be required (a better ratio than most other electrification schemes that have been proposed) to relieve overcrowding in the north

The dilemma for the DfT and Network Rail is whether to electrify AC or DC. AC overhead is the strategic choice because energy losses are lower, but DC third rail, like the rest of the Southern network, is cheaper to install and can be delivered quicker without diverting overhead electrification teams working on major projects, and compatible electric trains continue to roll off Derby production lines every week. Govia are committed to releasing 100 DC electric vehicles during the franchise - as these will be older vehicles which are unlikely to find a use elsewhere, no additional electric trains would be needed for the Uckfield line.

Whilst the DfT and NR can only argue about the type of electrification to Uckfield and no-one knows when or from where any extra diesel carriages will come, then southern commuters will continue to lose out waiting and northern commuters also face losing out yet again with a repeat of the anger when 18 of their TransPennine carriages were transferred to Chiltern.

Railfuture is calling on the Chancellor and the Transport Secretary, still fresh from his March commitment to electrify MarshLink for 'Highspeed Hastings', to commit funding this autumn to electrify the Uckfield line and send the modern and recently-refurbished diesels north. That way commuting constituents benefit whether they're in the Home or provincial counties and cities.

If you live in one of the parliamentary constituencies through which the Uckfield line runs and support this goal, please write now to both your MP and your 2015 election candidates to press the need for electrification - their contact details are here.