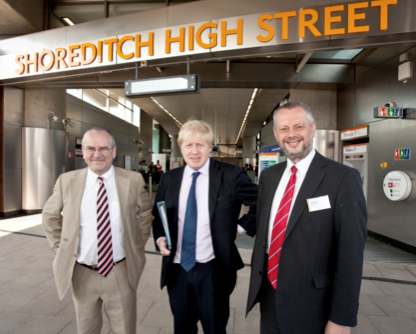 Ian Brown CBE FCILT, right, with Commissioner of Transport for London Sir Peter Hendy, left, and Mayor of London Boris Johnson, at the opening of Shoreditch High Street station in 2010.

In a career spanning over 40 years, Ian Brown has made an outstanding contribution to public transport and the rail industry. His achievements include transformation of the Docklands Light Railway, establishment of London Overground, the major extension of the East London Line, the integration of Croydon Tramlink into TfL and the expansion of Oyster pay as you go to all National Rail stations in Greater London.

The photo shows Ian Brown in front of one of the tunnel boring machines (TBM) that were used to construct Crossrail, a project that he was heavily involved with promoting. 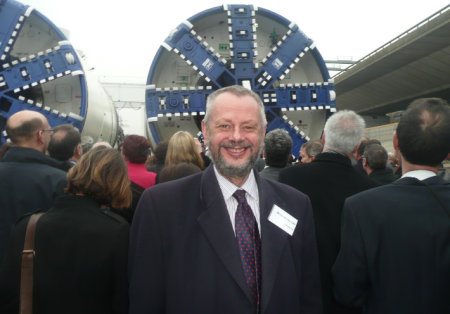 He began his career as a graduate trainee with British Rail. Highlights of his career include the BR policy unit, managing director of Railfreight Distribution, policy adviser to SNCF, and chief passenger manager at London Midland region.

After 10 years in the role, he retired as Managing Director of Transport for London's - London Rail in 2011, and was honoured with a CBE in the 2011 New Year Honour list for services to the railway industry.

Ian was appointed a Vice President of Railfuture in May 2012 and has become a regular and popular contributor to Railwatch magazine.

In May 2014 Ian was elected to the National Board of Directors of Railfuture and held the role of Director of Policy for three years until his term ended in May 2017. He has been, and still remains, instrumental in determining Railfuture's policies at a strategic level and has written several of its submissions to the Department for Transport.

He says "Railfuture is being listened to as one of the few organisations organised at the national level for such stakeholder consultation but, importantly, can tap into our roots through the branches throughout the country so understanding what issues are of concern and relevant to our members and indeed the users of the rail network."

Ian Brown's articles on this web-site include Response to Shaw Report.

He also introduced Railfuture's 'Go and Compare!' feature to identify International Best Practice so that Railfuture's campaign for a bigger and better railway can make use of the knowledge obtained.

Ian is also a regular writer for France's Le Rail magazine, where he is credited as Directeur Stratégie de Railfuture. These artciles include: