A Station Back in Skelmersdale 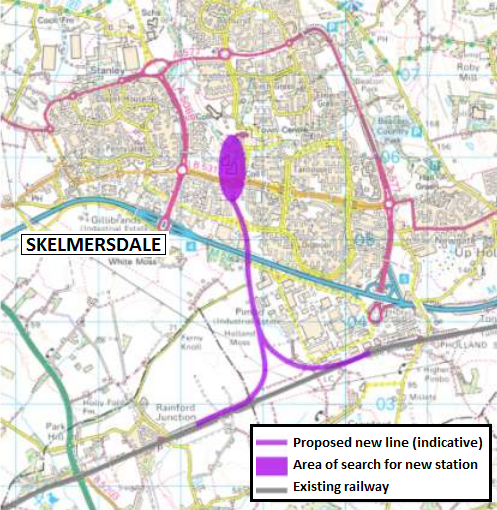 A key campaign aim of Railfuture North West England branch is the construction of a new line and station in Skelmersdale in Lancashire. The previous Skelmersdale station was closed in 1956; just five years later Skelmersdale was designated as a New Town!

Skelmersdale is currently the largest town in North-West England without a railway station. Whilst it has a good road network, the level of car ownership is low and bus services are poor. The nearby stations of Upholland and Rainford on the Kirkby - Wigan line have little or no car parking, no connecting bus services, and no direct service to the closest employment centre of Liverpool. It should therefore be no surprise that youth unemployment in the area is above average. The effect of the lack of public transport is described starkly in this article.

In December 2012 a Merseytravel report proposed that an infrastructure study be undertaken by Network Rail in conjunction with local councils to define the scope of the project.

We believe that opening a new rail station in Skelmersdale would provide access to education and jobs, help to improve the local economy, and would be relatively easy to achieve. We have already written to Lancashire County Council to express our support for the plans they have for a station here in the West Lancashire Masterplan page 29.

We have also written to Merseytravel as we think that the plans should include an extension of the electric services from Kirkby and also to the MP for West Lancashire, Rosie Cooper.

On 1st August 2014 Merseytravel published their Long Term Rail Strategy and this includes proposals for a spur to and station in Skelmersdale. The detail of the proposal is on page 25.

In 2015 Network Rail's estimate for the GRIP3 work was £4 million. The proposed timescale was:
On 1st June 2015 Lancashire County Council approved £1m funding towards the GRIP3 evaluation of how a rail link to Skelmersdale could be constructed with a station in the town centre, whilst in April 2016 it was reported that Lancashire County Council will invest £4.7m into the project over the next two years. This will be progressed through GRIP stage 3 (Governance for Railway Investment Projects, Option Selection) with Network Rail and Merseytravel.

Lancashire County Council Cabinet Member for Highways and Transport John Fillis said: “Our plans to deliver a railway station for Skelmersdale are on track. Our ambition is for the proposed station to provide direct access to Liverpool, with two trains an hour, along with an hourly service to Manchester. We feel that the best route for funding the rail link and associated improvements would be through a Growth Deal, of the type which has been so successful in other parts of the county.”

In September 2017 Merseytravel confirmed that it will be contributing up to £765,000, adding to £4.32m already set aside by Lancashire County Council, for a GRIP 3A study which will identify in more detail the proposed route and the technical solutions to delivering both a new station at Headbolt Lane in the Northwood area of Kirkby, and for a new railway branch line from Rainford to Skelmersdale town centre. Merseyrail electric services will be extended beyond Kirkby to Skelmersdale, where they will connect with Northern services from Wigan diverted from Kirkby. This is now expected to conclude in late 2020. 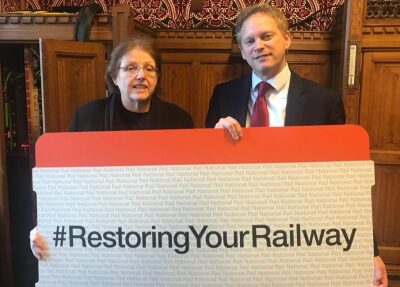 In March 2020 West Lancashire MP Rosie Cooper received further assurances from the Department for Transport over the commitment to delivering Skelmersdale Railway.

In June 2020 Lancashire County Council approved the acquisition of the ex-Skelmersdale College for £1 to create the long-awaited public transport link for the town. A further £2m was allocated to demolish the buildings and cover any additional costs of preparing the location to be developed into the train station.

In August 2020 it was reported that work on the scheme could be “accelerated” under a new funding application.

In December 2020 it was reported that Lancashire County Council is expected to present its business case for a new Skelmersdale rail station in the first few months of 2021.

In December 2021 planning permission was granted for a new station at Headbolt Lane, to which Merseyrail services are expected to extended using battery technology, as the first step toward an extension to Skelmersdale.