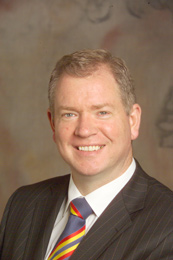 Tom Harris is a former Labour MP for Glasgow South.

He was born in Beith, Ayrshire in 1964, the son of a lorry driver and an office clerk..

He worked as staff writer on Business Scotland magazine before joining the staff of the East Kilbride News (1986-1988) and then the Paisley Daily Express (1988-1990).

In 1990 he became the Labour Party’s first full-time press and publicity officer in Scotland, based at Keir Hardie House in Glasgow. In the following two years Tom worked closely with Donald Dewar as well as with John Smith, Gordon Brown, Robin Cook, Tony Blair and a succession of Shadow Cabinet members.

He became a member of the Science and Technology Select Committee before becoming Parliamentary Private Secretary to John Spellar, Minister of State for Northern Ireland, in July 2003. In this period he was instrumental in making light pollution a statutory nuisance for the first time, and for introducing tougher sentences for computer hacking.

In 2006, Tony Blair appointed him as Parliamentary Under-Secretary of State for Transport with responsibility for the rail network. Ten months later, when Gordon Brown became Prime Minister, he re-appointed Tom to the Department for Transport (DfT) with an expanded portfolio which included the trunk road network.

Tom is married to Carolyn with whom he has two sons. He has an older son from his first marriage.