MAYORAL FORUM ON TRANSPORT TO THROW DOWN CHALLENGE ON POLLUTION


Mayoral candidates will be challenged on how they propose to tackle the growing problem of air pollution caused by transport in our streets next month, in a Forum being staged by the West Midlands branch of Railfuture and Birmingham Friends of the Earth.

"Again and again the EU and other bodies have warned about the very high level of pollutants present in the air we breathe resulting in a growing number of premature deaths" said William Whiting, chair of the Midlands branch of Railfuture. "What we need to know is how we are going to tackle this and in particular what policies the mayoral candidates have to address this growing crisis"

"Unlike previous hustings that have questioned candidates on a variety of issues our Forum is dedicated solely to transport within the region, so we can look for more detailed answers than usual " added Stuart Minal for Birmingham Friends of the Earth. "The creation of a regional mayor gives us an opportunity for a regional solution to improve the air we breathe. This Forum gives us a unique chance to sound out the candidates on their approach to this"


CYCLING IS A DISASTER AREA IN THE WEST MIDLANDS. IS IT TIME FOR OUR VERSION OF BORIS BIKES?

This is just one of the questions to be put to Mayoral candidates on April 6th at the Transport Forum being staged by the West Midlands branch of Railfuture and Birmingham Friends of the Earth.

"There is clearly a feeling that the region`s local authorities are only paying lip service to the needs of cyclists", said William Whiting, chair of the West Midlands branch of Railfuture. "Cycling lanes that end up nowhere, or a lane marked by a white line which is then used to park cars. Take up remains poor, just look at the empty cycle sheds outside the cross city rail stations. Contrast what London has done, driven by its mayor".

"We will be asking what our mayoral candidates are going to do to prioritise the bicycle" said Stuart Minal of Birmingham Friends of the Earth. "What about our version of the so called Boris Bike for use in our urban centres? In embracing such an initiative the new mayor could be immortilised."

The forum Keeping The West Midlands Moving will take place on Thursday, 6th April 2017 from 6pm, in the Banqueting Suite, Birmingham Council House. On the panel will be the five main candidates for Mayor of the West Midlands; James Burn (Green), Peter Durnell (UKIP), Beverley Nielsen (Lib Dem), Sion Simon (Labour) and Andy Street (Conservative). It will be chaired by Lorna Slade, editor of Rail Professional and a Vice President of Railfuture.

Admission is free (and includes free refreshments on arrival) but must be pre-booked either over the internet www.keepwestmidlandsmoving.eventbrite.com or by phoning 0121 475 4005. 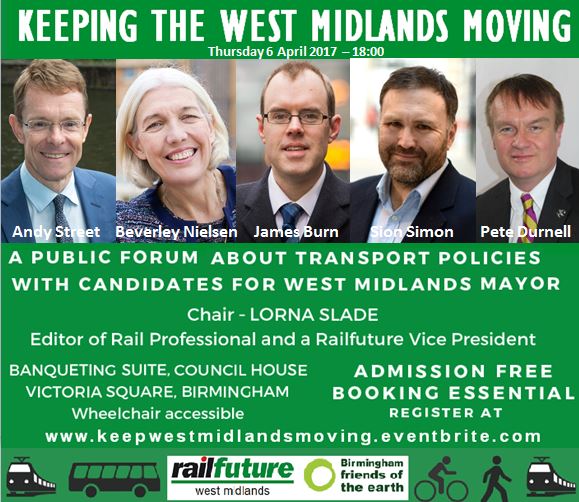 Birmingham Friends of the Earth is the only group in Birmingham campaigning on issues including waste, energy, biodiversity, transport and air quality. They hold campaign meetings open to all every Monday at 7.30pm. For more information see www.birminghamfoe.org.uk