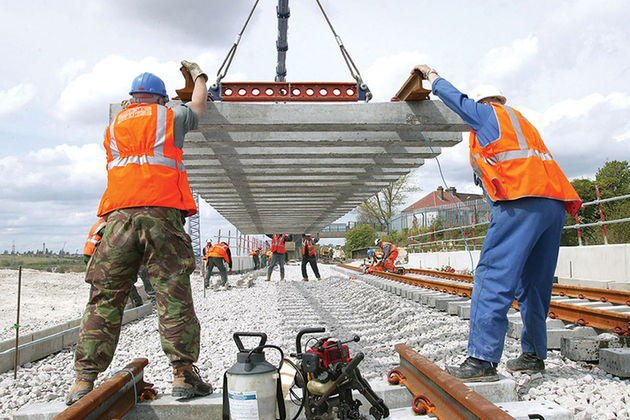 The Government announced yesterday that the Network Rail development programme for the current control period will be cut back so that it can get back on track and be delivered within the £38Bn budget.

The announcement comes as no surprise - although Crossrail and the redevelopment of Reading station are on schedule and within budget, it is well known that other more recent projects such as Great Western and Northern Triangle electrification are running late and over budget.

The main reason that projects are slipping is a shortage of people with the right experience and skills, particularly project management, electrification, signalling and tunnelling. This is the inevitable consequence of trying to rapidly ramp up the the volume of work to be done in a specialist industry. Costs are rising because rail projects are effectively bidding against each other for that limited pool of skilled resources. The fault lies with previous governments of all colours which for half a century failed to recognise the importance of rail transport to the British economy and so failed to invest in maintaining and increasing the resilience and capacity of the network, thus reducing the pool of skilled resources - and then when the importance of rail was recognised, expecting that the development tap could be turned full on immediately. A sustained investment programme is needed to maintain the pool of resources.

However, the goverment is right to reset the programme to what is achievable with the available resources. Railfuture consider that Network Rail, Transport for London, HS2 and their contractors must also commit to providing training to increase the availability of skilled resources, and be more open to using people with transferable skills but without rail experience.

Rail is a safety-critical industry. This has generated a risk-averse culture in Network Rail, which is necessary at the operational level, but is counter-productive at the business level - whilst project teams are fired up to deliver, they are stifled by senior management which takes a long time to make decisions (which are then frequently revisited), so it takes a long time to get anything done. Network Rail needs a more mature attitude to safety and risk, so that safety becomes primarily an individual and team (not management) responsibility, and risks are identified and managed rather than agonised over.

Now for the good news: the goverment has appointed Sir Peter Hendy as the new chairman of Network Rail. Sir Peter has a track record with Transport for London of aligning stakeholders and gaining concensus among politicians in support of transport solutions - experience which will help to gain approval at all political levels for the major programmes which are planned. Mark Carne, who was appointed last year as Chief Executive of Network Rail, has a track record of delivery with Shell Oil, another safety-critical industry which has developed a mature attitude to safety and risk. To date he has appeared to focus on evangelising 'The Digital Railway', which whilst essential to reduce cost and improve performance, is a long term goal; to achieve a short term impact on cost and performance, going forward he must focus on changing the culture of Network Rail.

The government has already identified some key projects which will be shelved (ie delayed but not dropped):
but Great Western electrification and faster trains for Norwich will continue, and the budget has not been cut - it remains at £38Bn. Therefore it is lack of resources, not lack of funding, which will determine how many of the projects to which Network Rail has committed can be achieved within the Control Period (2014 - 2019) timescale. Network Rail and ORR will now review the whole development programme for Control Period 5 to decide which other projects will be delayed, and will report in the autumn.

Railfuture's Policy Group is currently reviewing the principles which should be applied to define the relative priority of projects within the programme, so that we can put our view to Network Rail and ORR. The knee-jerk reaction will be to focus on the core commitments, which we will resist; the government has already recognised this by delaying MML electrification. These principles may include:
One of the consequences of the delay in electrification projects is that more diesel trains will be needed to accommodate the growth in passenger numbers on non-electrified lines. The prospects for Vivarail's D-Train now look even better!