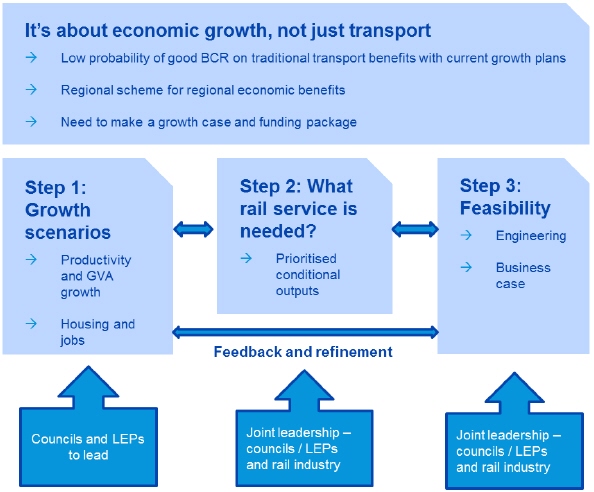 On 2 March 2017 the government published the long-awaited London and South Coast Rail Corridor study report. News headlines portrayed this as the death knell of a second main line to London, but in fact the study points the way forward for reopening between Uckfield and Lewes, and a new route between Stratford and East Croydon via Docklands. The diagram, taken from the report, shows the new approach recommended to justify re-opening Uckfield – Lewes.

The London and South Coast Rail Corridor Study was completed by WSP Parsons Brinckerhoff in April 2016, but the report has been held back until now, perhaps awaiting a private venture initiative. The key points from the report are:
Railfuture agrees with the recommendation that the improvements planned by Network Rail to the Brighton Main Line should go ahead. This will buy time for a second main line to be planned and built, although we consider that the conclusion that it will not be required for 30-40 years is optimistic, because it ignores the faster growth of employment than housing in London, assumes an unacceptable passenger density on Thameslink trains, and is based on unproven assumptions of the increased capacity that can be achieved with digital signalling.

Railfuture has been campaigning for reinstatement of the railway between Uckfield and Lewes, and building relationships with stakeholders to align them toward that goal. We have been advocating an incremental approach, which is the most likely to succeed within the constraints of Network Rail’s funding and delivery capacity, and be delivered soonest.

However the UK does not have enough skilled resources with rail experience for Network Rail to meet the increased demand for rail expansion, so prices have escalated and many mistakes have been made in the design, development and implementation of projects – for example Great Western electrification. This failure of Network Rail to deliver on time and budget has changed the game.

The government is now looking for innovative ways to finance, resource and share risk on more new rail infrastructure projects than Network Rail can handle. The National Infrastructure Commission gave a hint in its report on transport investment in London of a possible candidate – a ‘Crossrail 3’ linking the Lea Valley through Stratford and the Isle of Dogs to the Brighton Main Line. This is very similar to our concept for ‘Thameslink 2’, which is a separate but complementary project to Uckfield – Lewes.

Despite the conclusion that a new route is not required for 30-40 years, the Transport Secretary has met with and encouraged the promoters of London and Southern Counties Railway, a privately-funded consortium, to develop proposals for a new route linking Stratford, Docklands, and East Croydon with the Sussex Coast.

Railfuture supports this initiative which is similar to our Thameslink 2 concept and which may offer an additional route between London and Brighton.

The new approach to Uckfield-Lewes recommended by the study has the following steps:
In effect this is posing the question the other way round – what increase in housing, employment and productivity is needed to justify the rail service? The study proposed (before the consortium came forward) that the Local Enterprise Partnerships and local authorities should lead on this.

It has been suggested that the first step by the consortium will be a feasibility study. However, as the study indicates, the consortium will have to take different approaches to building a business case for the routes north and south of East Croydon.
Irrespective of who takes the lead, the LEPs and local authorities are key to the process as it is they that must agree the economic development and housing plans that will underpin the growth scenarios and so the business case for services on the Tunbridge Wells – Uckfield – Lewes – Brighton axis. Railfuture will continue to work to bring together the promoters and stakeholders to achieve a successful outcome.