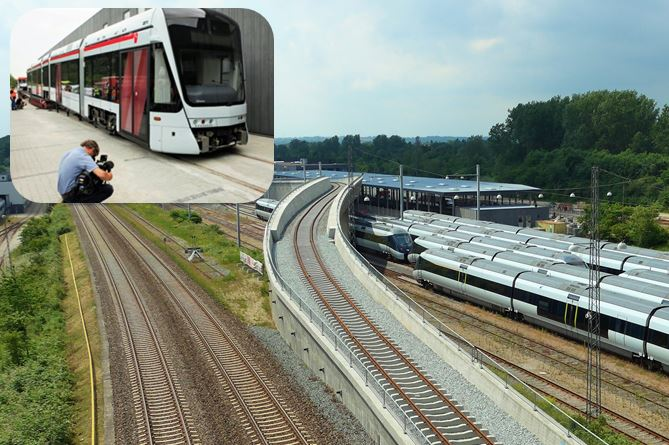 Thanks to a tramway building spree that has ended, Britain now has seven tram systems, all of which have substantial populations (apart from Blackpool – the only one that had never closed). Whilst extensions are being planned there are no new ones. In Denmark, where all of its tram system had closed (the last was Copenhagen, in 1972), it is now building it first new one, in Aarhus (tram vehicle and new tram bridge pictured – photos by Erland Egefors) for a population far smaller than the new systems in Britain. Is there a lesson here?
By the start of the 1960s, British towns and cities had closed almost all their tram networks. Some other European countries did likewise while many others still saw the advantages of rail-based electric transport in urban areas.

In Britain the past two decades have seen a modest reintroduction of the tram, sometimes incorporating rail tracks. Six new street-running tram systems have been opened since 1990 (2015/16 annual patronage is shown in brackets):


All of the above systems (plus Blackpool) are constructing, planning or considering extensions, although none are of significant length. There are no plans to build a new system anywhere in Britain. Between 2000 and 2006 four systems were given powers to be built (Bristol, South Hampshire, Leeds and Liverpool) but all were cancelled before construction commenced. Leeds is now the largest city in Europe without either a tram or a metro system.

Meanwhile, in Denmark tram systems are being revived. Construction started in September 2013 and in May 2017 trams will run in Denmark for the first time in 45 years. The system will be in Aarhus, the second largest city, which had a population of 330.639 in January 2016.

Aarhus initially had horse-drawn trams (operating between 1884 and 1895) that were replaced first by horse-drawn buses and then electric trams (in use between 1904 and 1971).

The opening of the new system in 2017 coincides with Aarhus being the European city of culture and banners hanging in the main shopping street already advertise that fact. The city's attractions (which include a mediaeval cathedral and impressive theatre) will also include the new light rail system, part funded by the Danish government with a contribution from the municipality of Aarhus. The cost is DEK 3.5 billion for infrastructure and rolling stock plus DEK 100 million for electrification of the DSB railway between Aarhus and Grenaa, which will be operated by tram-trains.

A route map showing the 12km of new tramway plus the newly electrified railway can be seen HERE.

The scheme involves a mixture of tram and tram-train with 49 stations in total. There will be 12 Variobahn trams sets (used from Aarhus main station, via Skejby and Lisbjerg to Lystrup) from Germany and 12 Tango tram-train sets from Switzerland. All sets are needed in service by May 2017.

Both types of vehicle will use 750kV DC overhead lines, presumably on the expectation that the DSB railway line is unlikely to be electrified at 25kV AC for many decades. In Britain the first tram-train, which could open around the same time as the Aarhus scheme, will be dual-mode to support both 750kV and 25kV for future compatibility, even though it too will initially operate only on 750kV.

Thursday 23 June 2016 was a historic day for Denmark’s transport as the very first tram arrived from Berlin, transported on a low loader. The articulated Variobahn tram is 32.56 metres long with low-floor access (385mm above street level). It was built at the Stadler plant in Velten just outside Berlin. At the time the Stadler Variobahn tram set had technically not been delivered and therefore the Stadler plant in Velten close to Berlin still owned it.

It can carry 84 seated passengers and a further 132 standing up and will have a maximum speed of 80 km/h (50 mph), which can be reached from stationary in 49 seconds. The staff who will operate it are being trained in Bergen, Norway, which has similar vehicles. Although the trams are mass-produced, the colour scheme and upholstery have been designed in Denmark.

A depot has been built on a former marshalling yard and the tram system (to be called Arhus Letbane which means Aarhus light rail) will run from new western suburbs through the city centre and then out to Grenaa on an existing local line that is currently diesel-worked. Therefore the vehicles are, effectively, tram-trains of the type pioneered two decades ago in the German city of Karlsruhe and since developed in several other continental cities.

Some new infrastructure has had to be built, such as a curving viaduct over the tracks, and some existing infrastructure is used, such as a tunnel under the main line that dates from the 1920s. The layout has also been designed so that the tram-trains do not conflict with the heavy container trains going to and from the city's port.

The trams will use a new platform in Aarhus' imposing central station, built in the late 1920s, with easy access to and from the square in front of it.

A lesson for Britain?

In Britain only the largest cities have been considered appropriate for trams, with buses (or even guided buses) seen by government as an adequate solution. The Aarhus system will be used by a population lower than any of the six new British systems.

The government first approved trams-trains in 2008 but only as a “trial” in case it didn’t work – despite it being fully proven in Germany and elsewhere – and it may, provided Network Rail can find solutions to its concerns, open in 2017. The Danish didn’t need a trial. Neither has their government or state-owned DSB caused numerous delays.

All is not lost in Britain. Following withdrawal of funding for a tramway in Leeds a cheaper trolley bus system – as used on the European mainland – was promoted only to be finally rejected by government as it seemed to offer little benefit. The good news for proponents of tram systems, which includes Railfuture, is that the trolleybus money is still available. The future may see tram-trains run into Leeds.

There are plenty of supporters for new tramways in Britain. UK Tram, which is the voice of the UK tram industry and represents operators, promoters, manufacturers, contractors and consultants, would like to see a scheme built in a medium-sized city. One of the best candidates may be Cambridge, which is assured of continued growth for decades to come and is rapidly becoming the IT and pharmaceuticals capital of the UK. Railfuture East Anglia has promoted a light-rail heart for its sub-regional Cambridge Metro proposal and light rail has the support of Cambridge Connect.

As well as promoting a bigger and better railway, Railfuture also campaigns to expand the tram network in Britain and promote tram-trains where appropriate.

The author acknowledges Erland Egefors and Trevor Garrod for their contributions to this article.