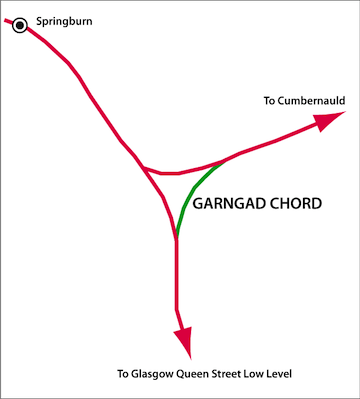 Passengers wanting to travel between Glasgow and Cumbernauld were warned that they had only a week to protest about changes to a rail upgrade which would make their journeys 10 minutes longer than they should be.

At issue is Transport Scotland and Network Rail’s decision to drop the Garngad chord from the Edinburgh Glasgow Improvement Programme, which includes electrifying 200 miles of track.

The curve, an essential part of the £1 billion EGIP, has been removed “to save £52 million” in the latest public consultation process which ends on Wednesday 30 November 2011.

Removing the curve from the plan erodes much of the benefit of electrifying the main Glasgow-Edinburgh lines and the Cumbernauld-Stirling-Alloa-Dunblane lines, and is a “slap in the face for rail users”.

Without the curve, rail campaigners warn that electric trains will have to reverse at Springburn, adding about 10 minutes to journey times.

They were encouraged that the issue has been taken up by MSP Jamie Hepburn who represents Cumbernauld and Kilsyth, and by The Herald newspaper.

North Lanarkshire Council has already protested to Network Rail over the plans to drop the curve from EGIP, and the RMT rail union has called for the curve to be reinstated.

The curve is a direct link between the Cumbernauld line, and North Clydeside electric routes.

Its removal will seriously handicap rail's competitiveness against car and express bus alternatives on the new M80.

Railfuture’s Ken Sutherland has urged residents and their representatives served by the Falkirk-Cumberanuld-Stepps-Glasgow commuter line to intensify their opposition before it is too late. The line has one million annual users.

This last week of the EGIP Consultation provides the final opportunity to demand restoration of the Garngad chord.

“Dropping the Garngad chord will require the 'antiquated tomfoolery' of the driver having to 'change ends' and reverse the train backwards into Queen Street low level station,” said Mr Sutherland.

The proposed scrapping of the Garngad Chord was widely recognised as a retrograde proposal and squandering of an opportunity for a significantly improved rail service across central Scotland.

He praised the lead taken by Jamie Hepburn, North Lanarkshire Council, the RMT rail union and other groups, currently pressing Transport Scotland and Network Rail to honour their previous commitment to this vital link.

It is simply 'not negotiable' if we are to significantly improve the rail service for the one million annual users of the Falkirk-Cumbernauld-Stepps-Glasgow line.

As recent as 2010, the Garngad chord was specifically included as an integral part of the EGIP project.