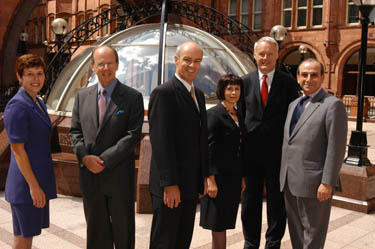 
The new Rail Regulator's board came into office on Tuesday 6 July 2004.


Jane May has wide experience as an executive and non-executive director across both the public and private sectors. She had a long career in Freemans, which she joined in 1978, becoming customer relations director in 1992. She joined Thames Water in the same role in 1994, where her role expanded to include direction of the customer field services division.

She left Thames in 2000, after also successfully setting up the marketing and business development division. She is currently a non-executive member of the advisory board set up by the Director General of Water Services, and also a non-executive director of the Public Guardianship Office and SITA environmental trust.


Jeffrey Jowell is Professor of Public Law at University College, London, and a former Vice-Provost of UCL and Dean of its Law Faculty. He is also a practising barrister at Blackstone Chambers. Professor Jowell is a leading authority on public law, and has written widely in that area.

In 2000, he was appointed by the Government as UK'’s first member of the Council of Europe'’s Commission for Democracy Through Law (The Venice Commission), and is now Vice Chairman of the commission. He is a member, since 2003, of the Royal Commission on Environmental Pollution. Professor Jowell has held visiting professorships in a number of universities outside of the UK, serves on the boards of various public bodies and legal journals and has advised on constitutional and administrative law matters in a number of countries.


Chairman of the Office of Rail Regulation was appointed Arbiter for the London Underground PPP in December 2002 for a four-year term, and continues in that post.

An economist by training, he joined the civil service in 1975 and worked as an economist in a number of departments, including HM Treasury and the Home Office.

From 1988 to 1989, he was part of the Department of the Environment team responsible for privatising the water industry and establishing its initial regulatory regime. He then joined Ofwat, the independent regulator for the water industry, as head of economic regulation.

He moved to the Office of the Rail Regulator in a similar role in 1994 and was Rail Regulator from December 1998 to July 1999. In July 1999, he joined Transco plc, the company which owns and operates the majority of Great Britain'’s gas transportation system, as regulation and corporate affairs director.

He was appointed to a new role of group director, regulation and public policy in Transco'’s parent company, Lattice Group plc, in November 2001. He left Lattice in October 2002 on completion of its merger with National Grid Group plc.


Chris Stokes has extensive experience of the railway industry. He joined British Rail in 1967, and worked in various management posts before becoming Deputy Director, Network South East in 1988. In 1993, he moved to the newly established Office of Passenger Rail Franchising (OPRAF) as Deputy Franchising Director, and had direct responsibility for the first phase of the sales process.

He was an executive director in the Strategic Rail Authority, which replaced OPRAF, before joining LEK Consulting in August 2000. Since July 2003, he has been an independent consultant on rail industry strategy. He is also a school governor.

Suzanne is a solicitor who, before joining the civil service, was first in private practice and then a lecturer in law at Manchester University. She is currently also a non-executive director of the Royal Brompton and Harefield NHS Trust, the Royal Institute of British Architects, and a member of the Council of the University of London.


Peter Bucks has, since 1997, been senior financial advisor at Ofgem (the Office of Gas and Electricity Markets). In 2000, he was also appointed corporate finance adviser at Ofwat (the Office of Water Services). At both organisations, he is responsible for advising the Regulator on financial matters affecting regulated companies in the respective sectors and for communication with financial markets.

Previously, Peter spent 30 years in investment banking in London and New York. From 1987 to 1998, he was a director of Hill Samuel Bank, providing corporate finance advice to a wide variety of clients, including close involvement in the UK privatisation programme. He was also a non-executive director of the British Marine Mutual group of insurance companies prior to its acquisition in 2000.