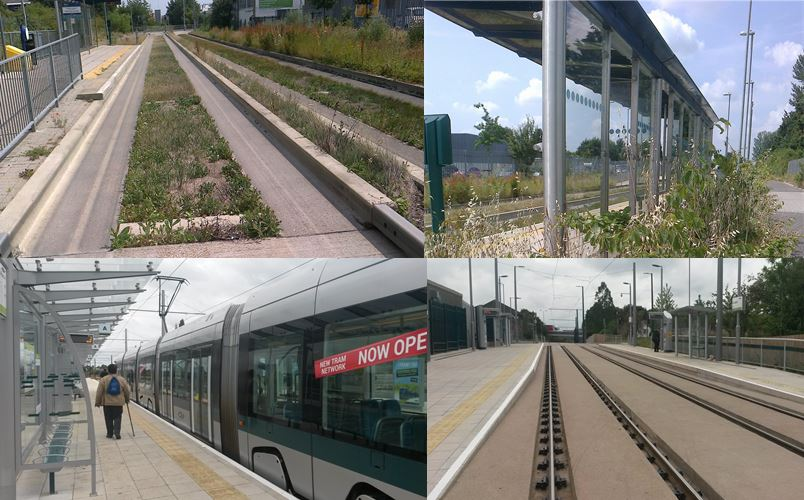 The good, the bad and the ugly? The much-criticised Cambridgeshire Guided Busway (top) and the new extension on the Nottingham Express Transit (bottom)

Railfuture has been a fierce opponent of the conversion of mothballed railway lines that have a strong case for reopening as part of the thriving and highly valued rail network into guided busways, which might feed into the railway but primarily provide a local transport system. The Cambridge to St Ives line and another for Luton to Dunstable have already been destroyed in order to run a bus service.

Despite the Scottish government having just rebuilt and reopened the Borders Railway (the longest stretch of new domestic railway for over a century) there is still an active bus lobby to close railways, with the Watford to St Albans Abbey line currently being mooted. In February 2015, Railfuture’s Nick Dibben wrote a personal article against Paving over the tracks. In this article Railfuture director Jerry Alderson, who campaigned strongly against the Cambridgeshire Guided Busway (dubbed the mis-guided busway) but lost, analyses the latest patronage figures that were released on 11th September 2015.

A Cambridge News article appears to be saying that by the end of June 2015, after 3 years, 10 months and 3 weeks of operation, the total number of passengers who have travelled on a busway bus (although it very clumsily, and quite erroneously, says “travelled on the busway”) hit 12,429,842.

The Cambridge headline of 12.5 million “busway journeys” – actually journeys on buses where that bus goes on the busway at some point even though the passenger might not – may sound impressive but it represents about 4 million journeys in year 4 (7th August 2014 to 6th August 2015) versus 3.6 million in year 3.

The year 3 target, stated at the public inquiry in 2004, was 3.6 million and it just hit it (well, within a whisker of it). A year later the patronage, according to the figures released, despite the frequency of the buses being increased, shows an increase of about 12%. That is little more than flat-lining.  In fact the signs were there more than a year ago as the year 3 versus 2 figures showed a much lower than year 2 versus year 1  (3.6m versus 2.7m, up 33%, compared to 2.7 versus 1.8m, up 50%).

This small increase is despite being in a growing region with a rising population and the local economy being vibrant. Moreover, rail patronage in the region continues to rise at impressive levels. A mere 12% increase so early in the life of a new scheme would be seen as disastrous performance for the railway in East Anglia.

So the buses are now seeing about 333,000 journeys a month, versus the 300,000 a year ago. Railfuture and the public will never know how many of those journeys make use of the guided busway because Stagecoach, Whippet and Cambridgeshire County Council refuse to say how many journeys there have been on the busway. The difference arises because the published figures simply count the number of people who board a busway bus regardless of where they board or alight. Someone who travels just within the city (e.g. bus station to railway station) or, say, just St Ives to Huntingdon, or Huntington to Peterborough, are included in these figures even though they never went on the busway at all. Given that buses are most heavily loaded in Cambridge city centre a reasonable guess of people who went on the busway (even if it was only the 50-metre stretch from Milton Road to the Science Park busway stop) may be about ten million journeys so far (or 80% of them) but it could be lower. Another often forgotten factor is that when the busway was opened some bus services were axed forcing passengers to use the new busway-branded buses, so one can’t even claim that all of these supposed ‘busway journeys’ are new journeys.

The Cambridge News was correct, however, in stating “Passenger numbers on the route are also likely to be boosted once the new town of Northstowe is built and more passengers are expected to use the busway when Cambridge's second rail station in Chesterton opens next year.” However, as people from, say, the Science Park, take the bus direct to the new station, and therefore saving significant time by not crawling through Cambridge’s streets on a bus to the main station, the total passenger kilometres on these buses may decrease. But fear not, because those figures have never been revealed to the public!

Many people hope that one day, to cater for the transport needs of the growing county, there will be a proper light rail system - Railfuture East Anglia’s Cambridge Metro suggests this – and the busway will be converted into light rail. What could it be like?

Comparing the Cambridgeshire Guided Busway and the two brand new Nottingham tram extensions the two experiences were worlds apart. From a bus bouncing up and down a weed-infested and crumbling busway to an enormously comfortable journey on an incredibly clean tramway with stylish and sleek trams. Even the beautifully-designed and multi-functional ticket machines on the Nottingham tram system (which include built-in help points and passenger information displays) were in a different league to the regularly vandalised busway machines that no longer accept cash. Another bonus was that unlimited use for a day on the 32km-long tram system was £4 (£4.50 with all buses included), much less than the £6.40 busway ‘dayrider’ ticket.

One positive thing to say about the busway buses, though, is that they have Wi-Fi and power-sockets, unlike the brand new trams. That’s a quite disgraceful omission in 2015.

The Cambridgeshire Guided Busway passenger numbers predicted before it opened were as follows:

Year 1’s pessimistic (*) figure was 1.8 million. Unsurprisingly it achieved 40% more than this.

Year 3’s target was 3.6 million, which requires 300,000 passengers per month or 10,000 a day. It came within a whisker of achieving it. No predictions were made for future years, although once the much-delayed Northstowe new town (with 8,000 to 10,000 homes) was fully complete and occupied then 20,000 journeys a day were predicted (according to the public inquiry back in 2004).

(*) Note: government gives approval for a scheme based on year three figures and beyond. It is a common game for promoters to estimate very low targets in years one and two because it will not affect the funding approval but it will generate very positive news stories when targets are dramatically exceeded. This ‘trick’ is used on rail-based schemes as well.