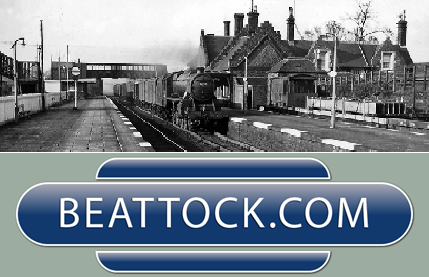 The above totem sign is the logo of the The Beattock Station Action Group, which was set-up to promote the reopening of Beattock Station (historical photo from Wikipedia) for the benefit of local people. They see it as essential to regenerate Beattock, Moffat and the surrounding areas. It is one of Railfuture Scotland’s priority aspirations, and Railfuture is considering making a Fighting Fund award towards it.

The Campaign to re-open Beattock Station, which was closed in 1972, was boosted in December 2014 by a visit from the Scottish Transport Minister, accompanied by representatives from SWestrans and Transport Scotland, to hear from the Action Group why they believe re-opening the station is essential for the local community and the surrounding area.

Martin Brown, Group Chair, said “Moffat and Beattock are the hub of activity for travel, tourism and economic activity in south west Scotland. The only thing we don’t have is a train that stops here.

“We presented our business case to the Minister and outlined what we’ve done so far.  He was very keen to hear why this means so much to the community and was interested in exploring four potential routes, including Liverpool to Glasgow or Liverpool to Edinburgh”.

Earlier, the Group had met senior management from First Transpennine Express as part of its campaign strategy.  This was an extremely positive meeting, resulting in a number of constructive ideas to help the campaign.  The Lead Officer for SWestrans, the region’s transport partnership, said “The re-opening of Beattock Station remains an aspiration within the Regional Transport Strategy for the county.  SWestrans and Dumfries and Galloway Council have included Beattock Station as one of the potential projects for bid development for grant funding under the Scottish Stations Fund”.

Railfuture Scotland’s top 50 stations list can be obtained from http://www.railfuture.org.uk/DL896.

The Scottish Stations Investment Fund (SSIF) was launched in April 2012 to provide a £30 million fund to support new railway stations and existing station refurbishments in Scotland. Transport Scotland is looking for bids from communities and developers to enhance railway stations and deliver new ones. It will be operational from 2014.