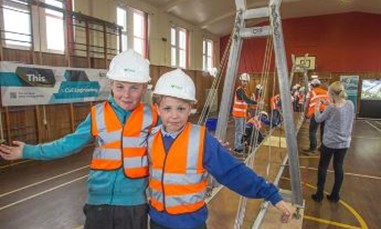 Over 500 pupils from 13 primary schools across the Scottish Borders and Midlothian have had the chance to get hands-on engineering experience thanks to the Borders Railway ‘Bridges to Schools’ project, supported by the ICE

In this week of the referendum it seems like the most frequently used word by the UK media is “Scotland”. There have also been a series of positive news stories about Scotland’s railway, which Railfuture Scotland chair, Allison Cosgrove lists below.

BRIDGES TO SCHOOLS IN THE BORDERS

Scotland’s First Minister, Alex Salmond, announced recently that the long-awaited Borders Railway would commence operations on 6 September 2015, less than a year to go.  He also asked that communities along the railway plan to stage parties in celebration of the event – with the prize of a Golden Ticket for a journey on the first day!

Rails will be land on about 30 miles of the route before the end of the year.

A new deal designed to boost the social, economic and environmental benefits of rail travel across East Lothian has been agreed between East Lothian Council and First Scotrail.  The two parties signed a concordat agreeing to work together  to maintain and enhance rail services across the county.  The first agreement of its kind in Scotland commits Scotrail and the local authority to a close working relationship, encouraging economic growth, getting people to work, connecting communities and businesses and opening up leisure opportunities. (Source – East Lothian Courier)

In late May it was announced by Scottish transport minister Keith Brown that Serco won the contract to run Caledonian sleeper service for 15 years from April 2015 with promises of hotel-style cabins with en suite bathrooms, as well as a top-notch dining service serving Scottish produce. Now Railfuture, along the rail users who make 83 million passenger journeys per year, are waiting to hear the future of the Scotrail franchise and what it will offer them. An announcement of the new franchisee from 1 April 2015, for up to 10 years, is expected in the first or second week of October. Railfuture Scotland will be issuing a press release once the award has been announced.